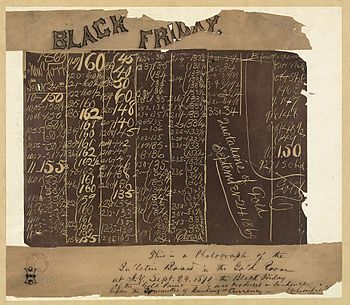 Photograph of the black board in the New York Gold Room, September 24, 1869, showing the collapse of the price of gold. Handwritten caption by James A. Garfield indicates it was used as evidence before the Committee of Banking & Currency during hearings in 1870.

Black Friday, September 24, 1869 was caused by the efforts of two speculators, Jay Gould and James Fisk, to corner the gold market on the New York Gold Exchange.[1] It was one of several scandals that rocked[ambiguous] the presidency of Ulysses S. Grant.

During the reconstruction era after the American Civil War, the United States government issued a large amount of public debt to finance construction. This included the issuing of fiat greenbacks, not backed by gold, but were required to be accepted for the payment of federal debt. It was generally believed that the U.S. Government would ultimately redeem the “greenbacks” with gold. In 1869, a group of speculators, headed by James Fisk and Jay Gould, sought to profit from this by cornering the gold market. Gould and Fisk first recruited Grant’s brother-in-law, a financier named Abel Corbin. They used Corbin to get close to Grant in social situations, where they would argue against government sale of gold, and Corbin would support their arguments. Corbin convinced Grant to appoint General Daniel Butterfield as assistant Treasurer of the United States. Butterfield agreed to tip the men off when the government intended to sell gold.

In the late summer of 1869, Gould began buying large amounts of gold. He never sold this gold. This caused prices to rise and stocks to plummet.[2] After Grant realized what had happened, the federal government sold $4 million in gold. On September 20, 1869, Gould and Fisk started hoarding gold, driving the price higher. On September 24 the premium on a gold Double Eagle (representing 0.9675 troy ounces (30.09 g) of gold bullion at $20) was 30 percent higher than when Grant took office. But when the government gold hit the market, the premium plummeted within minutes. Investors scrambled to sell their holdings, and many of them, including Corbin, were ruined. Fisk and Gould escaped significant financial harm.

The subsequent Congressional investigation was chaired by James A. Garfield. The investigation was alleged on the one hand to have been limited because Virginia Corbin and First Lady Julia Grant were not permitted to testify. Garfield's biographer, Alan Peskin, however, maintains the investigation was quite thorough. Butterfield resigned from the U.S. Treasury. Henry Adams, who believed that President Ulysses S. Grant had tolerated, encouraged, and perhaps even participated in corruption and swindles, attacked Grant in an 1870 article entitled The New York Gold Conspiracy.[3] Grant's suspected involvement also led his presidency to be called the Era of Good Stealings.

Although Grant was not directly involved in the scandal, his personal association with Gould and Fisk gave clout to their attempt to manipulate the gold market. Also, Grant's order to release gold in response to gold's rising price was itself a manipulation of the market. Grant had personally declined to listen to Gould's ambitious plan to corner the gold market, since the scheme was not announced publicly, but he[who?] could not be trusted. Gould had promoted the plan to Grant as a means to help farmers sell a bountiful 1869 wheat crop to Europe.[4][clarification needed]

A highly fictionalized account of Fisk's life, culminating in a dramatic presentation of the gold corner, was shown in the 1937 film The Toast of New York.