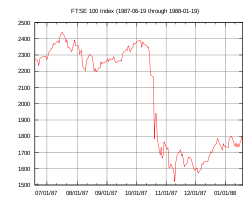 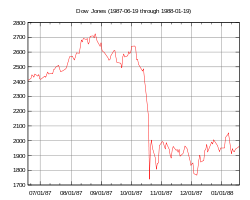 In finance, Black Monday refers to Monday, October 19, 1987, when stock markets around the world crashed, shedding a huge value in a very short time. The crash began in Hong Kong and spread west to Europe, hitting the United States after other markets had already declined by a significant margin. The Dow Jones Industrial Average (DJIA) fell exactly 508 points to 1,738.74 (22.61%).[1] In Australia and New Zealand, the 1987 crash is also referred to as "Black Tuesday" because of the time zone difference.

The terms Black Monday and Black Tuesday are also respectively applied to October 28 and October 29, 1929, which occurred after Black Thursday on October 24, which started the Stock Market Crash of 1929. 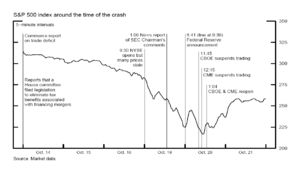 Timeline compiled by the Federal Reserve.

In late 1985 and early 1986, the United States economy began shifting from a rapidly growing recovery from the early 1980s recession to a slower growing expansion, which resulted in a brief "soft landing" period as the economy slowed and inflation dropped. The stock market advanced significantly, with the Dow peaking in August 1987 at 2,722 points, or 44% over the previous year's closing of 1,895 points. Further financial uncertainty may have resulted from the collapse of OPEC in early 1986, which led to crude oil price decreasing by more than 50% by mid-1986.[2]

On Thursday, October 15, 1987, Iran hit the American-owned supertanker, the Sungari, with a Silkworm missile off Kuwait's main Mina Al Ahmadi oil port. The next morning, Iran hit another ship, the U.S. flagged MV Sea Isle City, with another Silkworm missile.

On Friday, October 16, when all the markets in London were unexpectedly closed due to the Great Storm of 1987, the DJIA fell 108.35 points (4.6%) to close at 2,246.74 on record volume. Then-Treasury Secretary James Baker stated concerns about the falling prices.

The crash began in Far Eastern markets the morning of October 19. Later that morning, two U.S. warships shelled an Iranian oil platform in the Persian Gulf in response to Iran's Silkworm missile attack on the Sea Isle City.[3][4]

Following the stock market crash, a group of 33 eminent economists from various nations met in Washington, D.C. in December 1987, and collectively predicted that "the next few years could be the most troubled since the 1930s".[9] However, the economy was barely affected and growth actually increased throughout 1987 and 1988, with the DJIA regaining its pre-crash closing high of 2,722 points in early 1989.

However the rapid rebound of the stock market largely depended on the S&L business, which was already under scrutiny before its mid-1989 collapse, sending the economy to a "hard landing" phase late that summer. This, along with the abrupt demise of the leveraged buyout craze (which led to the Friday the 13th mini-crash) brought a five-year depression late that year.

A popular explanation for the 1987 crash was selling by program traders, most notably as a reaction to the computerized selling required by portfolio insurance hedges.[10] However, economist Dean Furbush points out that the biggest price drops occurred when trading volume was light.[11] In program trading, computers perform rapid stock executions based on external inputs, such as the price of related securities. Common strategies implemented by program trading involve an attempt to engage in arbitrage and portfolio insurance strategies. As computer technology became more available, the use of program trading grew dramatically within Wall Street firms. After the crash, many blamed program trading strategies for blindly selling stocks as markets fell, exacerbating the decline. Some economists theorized the speculative boom leading up to October was caused by program trading, and that the crash was merely a return to normalcy. Either way, program trading ended up taking the majority of the blame in the public eye for the 1987 stock market crash. U.S. Congressman Edward J. Markey, who had been warning about the possibility of a crash, stated that "Program trading was the principal cause."[12]

The internal reasons included innovations with index futures and portfolio insurance. I've seen accounts that maybe roughly half the trading on that day was a small number of institutions with portfolio insurance. Big guys were dumping their stock. Also, the futures market in Chicago was even lower than the stock market, and people tried to arbitrage that. The proper strategy was to buy futures in Chicago and sell in the New York cash market. It made it hard – the portfolio insurance people were also trying to sell their stock at the same time.[13]

During the financial turmoil, the Federal Reserve encouraged banks to continue to lend to one another on their usual terms. The banks did this at a loss, but it preserved the system as a whole. Some experts argue the Fed's response to Black Monday ushered in a new era of investor confidence in the central bank's ability to calm severe market downturns.[14]