In the predominantly Oriental (Far Eastern) tradition of martial arts, the black belt is a way to describe a graduate of a field where a practitioner's level is often marked by the color of the belt. The black belt is commonly the highest belt color used and denotes a degree of competence. It is often associated with a teaching grade though frequently not the highest grade or the "expert" of public perception.[1] It is also a relatively recent invention (dating from the late 19th century) rather than an ancient custom.[2] 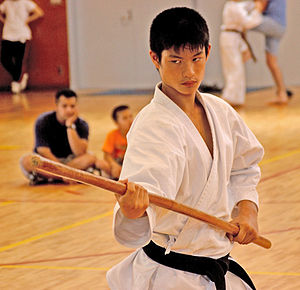 The systematic use of belt color to denote the rank was first used in Japan by Jigoro Kano, the founder of judo, who first devised the colored belt system using obi (sash), and awarded the first black belts to denote a Dan rank in the 1880s. Previously, Japanese Koryu instructors tended to provide certificates.[3] Initially the wide obi was used; as practitioners trained in kimono, only white and black obi were used. It was not until the early 1900s, after the introduction of the judogi, that an expanded colored belt system of awarding rank was created.[2] Other martial arts later adopted the custom or a variation of it (e.g., using colored sashes) to denote rank. This includes martial arts that traditionally did not have a formalized rank structure. This kind of ranking is less common in arts that do not claim a far eastern origin, though it is used in the Marine Corps Martial Arts Program.

Rank and belts are not equivalent between arts, styles, or even within some organizations. In some arts, a black belt is expected in three years, while in others ten years may be common. Testing for black belt is commonly more rigorous and more centralized than for lower grades.

In contrast to the "black belt as master" stereotype, a black belt commonly indicates the wearer is competent in a style's basic technique and principles.[2] Since in many styles a black belt takes approximately three to six years of training to achieve, a good intuitive analogy would be a bachelor's degree: the student has a good understanding of concepts and ability to use them but has not yet perfected their skills. In this analogy a master's degree and a doctorate would represent advancement past the first degree.

Another way to describe this links to the terms used in Japanese arts; shodan (for a first degree black belt), means literally the first/beginning step, and the next grades, nidan and sandan are each numbered as "ni" is two and "san" is three, meaning second step, third step, etc. The shodan black belt is not the end of training but rather as a beginning to advanced learning: the individual now "knows how to walk" and may thus begin the "journey".

As a 'black belt' is commonly viewed as conferring some status, achieving one has been used as a marketing 'gimmick', for example a guarantee of being awarded one within a specific period or if a specific amount is paid.[4] Some schools place profit ahead of ability when using these tactics and are sometimes referred to as McDojos.[5]

In some Japanese schools, after obtaining a black belt the student also begins to instruct, and may be referred to as a senpai (senior student) or sensei (teacher). In others, a black belt student should not be called sensei until they are sandan (third degree black belt), or the titles kyosa or Sabomnim in Korean martial arts as second degree or higher, as this denotes a greater degree of experience and a sensei must have this and grasp of what is involved in teaching a martial art.

In Japanese martial arts the further subdivisions of black belt ranks may be linked to dan grades and indicated by 'stripes' on the belt. Yūdansha (roughly translating from Japanese to "person who holds a dan grade") is often used to describe those who hold a black belt rank. While the belt remains black, stripes or other insignia may be added to denote seniority, in some arts, very senior grades will wear differently colored belts. In judo and some forms of karate, a sixth dan will wear a red and white belt. The red and white belt is often reserved only for ceremonial occasions, and a regular black belt is still worn during training. At 9th or 10th dan some schools award red. In some schools of Jujutsu, the Shihan rank and higher wear purple belts. These other colors are often still referred to collectively as 'black belts'.[4][6]