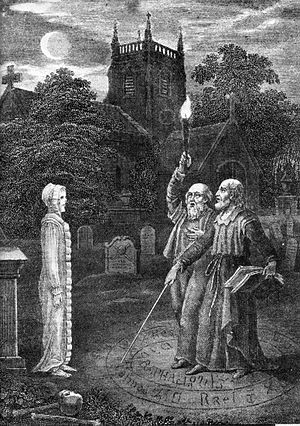 John Dee and Edward Kelley using a magic circle ritual to invoke a spirit in a church grave yard.

Black magic or dark magic has traditionally referred to the use of supernatural powers or magic for evil and selfish purposes.[1] With respect to the left-hand path and right-hand path dichotomy, black magic is the malicious, left-hand counterpart of benevolent white magic. In modern times, some find that the definition of "black magic" has been convoluted by people who define magic or ritualistic practices that they disapprove of as "black magic".[2]

Like its counterpart white magic, the origins of black magic can be traced to the primitive, ritualistic worship of spirits as outlined in Robert M. Place's 2009 book, Magic and Alchemy.[3] Unlike white magic, in which Place sees parallels with primitive shamanistic efforts to achieve closeness with spiritual beings, the rituals that developed into modern "black magic" were designed to invoke those same spirits to produce beneficial outcomes for the practitioner. Place also provides a broad modern definition of both black and white magic, preferring instead to refer to them as "high magic" (white) and "low magic" (black) based primarily on intentions of the practitioner employing them. He acknowledges, though, that this broader definition (of "high" and "low") suffers from prejudices as good-intentioned folk magic may be considered "low" while ceremonial magic involving expensive or exclusive components may be considered by some as "high magic", regardless of intent.[3][4]

During the Renaissance, many magical practices and rituals were considered evil or irreligious and by extension, "black magic" in the broad sense. Witchcraft and non-mainstream esoteric study were prohibited and targeted by the Inquisition.[5] As a result, natural magic developed as a way for thinkers and intellectuals, like Marsilio Ficino, abbot Johannes Trithemius and Heinrich Cornelius Agrippa, to advance esoteric and ritualistic study (though still often in secret) without significant persecution.[5]

While "natural magic" became popular among the educated and upper classes of the 16th and 17th century, ritualistic magic and folk magic remained subject to persecution. 20th century author Montague Summers generally rejects the definitions of "white" and "black" magic as "contradictory", though he highlights the extent to which magic in general, regardless of intent, was considered "dark" or "black" and cites William Perkins posthumous 1608 instructions in that regard:[6]

All witches "convicted by the Magistrate" should be executed. He allows no exception and under this condemnation fall "all Diviners, Charmers, Jugglers, all Wizards, commonly called wise men or wise women". All those purported "good Witches which do not hurt but good, which do not spoil and destroy, but save and deliver" should come under the extreme sentence.

In particular, though, the term was most commonly reserved for those accused of invoking demons and other evil spirits, those hexing or cursing their neighbours, those using magic to destroy crops and those capable of leaving their earthly bodies and travelling great distances in spirit (to which the Malleus Maleficarum, "devotes one long and important chapter"). Summers also highlights the etymological development of the term nigromancer, in common use from 1200 to approximately 1500, (Latin: Niger, black; Greek: Manteia, divination), broadly "one skilled in the black arts".[6]

In a modern context, the line between "white magic" and "black magic" is somewhat clearer and most modern definitions focus on intent rather than practice.[3] There is also an extent to which many modern Wicca and witchcraft practitioners have sought to distance themselves from those intent on practising black magic. Those who seek to do harm or evil are less likely to be accepted into mainstream Wiccan circles or covens in an era where benevolent magic is increasingly associated with new-age gnosticism and self-help spiritualism.[7] 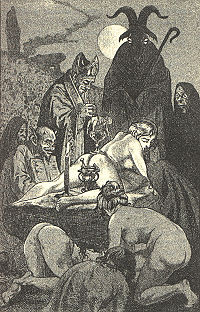 Illustration by Martin van Maële, of a Witches' Sabbath, in the 1911 edition of La Sorciere, by Jules Michelet.
Main article: Satanism

The influence of popular culture has allowed other practices to be drawn in under the broad banner of "black magic" including the concept of Satanism. While the invocation of demons or spirits is an accepted part of black magic, this practice is distinct from the worship or deification of such spiritual beings.[7]

Those lines, though, continue to be blurred by the inclusion of spirit rituals from otherwise "white magicians" in compilations of work related to Satanism. John Dee's 16th century rituals, for example, were included in Anton LaVey's The Satanic Bible (1969) and so some of his practises, otherwise considered white magic, have since been associated with black magic. Dee's rituals themselves were designed to contact spirits in general and angels in particular, which he claimed to have been able to do with the assistance of colleague Edward Kelley. LaVey's Bible, however, is a "complete contradiction" of Dee's intentions but offers the same rituals as a means of contact with evil spirits and demons.[8] Interestingly, LaVey's Church of Satan (with LaVey's Bible at its centre), "officially denies the efficacy of occult ritual" but "affirms the subjective, psychological value of ritual practice", drawing a clear distinction between.[8] LaVey himself was more specific:

White magic is supposedly utilized only for good or unselfish purposes, and black magic, we are told, is used only for selfish or "evil" reasons. Satanism draws no such dividing line. Magic is magic, be it used to help or hinder. The Satanist, being the magician, should have the ability to decide what is just, and then apply the powers of magic to attain his goals.

Satanism is not a white light religion; it is a religion of the flesh, the mundane, the carnal - all of which are ruled by Satan, the personification of the Left Hand Path.

The latter quote, though, seems to have been directed toward the growing trends of Wiccanism and neo-paganism at the time.[8] 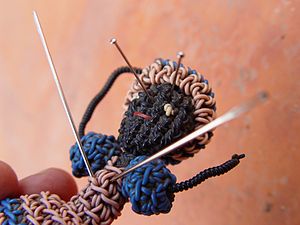 Voodoo, too, has been associated with modern "black magic"; drawn together in popular culture and fiction. However, while hexing or cursing may be accepted black magic practices, Voodoo has its own distinct history and traditions that have little to do with the traditions of modern witchcraft that developed with European practitioners like Gerald Gardner and Aleister Crowley.[7][9][10]

In fact, Voodoo tradition makes its own distinction between black and white magic, with sorcerers like the Bokor known for using magic and rituals of both. But their penchant for magic associated with curses, poisons and zombies means they, and Voodoo in general, are regularly associated with black magic in particular.[11]

The links and interaction between black magic and religion are many and varied. Beyond black magic's links to organised Satanism or its historical persecution by Christianity and its inquisitions, there are links between religious and black magic rituals. The Black Mass, for example, is a sacrilegious parody of the Catholic Mass. Likewise, a saining, though primarily a practice of white magic, is a Wiccan ritual analogous to a christening or baptism for an infant.[12][13]

In Islam, al-Falaq is recited to protect against sorcery.

The lowest depths of black mysticism are well-nigh
as difficult to plumb as it is arduous to scale
the heights of sanctity. The Grand Masters of
the witch covens are men of genius - a foul genius,
crooked, distorted, disturbed, and diseased.

In popular culture and fiction

Concepts related to black magic or described, even inaccurately, as "black magic" are a regular feature of books, films and other popular culture. Examples include: