From Infogalactic: the planetary knowledge core
Jump to: navigation, search
This article is about the traditional food made with pork blood. For the fictional creature, see Black pudding (Dungeons & Dragons). 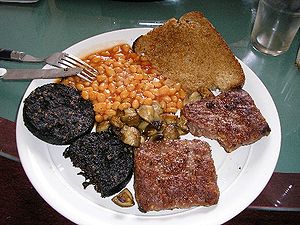 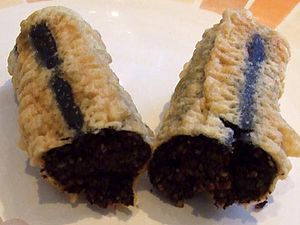 Black pudding[note 1] is a type of blood sausage commonly eaten in Great Britain, Ireland and in other parts of Europe.[note 2] It is generally made from pork fat or beef suet, pork blood and a relatively high proportion of oatmeal, in some recipes mixed with grits (oat groats) and sometimes even barley groats. Black pudding pre-sliced may still have a plastic wrap around the circumference that must be removed before cooking.

Black pudding is often grilled, fried, baked or boiled in its skin. It can be eaten cold as it is cooked in production. It was occasionally flavoured with pennyroyal, differing from continental European versions in its relatively limited range of ingredients and reliance on oatmeal and barley instead of onions or chitterlings to absorb and be mixed with the blood.[1]

In the United Kingdom,[2] black pudding is considered a delicacy in the Black Country, the West Midlands, Stornoway, the North West, and especially in Greater Manchester (in towns such as Bury), where it is traditionally boiled and served with malt vinegar out of paper wrapping.[3] The Stornoway black pudding, made in the Western Isles of Scotland, has been granted Protected Geographical Indicator of Origin status. In the wake of this designation, butchers in Bury sought to demonstrate their history of manufacturing and selling the product. One such claim dates back to 1810.[4]

Black puddings are also served sliced and fried or grilled as part of a traditional full breakfast in much of the UK and Ireland, a tradition that followed British and Irish emigrants around the world. Black pudding is now part of the local cuisine of the Canadian provinces of Nova Scotia and Newfoundland and Labrador.[5]

In Scotland and the north of England, chip shops commonly sell black pudding battered and deep-fried. Prepared in this way, it is eaten as a meal with chips, replacing the better-known battered fish.

Novel culinary uses for black pudding include black pudding ice cream,[6] while perhaps more conventional modern recipes include using it as an accompaniment to pigeon.[7]

Black pudding is a good source of protein, is low in carbohydrate and high in zinc and iron but is also high in saturated fat and cholesterol.[8]

In 2016, black pudding was labelled as a "superfood" due to its high iron, fat and protein content.[9] However this was an erroneous claim, based not on scientific research but on a marketing study of customer web searches.[10]

Since the 1980s, the World Black Pudding Throwing Championships has been held in Ramsbottom.[11] The humorous competition invokes the traditional Lancashire – Yorkshire rivalry, with participants throwing the black puddings at piles of Yorkshire puddings.[12] It takes place annually in September, and draws thousands of competitors and spectators to the town.[13]

In past years the Bacup Food and Black Pudding Festival has been held in Bacup.[14][6]

The "Manchester Egg" is a modern variant of the Scotch egg.[15] It features Lancashire black pudding encasing a pickled egg.[16][17]