From Infogalactic: the planetary knowledge core
Jump to: navigation, search
This article is about the bramble fruit. For the tree fruit see Morus nigra. For the smartphone and its manufacturer, see BlackBerry and BlackBerry Limited. For other uses, see Blackberry (disambiguation).
Not to be confused with black raspberry.

The blackberry is an edible fruit produced by many species in the Rubus genus in the Rosaceae family, hybrids among these species within the Rubus subgenus, and hybrids between the Rubus and Idaeobatus subgenera. The taxonomy of the blackberries has historically been confused because of hybridization and apomixis, so that species have often been grouped together and called species aggregates. For example, the entire subgenus Rubus has been called the Rubus fruticosus aggregate, although the species R. fruticosus is considered a synonym of R. plicatus.[1]

The term 'bramble', a word meaning any impenetrable thicket, has traditionally been applied specifically to the blackberry or its products,[2] though in the United States it applies to all members of the Rubus genus. In the western US, the term caneberry is used to refer to blackberries and raspberries as a group rather than the term bramble.

The usually black fruit is not a berry in the botanical sense of the word. Botanically it is termed an aggregate fruit, composed of small drupelets. It is a widespread and well-known group of over 375 species, many of which are closely related apomictic microspecies native throughout Europe, northwestern Africa, temperate western and central Asia and North and South America.[3]

In its first year, a new stem, the primocane, grows vigorously to its full length of 3–6 m (in some cases, up to 9 m), arching or trailing along the ground and bearing large palmately compound leaves with five or seven leaflets; it does not produce any flowers. In its second year, the cane becomes a floricane and the stem does not grow longer, but the lateral buds break to produce flowering laterals (which have smaller leaves with three or five leaflets).[4] First- and second-year shoots usually have numerous short-curved, very sharp prickles that are often erroneously called thorns. These prickles can tear through denim with ease and make the plant very difficult to navigate around. Prickle-free cultivars have been developed. Recently the University of Arkansas has developed primocane fruiting blackberries that grow and flower on first-year growth much as the primocane-fruiting (also called fall bearing or everbearing) red raspberries do.

The flowers are produced in late spring and early summer on short racemes on the tips of the flowering laterals.[4] Each flower is about 2–3 cm in diameter with five white or pale pink petals.[4]

The drupelets only develop around ovules that are fertilized by the male gamete from a pollen grain. The most likely cause of undeveloped ovules is inadequate pollinator visits.[6] Even a small change in conditions, such as a rainy day or a day too hot for bees to work after early morning, can reduce the number of bee visits to the flower, thus reducing the quality of the fruit. Incomplete drupelet development can also be a symptom of exhausted reserves in the plant's roots or infection with a virus such as Raspberry bushy dwarf virus. 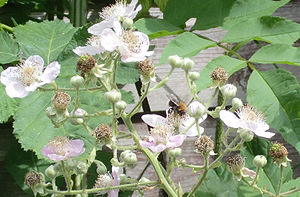 Blackberry leaves are food for certain caterpillars; some grazing mammals, especially deer, are also very fond of the leaves. Caterpillars of the concealer moth Alabonia geoffrella have been found feeding inside dead blackberry shoots. When mature, the berries are eaten and their seeds dispersed by several mammals, such as the red fox and the Eurasian badger, as well as by small birds.[7] 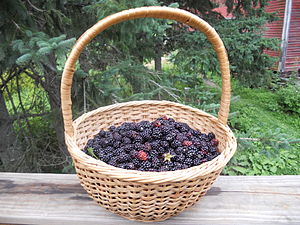 A basket of wild blackberries

Blackberries grow wild throughout most of Europe. They are an important element in the ecology of many countries, and harvesting the berries is a popular pastime. However, the plants are also considered a weed, sending down roots from branches that touch the ground, and sending up suckers from the roots. In some parts of the world without native blackberries, such as in Australia, Chile, New Zealand, and the Pacific Northwest of North America, some blackberry species, particularly Rubus armeniacus (Himalayan Blackberry) and Rubus laciniatus (Evergreen Blackberry), are naturalised and considered an invasive species and a serious weed.[3]

Blackberry fruit are red before they are ripe, leading to an old expression that "blackberries are red when they're green".

As there is forensic evidence from the Iron Age Haraldskær Woman that she consumed blackberries some 2500 years ago, it is reasonable to conclude that blackberries have been eaten by humans over thousands of years.

American cultivated blackberries (R. laciniatus and R. ursinus) are notable for their significant contents of dietary fiber, vitamin C, and vitamin K (table).[8] A 100 gram serving of raw blackberries supplies 43 calories and 5 grams of dietary fiber or 25% of the recommended Daily Value (DV) (table).[8] In 100 grams. vitamin C and vitamin K contents are 25% and 19% DV, respectively, while other essential nutrients are low in content (table). 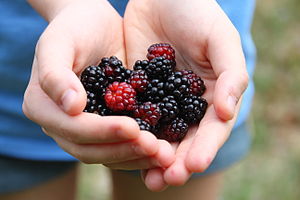 Wild blackberries picked in May in North Central Texas

The soft fruit is popular for use in desserts, jams, seedless jelly, and sometimes wine. It is often mixed with apples for pies and crumbles. Blackberries are also used to produce candy.

Phytochemical components of blackberries, salicylic acid and ellagic acid have been associated in preliminary research with toxicity to cancer cells,[12][13] including breast cancer cells.[14]

Blackberries rank highly among fruits for in vitro antioxidant strength, particularly because of their dense content of polyphenolic compounds, such as ellagic acid, tannins, ellagitannins, quercetin, gallic acid, anthocyanins, and cyanidins.[15][16] One report placed blackberry at the top of more than 1000 polyphenol-rich foods consumed in the United States,[17] but this concept of a health benefit from consuming darkly colored foods like blackberries remains scientifically unverified and not accepted for health claims on food labels.[18] 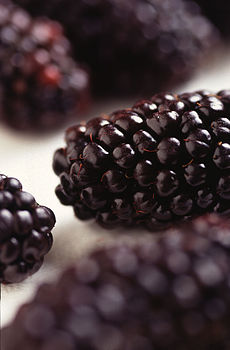 Worldwide, Mexico is the leading producer of blackberries, with nearly the entire crop being produced for export into the off-season fresh markets in North America and Europe. The Mexican market is almost entirely from the cultivar 'Tupy' (often spelled 'Tupi', but the EMBRAPA program in Brazil from which it was released prefers the 'Tupy' spelling). In the US, Oregon is the leading commercial blackberry producer, producing 42.6 million pounds on 6,180 acres (25.0 km2), in 1995[19] and 56.1 million pounds on 7,000 acres (28 km2) in 2009.[20]

Numerous cultivars have been selected for commercial and amateur cultivation in Europe[3] and the United States.[21] Since the many species form hybrids easily, there are numerous cultivars with more than one species in their ancestry.

'Marion' (marketed as "marionberry") is an important cultivar that was selected from seedlings from a cross between 'Chehalem' and 'Olallie' (commonly called "Olallieberry") berries.[22] 'Olallie' in turn is a cross between loganberry and youngberry. 'Marion', 'Chehalem' and 'Olallie' are just three of many trailing blackberry cultivars developed by the United States Department of Agriculture Agricultural Research Service (USDA-ARS) blackberry breeding program at Oregon State University in Corvallis, Oregon.

The most recent cultivars released from this program are the prickle-free cultivars 'Black Diamond', 'Black Pearl', and 'Nightfall' as well as the very early-ripening 'Obsidian' and 'Metolius'. 'Black Diamond' is now the leading cultivar being planted in the Pacific Northwest. Some of the other cultivars from this program are 'Newberry', 'Waldo', 'Siskiyou', 'Black Butte', 'Kotata', 'Pacific', and 'Cascade'.[23]

Trailing blackberries are vigorous and crown forming, require a trellis for support, and are less cold hardy than the erect or semi-erect blackberries. In addition to the United States's Pacific Northwest, these types do well in similar climates such as the United Kingdom, New Zealand, Chile, and the Mediterranean countries.

Semi-erect, prickle-free blackberries were first developed at the John Innes Centre in Norwich, UK, and subsequently by the USDA-ARS in Beltsville, Maryland. These are crown forming and very vigorous and need a trellis for support. Cultivars include 'Black Satin' 'Chester Thornless', 'Dirksen Thornless', 'Hull Thornless', 'Loch Maree', 'Loch Ness', 'Loch Tay', 'Merton Thornless', 'Smoothstem', and 'Triple Crown'.[24] Recently, the cultivar 'Cacanska Bestrna' (also called 'Cacak Thornless') has been developed in Serbia and has been planted on many thousands of hectares there.

The University of Arkansas has developed cultivars of erect blackberries. These types are less vigorous than the semi-erect types and produce new canes from root initials (therefore they spread underground like raspberries). There are prickly and prickle-free cultivars from this program, including 'Navaho', 'Ouachita', 'Cherokee', 'Apache', 'Arapaho', and 'Kiowa'.[25][26] They are also responsible for developing the primocane fruiting blackberries such as 'Prime-Jan' and 'Prime-Jim'.[25]

In raspberries, these types are called primocane fruiting, fall fruiting, or everbearing. 'Prime-Jim' and 'Prime-Jan' were released in 2004 by the University of Arkansas and are the first cultivars of primocane fruiting blackberry.[27] They grow much like the other erect cultivars described above, however the canes that emerge in the spring, will flower in mid-summer and fruit in late summer or fall. The fall crop has its highest quality when it ripens in cool mild climate such as in California or the Pacific Northwest.[citation needed]

'Illini Hardy' a semi-erect prickly cultivar introduced by the University of Illinois is cane hardy in zone 5, where traditionally blackberry production has been problematic, since canes often failed to survive the winter.

Blackberry production in Mexico has expanded enormously in the past decade. While once based on the cultivar 'Brazos', an old erect blackberry cultivar developed in Texas in 1959, the Mexican industry is now dominated by the Brazilian 'Tupy' released in the 1990s. 'Tupy' has the erect blackberry 'Comanche', and a "wild Uruguayan blackberry" as parents.[28] Since there are no native blackberries in Uruguay, the suspicion is that the widely grown 'Boysenberry' is the male parent. In order to produce these blackberries in regions of Mexico where there is no winter chilling to stimulate flower bud development, chemical defoliation and application of growth regulators are used to bring the plants into bloom. 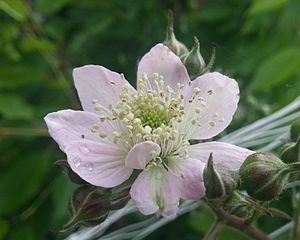 As a result of blackberries belonging to the same genus as raspberries,[29] they share the same diseases including anthracnose which can cause the berry to have uneven ripening and sap flow may also be slowed.[30][31] They also share the same remedies including the Bordeaux mixture,[32] a combination of lime, water and Copper(II) sulfate.[33] The rows between blackberry plants must be free of weeds, blackberry suckers and grasses which may lead to pests or diseases.[34] Fruit growers are selective when planting blackberry bushes as wild blackberries may be infected[34] and gardeners are recommended to purchase only certified disease-free plants.[35]

The spotted-wing drosophila, Drosophila suzukii is a serious pest of blackberries.[36] Unlike its vinegar fly relatives which are primarily attracted to rotting or fermented fruit, D. suzukii attacks fresh, ripe fruit by laying eggs under the soft skin. The larvae hatch and grow in the fruit, destroying the fruit's commercial value.[36]

Another pest is Amphorophora rubi, known as the Blackberry Aphid, which not only eats blackberries but raspberries as well.[37][38][39]

Folklore in the United Kingdom is told that blackberries should not be picked after Old Michaelmas Day (11 October) as the devil (or a Púca) has made them unfit to eat by stepping, spitting or fouling on them.[41] There is some value behind this legend as wetter and cooler weather often allows the fruit to become infected by various molds such as Botryotinia which give the fruit an unpleasant look and may be toxic.[42] According to some traditions, blackberry's deep purple color represents Christ's blood and the crown of thorns was made of brambles,[43][44] although other thorny plants, such as Crataegus (hawthorn species) and Euphorbia milii (crown of thorns plant), have been proposed as the material for the crown.[45][46]