Blackburn Cathedral, officially known as the Cathedral Church of Blackburn Saint Mary the Virgin with St Paul, is an Anglican (Church of England) cathedral situated in the heart of Blackburn town centre, in Lancashire, England. The cathedral site has been home to a church for over a thousand years and the first stone church was built there in Norman times.

With the creation of the Diocese of Blackburn in 1926 (taken from the Diocese of Manchester) the impressive parish church of St Mary the Virgin was raised to cathedral status. The church, which was built in 1826 and designed by architect John Palmer, now forms the cathedral's nave.

In the early 1930s, fundraising began to enlarge the cathedral so that the building complemented its newfound importance. By 1938, enough money had been raised and work began on enlarging the new cathedral. Although work was interrupted by the war, it was resumed afterwards and continued through the 1950s and into the early 1960s. After the death of architect W.A. Forsyth in 1950, architect Laurence King joined the project and designed the distinctive lantern tower. The lantern tower, which consists of 56 different panes of coloured glass, with a modernist slender aluminium spire, was completed in 1967.

The cathedral was finally completed in 1977 and what had been built over the past decades was finally consecrated as Blackburn Cathedral that year.[1]

The North transept contains eight misericords dating from the 15th century. It is not known at what time they arrived at the Cathedral, but they are believed to have originated at Whalley Abbey. This could mean that they were removed to a builder's yard after the Dissolution, but with the cathedral not being built until the 19th century, this allows for the possibility that they had lain unused for some 300 years.

On 17 April 2014 the Cathedral hosted the Royal Maundy service. In keeping with tradition, The Queen handed out Maundy money to 88 men and 88 women. It was the Queen's first visit to the Cathedral.[2]

The cathedral has seven choirs — Boys, Girls, Children's, Lantern Voices, YPC (Young Peoples' Choir), Men and Renaissance (Bach) Choir. On Sundays the Parish Communion is sung by the YPC and the Eucharist and Evensong by the Cathedral Choir (Boys and Men). 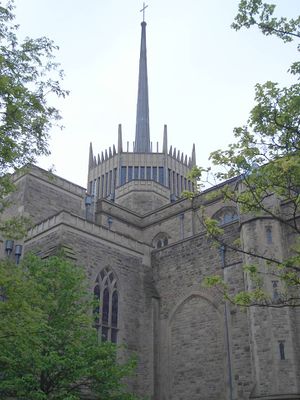 The exterior, with the distinctive aluminium spire

A scheme for an organ in the west gallery was submitted, by John Gray and partner Frederick Davison, two years before the consecration of the new church. The organ was opened on 28 February 1828 with a concert which included works by Handel - extracts from his Messiah and Israel in Egypt and his Occasional Overture played by the new organist Joseph John Harris.[8]

In 1998 the lantern tower underwent restoration, being rebuilt in natural stone. The original 1960s tower had been constructed in concrete. The windows were also replaced.

Further work was carried out in 2000–01 to re-build the east end roofs and parapets and blend them into the existing structures. Upon completion of this work the cathedral was finally deemed to be finished after over 70 years of construction.

As well as this rebuilding a new piece of art was commissioned for the exterior of the building. The sculpture by Mark Jalland, The Healing of The Nations, measuring 35 by 26 feet (10.7 m × 7.9 m), is an abstract steel and copper circular piece containing thousands of interwoven fibre optics that create ever-changing patterns of light at night. It is deemed by many to be one of the most innovative pieces of modern sculpture at any English cathedral.

The cathedral still forms an important part of the community. It is open to visitors and has a gift shop and café as well as hosting numerous events. In February 2011 the Cathedral exhibited the Quaker Tapestry from Kendal.[11]