Blackburn with Darwen is a unitary authority area in Lancashire, North West England. It consists of Blackburn, the small town of Darwen to the south of it, and the surrounding countryside.

The proportion of Muslim population (19.4% or 26,674 people) is the third highest among all local authorities in the United Kingdom and the highest outside London. 20.4% of the districts population belongs to any South Asian ethnic group, making it the highest percentage in the region, and almost four times higher than national average of South Asians.[1]

According to the 2011 census, the proportion of Muslims increased to 27%.

There is a total of 64 seats on the council with the borough is divided up into 23 wards, all with three councillors with the exception of Earcroft, Whitehall, and North Turton and Tockholes, which have 2 members, and East Rural which has one.

The council was shaken in 2004 when six Labour councillors quit the ruling group one month after an election and became independent representatives, and the council temporarily fell into no overall control.[2][3] The councillors, who eventually re-joined the party, left over an internal row reportedly sparked by the demotion of particular councillors in a post-election reshuffle.[2] Allegations of vote-rigging and corruption have dogged the council, with members of the Muslim community reportedly being "strong-armed by mosque leaders and councillors to vote Labour" during elections.[4] The possibility of corruption has been eased by reforms to postal voting which have made electoral fraud "childishly simple" in the UK according to a European watchdog.[5] The number of postal votes registered in Blackburn in 2005 was 20,000, compared to 7,600 in 2001.[4] In April 2005, local councillor Mohammed Hussain was jailed for three years for rigging the 2002 town hall election by stealing at least 230 postal vote ballots in his ward.[6]

The local elections of May 2007 saw a coalition of parties take control of the council from Labour. The small For Darwen party and independents held the fine balance of power on the council in a partnership with the Conservatives and Liberal Democrats. Like its predecessor, the ruling administration also attracted controversy; one of its councillors being suspended following a conviction for benefit fraud[7] and another following allegations of domestic abuse.[8] Tensions over the presence of former England First Party member Michael Johnson within the coalition as part of For Darwen rose to the surface when Johnson was quoted in The Sun newspaper in October 2007 blaming his unemployment on "all the immigrants flooding this country." "These people take our jobs and it will only get worse", he said.[9] Three weeks before local elections in May 2008, a Liberal Democrat candidate for Shear Brow ward caused a stir by defecting to Labour.[10]

This is a chart of trend of regional gross value added of Blackburn with Darwen at current basic prices published (pp. 240–253) by Office for National Statistics with figures in millions of British Pounds Sterling.

The authority borders with boroughs administered as within the Greater Manchester and Lancashire upper-tier local authorities: Chorley in the west and then (clockwise) South Ribble, Ribble Valley, Hyndburn and Rossendale in Lancashire; Bury and Bolton in Greater Manchester. The data below is based on June 2012. 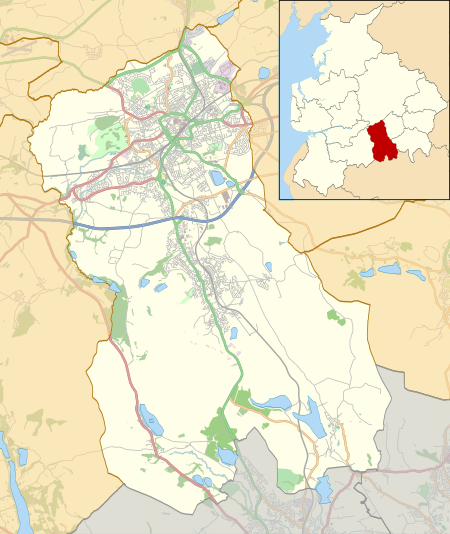 Winter Hill
Towns, suburbs, villages and hills in the Borough of Blackburn with Darwen 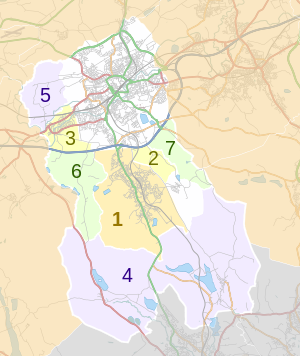 Main article: List of schools in Blackburn with Darwen

As a unitary authority, Blackburn with Darwen authority has a statutory responsibility for educational standards and schooling within its boundaries.[16]