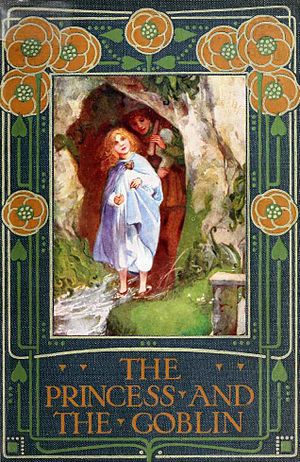 The Princess and the Goblin cover of the edition published by Blackie and Son, 1911.

Blackie and Son Limited was a publishing house in Glasgow, Scotland and in London, England, from 1890 to 1991.

The firm was founded in 1809 by John Blackie, snr. (1782-1874) as a partnership with two others and was originally known as 'Blackie, Fullarton and Company'. It began printing in 1819 and was renamed 'Blackie and Son' in 1831, becoming a public limited company in 1890. The business had quarters at: 16/18 William IV Street, Charing Cross, London; 17 Stanhope Street, Glasgow, Scotland; and 5 South College Street, Edinburgh.[1] They also opened offices in both Canada and India. The company ceased publishing in 1991.

Notable books from The Kennett Library, a graded series of classics retold for schools, include: Kidnapped, Little Women, Westward Ho!, The Black Arrow, Wuthering Heights and Ben-Hur. The firm published the many Flower Fairy books of Cicely Mary Barker beginning in 1923.

In 1902, Walter Blackie commissioned the building of a new house on a plot at Helensburgh to the West of Glasgow. At the invitation of their illustrator Talwin Morris, the architect was his friend Charles Rennie Mackintosh. This house became Hill House, regarded as one of Mackintosh's finest works.