Blackwall is an area of the East End of London in the London Borough of Tower Hamlets on the north bank of the River Thames historically part of the parish of Poplar in Middlesex, and on the corner of the peninsula, the Isle of Dogs.

While mostly residential, Blackwall Yard here provides moorings for vessels and significant roads cover the short riverside outside bend which defines the area.

The small district by Blackwall Stairs was known as Blackwall by at least the 14th century.[1] This presumably derives from the colour of the river wall, constructed in the Middle Ages. The area lay in a sheltered loop of the river next to Poplar's East Marsh, where the East India Docks were constructed at the beginning of the 19th century. The area has never had its own Anglican church so for services such as road maintenance organised by a vestry and poor relief it relied upon its ecclesiastical parish (of All Saints) Poplar.[2] Indeed the whole Isle of Dogs was until the late 20th century referred to as being Poplar or the Poplar District.[3]

The Isle excludes the symmetrical part (that is its north west forming the parish of Limehouse) and comprises:

the ancient hamlet of Poplar itself, the old shipbuilding centre of Blackwall, and the former industrial districts of Millwall and Cubitt Town. Poplar’s story is one of development and redevelopment on both the grand and the comparatively small scale, driven in the nineteenth century by mercantile interests and manufacturing, and after the Second World War by de-industrialization and the obsolescence of the Thames-side docks...

...[in recent times] a major subject is public housing, which includes the famous Lansbury Estate, built in association with the 1951 Festival of Britain.

Contrary to expectations, the River Thames landmark named Blackwall Point is not located in Blackwall district but on the northern tip of Greenwich Peninsula, which is south of the Thames. It is so named after the Blackwall Reach of the Thames.

Blackwall gives its name to the partially underlying Blackwall Tunnel, which passes south under the adjacent River Thames to North Greenwich. 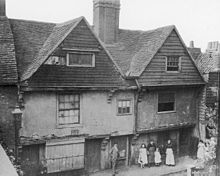 This house at Blackwall, once owned by Sir Walter Raleigh, was demolished during construction of the Blackwall Tunnel.[4]

Blackwall was a significant ocean-going port in past centuries and was connected with important voyages. On 7 June 1576, financed by the Muscovy Company, Martin Frobisher set sail from Blackwall, seeking the North West Passage.[5] Walter Raleigh had a house at Blackwall, and in the early years of the 17th century the port was the main departure point of the English colonization of North America and the West Indies launched by the London Company. 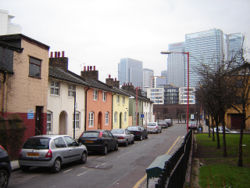 St Lawrence Cottages, a rare survivor of the old Blackwall. This shot (February 2006) faces west, and in the background is the old dock wall, beyond that the buildings around Canary Wharf.

For over four hundred years, until 1987, Blackwall was a centre of shipbuilding and repairing. This activity principally included Blackwall Yard, the Thames Ironworks and Shipbuilding Company at Leamouth, Canning Town (part of whose works spanned the vary informal border of the very small one-road, one unit deep area of Leamouth), and the Orchard House Yard. Blackwall Yard (two of whose former dry docks can still be seen around the present-day Reuters building) built the first Blackwall Frigates. Little industry remains in Blackwall today. One of the last survivors, the Pura Foods edible oil works, lying in a loop of Bow Creek at Orchard Place, closed down in 2006. This site had once been occupied by the Thames Plate Glass Works. For many years the sugar firm Fowler's, a significant maker of treacle, was in Blackwall. 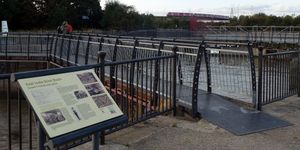 East India Dock Basin with a passing Docklands Light Railway train in the background in September 2012.

A relatively wide physical divide for a peripheral-to-Central London district separates Poplar, London from Blackwall, the A1261. The twin north-south tunnels forming the Blackwall Tunnel commence 250 metres (820 ft) north of this road, by the local borough Town Hall, within the edge of Poplar.

Blackwall and District Rowing Club was formed in 1845 and is one of the oldest rowing clubs in the United Kingdom. A Tideway rowing club, historically it was Poplar, Blackwall and District Rowing Club. It competes in leading national races, runs Poplar regatta (wind permitting), and is the end of the Great River Race. Its members hold old records in the Doggett's Coat and Badge race for single sculls on the Thames.[6] Its most notable member is Olympic gold and silver medallist, and double-World Champion Mark Hunter.

A wide range of gyms and a small leisure centre are at nearby Canary Wharf.