Bladen County was formed in 1734 as Bladen Precinct of Bath County, from New Hanover Precinct. It was named for Martin Bladen, a member of the Board of Trade.[5] With the abolition of Bath County in 1739, all of its constituent precincts became counties.

Bladen County is a member of the regional Lumber River Council of Governments. 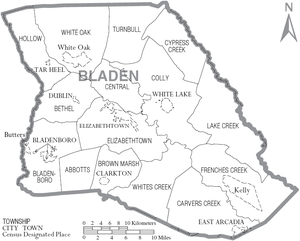