From Infogalactic: the planetary knowledge core
Jump to: navigation, search
Not to be confused with Blanche of Burgundy, Countess of Savoy.

Blanche of Burgundy (c. 1296 – c. 1326) was Queen of France and Navarre for a few months in 1322 through her marriage to King Charles IV the Fair. The daughter of Count Otto IV of Burgundy and Countess Mahaut of Artois, she was led to a disastrous marriage by her mother's ambition. Eight years before her husband's accession to the thrones, Blanche was arrested and found guilty of adultery with a Norman knight. Her sister-in-law, Margaret of Burgundy, suffered the same fate, while her sister Joan was acquitted. Blanche was imprisoned until she became queen, when she was moved to the coast of Normandy. The date and place of her death are unknown; the mere fact that she died was simply mentioned on the occasion of her husband's third marriage in April 1326. 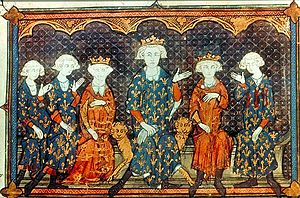 Blanche was the younger daughter of Otto IV, Count of Burgundy, and Mahaut, Countess of Artois. Her father died in 1302, leaving the county to Blanche's younger brother, Count Robert.[1] Blanche's elder sister Joan was supposed to marry King Louis the Headstrong of Navarre, the eldest son and heir apparent of King Philip the Fair of France, but Philip the Fair changed his mind and arranged for her to marry his second son, Count Philip the Tall of Poitiers, in 1307. The same year, Louis married Margaret of Burgundy.[2][3] The Countess of Artois was proud of this achievement and quickly started negotiating her younger daughter's marriage to Count Charles the Fair of la Marche, King Philip's third son, offering a huge dowry. The negotiations were successful and on 23 September 1307, the eleven-year-old Blanche and two years older Charles concluded a marriage contract.[3] The marriage ceremony was hastily performed at Countess Mahaut's castle in Hesdin in January 1308.[1] At first, the Count and Countess of la Marche had an unremarkable marriage that was neither as flawed as that of the King and Queen of Navarre nor as harmonious as that of the Count and Countess of Poitiers.[3]

In 1313, the Countess of la Marche's sister-in-law and brother-in-law, Queen Isabella and King Edward II of England, paid a visit to King Philip. Isabella presented her brothers and sisters-in-law with embroidered coin purses. Later that year, upon their return to London, Isabella and Edward held a banquet during which the Queen noticed that the coin purses she had given to Blanche and Margaret were now in the possession of the Norman knights Gautier and Philippe d'Aunay. From that she concluded that the brothers were having relationships with her sisters-in-law. When she visited Paris again in 1314, she informed King Philip about her suspicions.[4] Blanche and Margaret were soon accused of inappropriate conduct, such as drinking and eating with the knights, and of eventually committing adultery with them in Paris guard tower known as the Tour de Nesle. Blanche's sister Joan was accused of hiding the affair and later of participating in it. The accusations against Countess Blanche and Queen Margaret were more than likely true, but several 14th-century chroniclers believed that their father-in-law's popularly despised chamberlain Enguerrand de Marigny might have falsely incriminated them and the knights.[4] 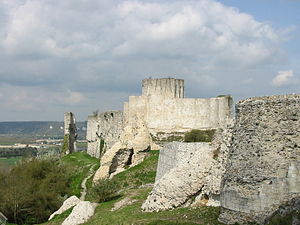 The ruins of Château Gaillard

After a certain period of time, King Philip ordered the arrest of all his daughters-in-law and the knights.[4] Following torture, the knights confessed to adultery[5] and admitted that it had lasted three years.[6] The Countess of la Marche and the Queen of Navarre were tried before the Paris Parlement and were found guilty of adultery. Their heads were shaven and both were sentenced to life imprisonment underground in Château Gaillard, while their lovers were condemned to death and duly executed.[4] Around that time, she gave birth two children: a son named Philip (shortly before 5 January 1314) and a daughter named Joan (in 1315). It is likely that her two children were born while Blanche was imprisoned, and thus their legitimacy was questioned.[1] Despite her disgrace, Blanche remained in contact with her ambitious mother and often received gifts from her.[7]

King Philip, severely shocked by the scandal, died within a year. Margaret, now queen of France, died imprisoned soon thereafter, probably murdered. Louis's reign was cut short by his sudden death. Soon, Philip the Tall and Blanche's sister Joan became king and queen of France and Navarre. It was suggested that Blanche was treated better once her sister became queen, but that was concluded from a single misinterpreted document and may not be entirely accurate.[7] Queen Joan did, however, arrange for her youngest daughter Blanche to become a nun, hoping that the seven-year-old's cloistered life would atone for her sister's transgression.[8] 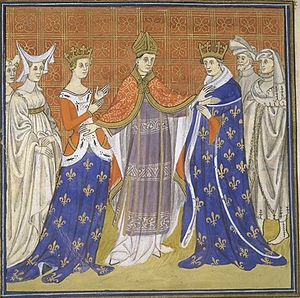 On Philip the Tall's death on 3 January 1322, Blanche's husband inherited the crowns. Blanche thus became queen of France and Navarre, but her husband still refused to release her.[9] Both of her children died in infancy, Philip before 24 March 1322 and Joan on 17 May 1321.[1] Charles requested annulment of their marriage, to which Blanche reluctantly agreed. The annulment was justified by the claim that Blanche's mother was Charles's godmother; although probably the real reason was because Blanche's pregnancy by one of her jailers.[10] Pope John XXII declared their marriage null and void on 19 May 1322,[1] and gave both Charles and Blanche permission to remarry.[7] The Countess of Artois requested, among other things, the return of her daughter's enormous dowry.[3]

Though she was replaced immediately by Marie of Luxembourg, there was no hope for Blanche to remarry, as she was sent to Gavray Castle. There is no evidence that supports the common belief that she died as a nun at Maubuisson Abbey.[7] Having spent eight years imprisoned underground, the former queen suffered from poor health.[4] The date of her eventual death is unknown; the Pope mentioned her as dead in a document of 5 April 1326 issuing a dispensation for the marriage of her former husband and Jeanne d'Évreux.[7]

Blanche is a character in Les Rois maudits (The Accursed Kings), a series of French historical novels by Maurice Druon. She was portrayed by fr (Catherine Hubeau) in the 1972 French miniseries adaptation of the series, and by Anne Malraux in the 2005 adaptation.[11][12]