Blanche of Namur, Swedish and Norwegian: Blanka (1320–1363) was queen-consort of Sweden and Norway, as the spouse of King Magnus Eriksson.

Blanche was the eldest daughter of John I, Marquis of Namur and Marie of Artois. On her father's side, she was a member of the powerful House of Dampierre, being a grandchild of Count Guy of Flanders. On her mother's side Blanche was related to the French royal house, as her mother was a daughter of Philip of Artois, a patrilineal great-grandson of Louis VIII of France, and thus a member of a junior line of the House of Capet.

It is unknown how it came that the king of Sweden and Norway married a woman from Namur. In June 1334 he travelled from Norway to Namur to propose. In Namur they got engaged and Magnus returned to Sweden in the fall of 1334. Blanche left Namur in the fall of 1335 and the wedding took place in October or early November 1335, possibly at Bohus Castle. As a wedding gift Blanche received the province of Tunsberg in Norway and Lödöse in Sweden as fiefs; Tunsberg was exchanged in 1353 to Bohus, Marstrand, Elfsyssel, Rånrike and Borgarsyssel. Blanche's coronation took place in July 1336, possibly 22 July, in the Great Church in Stockholm.[1]

They had two sons, Eric and Haakon, plus at least three daughters who died as children (some buried at Ås Abbey). It was agreed that Eric should inherit Sweden and Haakon Norway. When Haakon became Haakon VI of Norway in 1355, Eric rebelled against his father and was elevated to co-ruler of Sweden.

Her husband was accused[by whom?] of being homosexual; he had an official favorite, Bengt Algotsson, Duke of Finland – but their relationship was never confirmed as sexual.[citation needed] Blanche seems to have had a good relationship with Magnus, and exerted political influence. In 1345, her brothers Louis and Robert were made vassals of her spouse. On her seal, she is called "Queen of Sweden, Norway and Scania"; the fact that she is not wearing a veil on the seal is unusual for married women of the age.[citation needed]

Her political influence made her controversial and exposed to much criticism and slander.[citation needed] In 1359 she was accused by people[by whom?] of having poisoned her daughter-in-law, Beatrice of Bavaria, and her own son, the co-ruler, King Eric; on his deathbed, her son said, that the same person who gave him life had now taken it from him. It is possible that he himself believed that he was poisoned by her, but there is no proof that this happened.[citation needed] Historians now believe[weasel words] that both her son and her daughter-in-law died of the plague. She was disliked, as was her husband, by Saint Birgitta, who accused her of being unfaithful; Bengt Algotsson was rumored[by whom?] as the lover of both the king and the queen. 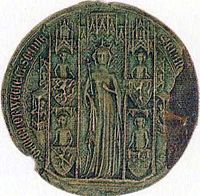 The seal of Blanche of Namur as Queen 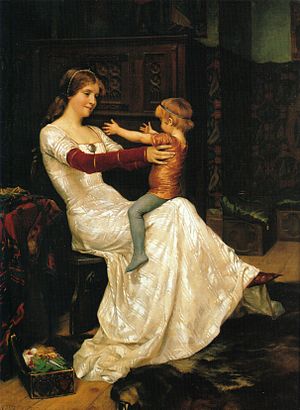 She spent her last years, from 1359 until her death, at the Tønsberg Castle in Norway, and ruled the south-east of this country. It seems she spent her last years in economic difficulties. On 9 April 1363, her son Haakon married Margaret, daughter of Valdemar IV of Denmark. Shortly after the wedding, Blanche fell ill and died. The cause of death and the place where she is buried is unknown.[2]

Queen Blanche is one of the most well-known of the Swedish/Norwegian medieval queens. Apparently, she was very politically and socially active and noticeable, not only as a queen, as many stories and songs were written about her.

In Sweden, Queen Blanche is also remembered for the song: "Rida rida ranka, hästen heter Blanka" ("Ride, ride on my knee, the horse is called Blanka"), which has influenced the famous historical painting by Albert Edelfelt of her and her son Haakon.