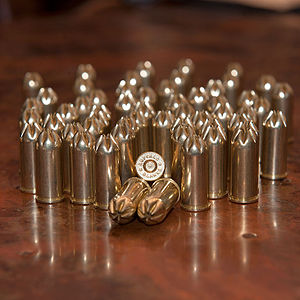 A blank is a type of cartridge for a firearm that contains gunpowder but no bullet or shot. Blanks use paper or plastic wadding to seal gunpowder into the cartridge. When fired, the blank makes a flash and an explosive sound (report), the wadding is propelled from the barrel of the gun, and the firearm's action cycles. Blanks are often used for simulation (such as in historical reenactments, theatre and movie special effects), training, for signaling (see starting pistol), and cowboy mounted shooting. Blank cartridges differ from dummy cartridges, which are used for training or function testing firearms; these contain no primer or gunpowder, and are inert.

Specialized blank cartridges are also used for their propellant force in fields as varied as construction, shooting sports, and fishing and general fun. 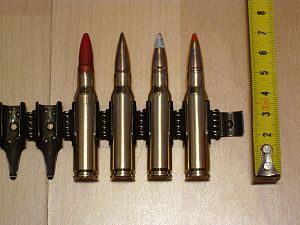 Swedish 7.62 with the blank to the left (followed by FMJ, tracer and AP) with the wooden plug clearly visible

Blanks are commonly used when the sound and flash of gunfire is needed, but a projectile would not be safe, such as in military training maneuvers or funeral honors, in movies that require gun fights, in starter pistols to signal the beginning of races and in the equestrian sport of cowboy mounted shooting.

For military applications, blanks are typically used with a special blank-firing adaptor in the firearm that constricts the barrel, keeping chamber pressures from the blank high enough and for long enough of a duration to cycle the firearm's action. In the case of non-crimped blanks, it also serves to pulverise the plug to prevent it leaving as a projectile.

For movie use, specially designed blank-firing firearms are often used, which increases the margin of safety as they cannot be loaded with live ammunition. 5-in-1 blanks are specifically made for theatrical use and are commonly used in real firearms for dramatic effect. 5-in-1 blanks can function in a variety of different calibers, hence the name. 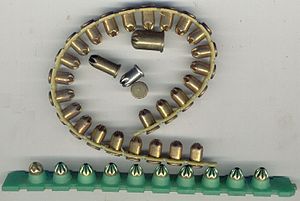 Blank rimfire cartridges, commonly called power loads, are also used in some nail guns (powder-actuated tools), where the power is tapped to force a heavy piston into the nail, with enough force to bury its full length in steel or concrete.

Some forms of fast draw competitions use special blanks that are loaded with a layer of slow burning rifle powder on top of a thin layer of faster-burning pistol powder. The pistol powder ignites the slower burning rifle powder, and fires it out the barrel much like a shotgun shell. The burning powder only travels a few yards before it completely combusts, but that is far enough to burst the balloon used as a target for those competitions. Wax bullets are also commonly used for competitions and training where a non-lethal projectile is required.

A blank cartridge may also be issued to a randomly selected shooter in an execution by firing squad, on the theory that each of the shooters may take comfort in the fact that they may not have fired a live round. This tradition dates back to before cartridge arms, when a muzzle loading musket would be loaded without a ball.[1][2][3]

The appearance of a blank cartridge can give a false sense of safety. Although blank cartridges do not contain a bullet, precautions are still required because fatalities and severe injuries have resulted on occasions when blank cartridges have been fired at very close ranges.

Blank cartridges frequently contain a paper, wood or plastic plug called a wad which seals the powder in the case. This wad can cause severe penetrating wounds at close range and bruising at medium ranges. There is also "muzzle blast" - a cloud of hot, expanding gas expelled at extremely high velocity from the muzzle of the firearm. This high velocity gas can inflict severe injury (see powerhead for an example) at close ranges. Additionally, if there is any small debris lodged inside the barrel it will be expelled at a velocity similar to that of a bullet, with the ability to inflict a severe or lethal wound. Additionally, the extremely loud noise of blanks being fired can damage the hearing of people in the immediate area.

Note that cartridges loaded with wadcutter target bullets and cartridges for the 7.62×38mmR Nagant M1895 revolver can be mistaken for blanks because the bullet does not protrude past the mouth of the cartridge casing. Shotshell cartridges known as "snake shot" or "rat-shot" used in rifles or handguns for pest control often have the shot charge sealed with cardboard or plastic wads or the ends may be crimped or folded in a manner similar to that of blank cartridges.

Actors in particular are at serious risk of injury from blank cartridges used on movie sets. Several actors have been killed in such mishaps: