Blas de Lezo y Olavarrieta (3 February 1689 – 7 September 1741) was a Spanish admiral best remembered for the Battle of Cartagena de Indias (1741) in modern-day Colombia, where the Spaniards resisted a siege by a combined British force under the command of Admiral Vernon.

Although it has been repeatedly stated that in his lifetime he was known as "Patapalo" (Pegleg) and later as "Mediohombre" (Half-man), for the many wounds suffered in his long military career, there is no historical evidence for either assertion. He appears as "Admiral One-Leg" in James Michener's 1989 novel Caribbean, while there is no mention of him as "medio hombre" until the publication of the school textbook Historia de Colombia para la Enseñanza Secundaria, by Jesús María Henao and Gerardo Arrubla, whose third edition was published in Bogotá in 1920: "el famoso General de los galeones don Blas de Lezo, marino vascongado, quien en combates anteriores, en Málaga, Tolón y Barcelona había perdido la pierna izquierda, el ojo izquierdo y el brazo derecho; este medio hombre contribuyó poderosamente al triunfo que obtuvieron las armas castellanas".[1] 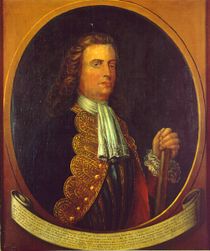 Spanish Admiral Don Blas de Lezo, with only one eye, one leg and one hand. Defended the city of Cartagena against Admiral Vernon in 1741

Born in Pasajes, in the Basque Province of Guipúzcoa in Spain, Blas de Lezo y Olavarrieta commenced his naval career in the French navy in 1701 as a midshipman. In 1704 he fought in the War of Spanish Succession as a crew member in the Franco-Spanish fleet which fought the combined forces of Great Britain and the Netherlands at the indecisive Battle of Vélez Málaga. There Lezo lost his left leg. He received a cannon-shot and he had his leg amputated under the knee.[2] Promoted to ensign, he was present at the relief of Peñíscola, Spain, and Palermo in Sicily; his service in these and other actions resulted in his promotion to ship's lieutenant. The defence of Toulon cost him his left eye. In 1711 he served in the Navy under the orders of Andrés de Pez. In 1713 he was promoted to captain. In 1714 he lost his right arm in the Siege of Barcelona. Later in this campaign, at the head of one frigate, he captured the 70-gun Stanhope commanded by John Combs.

File:LaFragataDeBlasDeLezoRemolcandoAlStanhopeHaci1710.jpg
A 19th-century depiction of Blas de Lezo's frigate towing its prize, the Stanhope, a 70-gun ship commanded by John Combs, that overcome by three times the firepower of the Lezo's frigate (1710).

Lezo served in the Pacific in 1720-1728. Although it has been claimed that he took many prizes during this period, documentary evidence indicates that in fact he took only two French frigates and not in the Pacific but in the Atlantic. He reached Callao with them in January 1720 although he had left Spain in 1716 as second-in-command of the Nuestra Señora del Carmen or Lanfranco as part of the expedition commanded by Juan Nicolás de Martinet. He was separated from the expedition while attempting to sail past Cape Horn. The prizes attributed to Lezo were taken by Martinet, who reached Callao in June 1717 and left the Pacific in 1719 before Lezo's arrival.[3]

In 1730 he returned to Spain and was promoted to chief of the Mediterranean Fleet; with this force he went to the Republic of Genoa to enforce the payment of two million pesos owed to Spain that had been retained in the Bank of San Jorge. Deeming the honour of the Spanish flag to be at stake, Blas de Lezo threatened the city with bombardment.

In 1732, on board the Santiago, he and José Carrillo de Albornoz commanded the enormous expedition to Oran and Mers-el-Kébir with more than 300 ships and around 28,000 troops, comprising infantry, cavalry and artillery. In the Battle of Aïn-el-Turk they recaptured the cities lost to the Ottoman Empire in 1708. After the defeat, Bey Abu l-Hasan Ali I managed to reunite his troops and surrounded the city of Oran. Lezo returned to its aid with six ships and 5,000 men and managed to drive off the Algerian pirate after a hard fight. Dissatisfied with this he took his 60-gun flagship into the corsair's refuge of Mostaganem Bay, a bastion defended by two forts and 4,000 Moors. He inflicted heavy damage on the forts and town. In the following months he established a naval blockade, preventing the Algerians from receiving reinforcements from Istanbul, thereby gaining valuable time for the securing of Oran's defense, until an epidemic forced him to return to Cadiz.

In 1734 the king promoted him to Lieutenant General of the Navy. He returned to South America with the ships Fuerte and Conquistador in 1737 as General Commander of Cartagena de Indias, in modern-day Colombia. There, outnumbered Spanish forces deployed in a succession of extremely strong fortifications managed to thwart the British admiral Edward Vernon's attempt to conquer Cartagena de Indias (1741). The operation lasted sixty-seven days until the British forces decided to withdraw and abandon the siege.

In 1737 Lezo was appointed commander of the fleet at Cartagena de Indias. He took up his new post just prior to the conflict between Great Britain and Spain that would become known as the War of Jenkins' Ear and that would later be subsumed into the War of Austrian Succession.

The conflict took its name from an incident which took place seven years before the outbreak of hostilities. In 1731, the British smuggler brig Rebecca was boarded by the Spanish patrol boat La Isabela, commanded by Juan de León Fandiño. After boarding, Fandiño allegedly cut off the left ear of the Rebecca's captain, Robert Jenkins, whom he accused of smuggling. Fandiño reportedly told Jenkins, "Go, and tell your King that I will do the same, if he dares to do the same." In March 1738, Jenkins was asked to testify before Parliament, presumably to repeat his story before a committee of the House of Commons. There is no evidence that he did.[4] The incident was considered alongside over 100 cases of "Spanish Depredations upon British Subjects",[5]

In the early stages of the conflict, the British Admiral Edward Vernon undertook attacks on various Spanish outposts in America. One early victory involved the conquest of Portobelo (Panama).

Admiral Vernon approached Cartagena de Indias on three separate occasions. Both Vernon and Edward Trelawny, British governor of Jamaica, considered the Spanish gold shipping port to be a prime objective. The first attempt, in March 1740, was essentially a reconnaissance in force by a squadron including ships of the line, two fire ships, three bomb vessels, and transport ships. Vernon's intention was to gather information on topography and troop strength and to provoke a response that might give him a better idea of the defensive capabilities of the Spanish. Lezo countered by moving gun emplacements and concentrating his limited forces to mask the true disposition of his defencss, and to thwart Vernon's attempt at an amphibious assault. In the face of strong resistance, Vernon's attempt to land 400 soldiers was unsuccessful. The British then undertook a three-day naval bombardment of the city, and withdrew.

In May, Vernon returned to Cartagena de Indias in charge of 13 warships, with the intention of bombarding the city. Lezo reacted by deploying his six ships of the line so that the British fleet was forced into ranges where they could only make short or long shots that were of little value. Vernon subsequently withdrew.

The third attack on Cartagena de Indias took place March 13 - May 20, 1741, and was the largest action of the war. The British concentrated a large fleet consisting of 124 ships, including 2,620 artillery pieces and more than 27,000 men. Of that number, 10,000 were soldiers responsible for initiating a ground assault. There were also 12,600 sailors, 1,000 Jamaican slaves and macheteros, and 4000 recruits from Virginia led by Lawrence Washington (1718-1752), the elder half-brother of George Washington, future President of the United States. The defences of Cartagena de Indias comprised 3,000 soldiers between regular troops, Black & Afro-descendants militia,[6] 600 Indian archers, plus the crews and troops of six Spanish warships. Blas de Lezo's advantages consisted of a formidable primary fortress and numerous secondary fortifications.

On the evening of April 19, the British mounted an assault in force upon San Felipe. Three columns of grenadiers supported by Jamaicans and several British companies moved under cover of darkness, with the aid of an intense naval bombardment. The British fought their way to the base of the fort's ramparts where they discovered that the Spanish had dug deep trenches at the foot of the defensive walls. This effectively rendered the British scaling equipment too short for the task. This stymied the British advance, since the fort's walls had not been breached, and the ramparts could not be topped. Neither could the British easily withdraw, in the face of intense Spanish fire and under the weight of their own equipment. The Spanish seized on this opportunity, with devastating effect. Reversing the tide of battle, the Spanish initiated a fixed bayonet charge at first light, inflicting heavy casualties upon the British. The surviving British forces retreated to the safety of their ships. The British maintained a naval bombardment, sinking what remained of the small Spanish squadron (after Lezo's decision to scuttle some of his ships in an effort to block the harbor entrance). Nonetheless, the Spanish managed to thwart any attempt by the British to land another ground assault force. With supplies running low, and with the outbreak of disease (primarily yellow fever) that took the lives of many of those confined to the crowded ships, Vernon decided to raise the siege on May 9 and return to Jamaica. Six thousand British died. Spanish casualties are listed as just under one thousand dead.

Lezo died four months after the siege was raised and a contemporary source indicates that the cause of death was epidemic typhus: "unas calenturas, que en breves días se le declaró tabardillo".[7] The site of his grave is unknown.[8]

Blas de Lezo was blamed for not having used his naval forces to full effect and for having sunk his own ships to no gain and at an immense cost to the Crown. He was later honoured for his part in the siege of Cartagena de Indias as a square and an avenue in the city of Cartagena are named after him. A modern statue stands in front of the Castillo San Felipe de Barajas. In 2011, during a conference on Blas de Lezo's place in history and honouring the 270th anniversary of Cartagena de Indias' defence, a plaque was placed on the wall at the Plaza de los Coches, by the Clock Tower portal.[9][10] And in November 2014, a 35,000 kilo statue of Lezo was erected in Madrid's Plaza Colón.[11]

Several Spanish warships have been named Blas de Lezo in his honour including:

In 2005 a novel with the title El día que España derrotó a Inglaterra ("The day Spain defeated England"),[13] about the siege of Cartagena de Indias written by the Colombian senator Pablo Victoria, proved to be a publishing success in Spain.

Other publications about the historical figure followed, including:

The Spanish naval historian Hugo O’Donnell y Duque de Estrada has commented on the image that has been created of Blas de Lezo and expressed his concern over grossly exaggerated claims about Cartagena being England’s “greatest naval defeat” and that thanks to Lezo “Spanish is still spoken in America”.[14]

Similarly, the curators of the Blas de Lezo exhibition at Madrid's Naval Museum, Mariela Beltrán and Carolina Aguado, have called for the need to revise many of the statements made on the subject and repeated over the Internet and other media.[15]

Meanwhile, Francisco Hernando Muñoz Atuesta, compiler of Diarios de ofensa y defensa, has shown that it has "traditionally been stated that the English King forbade any writing on the failure of his armed forces at Cartagena de Indias, which is absolutely false. What really happened was that the British Prime Minister Sir Robert Walpole, to suit his own political purposes, tried to prevent the defeat becoming widely known, and achieved this at the time."[16]