From Infogalactic: the planetary knowledge core
Jump to: navigation, search
For other uses, see Blasphemy (disambiguation). 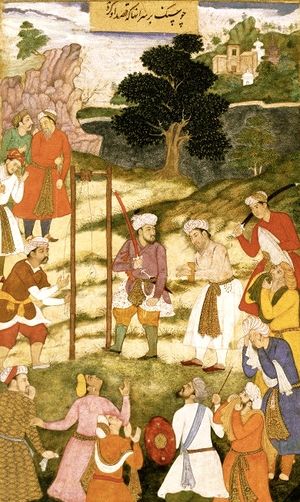 Blasphemy is the act of insulting or showing contempt or lack of reverence for (a) God(s), to religious or holy persons or sacred things, or toward something considered sacred or inviolable.[2][3][4][5]

Some religions consider blasphemy as a religious crime.[6] As of 2012, anti-blasphemy laws existed in 32 countries, while 87 nations had hate speech laws that covered defamation of religion and public expression of hate against a religious group.[7] Anti-blasphemy laws are particularly common in Muslim-majority nations, such as those in the Middle East and North Africa,[7] although they are also present in some Asian and European countries. 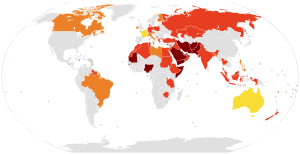 In some countries with a state religion blasphemy is outlawed under the criminal code. Such laws have led to the persecution, lynchings, murder or arrest of minorities and dissident members, after flimsy accusations.[10][11]

As of 2012, 33 countries had some form of anti-blasphemy laws in their legal code.[7] Of these, 20 were Muslim-majority nations – Afghanistan, Algeria, Bahrain, Egypt, Indonesia, Iran, Jordan, Kuwait, Malaysia, the Maldives, Morocco, Oman, Pakistan, Qatar, Saudi Arabia, Somalia, Sudan, Turkey, the UAE and the Western Sahara. The other twelve nations with anti-blasphemy laws in 2012 were Denmark, Finland, Germany, Greece, India, Ireland, Italy, Lebanon, Malta, the Netherlands (abolished in 2014), Nigeria, Poland and Singapore.[7] Blasphemy was treated as a capital crime (death penalty) in many Muslim nations.[6]

Other countries have removed the ban of blasphemy. France did so in 1881 to allow freedom of religion and freedom of the press and blasphemy was abolished or repealed in Sweden in 1970, Norway with Acts in 2009 and 2015, the Netherlands in 2014, and Iceland in 2015.

Where blasphemy is banned, it can be either some laws which directly punish religious blasphemy,[12] or some laws that allow those who are offended by blasphemy to punish blasphemers. Those laws may condone penalties or retaliation for blasphemy under the labels of blasphemous libel,[13] expression of opposition, or "vilification," of religion or of some religious practices,[14][15] religious insult,[16] or hate speech.[17]

Christian theology condemns blasphemy. It is spoken of in Mark 3:29, where blaspheming the Holy Spirit is spoken of as unforgivable—the eternal sin. However, there is dispute over what form this blasphemy may take and whether it qualifies as blasphemy in the conventional sense; and over the meaning of "unforgivable". In 2 Kings 18, the Rabshakeh gave the word from the king of Assyria,[clarification needed] dissuading trust in the Lord, asserting that God is no more able to deliver than all the gods of the land.

In Matthew 9:2-3, Jesus told a paralytic "your sins are forgiven" and was accused of blasphemy.

Blasphemy has been condemned as a serious, or even the most serious, sin by the major creeds and Church theologians (apostasy and infidelity [unbelief] were generally considered to be the gravest sins, with heresy a greater sin than blasphemy, cf. Thomas Aquinas' Summa Theologiae).[18]

Catholic prayers and reparations for blasphemy

In the Catholic Church, there are specific prayers and devotions as Acts of Reparation for blasphemy.[25] For instance, The Golden Arrow Holy Face Devotion (Prayer) first introduced by Sister Marie of St Peter in 1844 is recited "in a spirit of reparation for blasphemy". This devotion (started by Sister Marie and then promoted by the Venerable Leo Dupont) was approved by Pope Leo XIII in 1885.[26] The Raccolta Catholic prayer book includes a number of such prayers.[27] The Five First Saturdays devotions are done with the intention in the heart of making reparation to the Blessed Mother for blasphemies against her, her name and her holy initiatives.

The most common punishment for blasphemers was capital punishment through hanging or stoning, justified by the words of Leviticus 24:13-16.

Then the Lord spoke to Moses, saying, “Bring out of the camp the one who cursed, and let all who heard him lay their hands on his head, and let all the congregation stone him. And speak to the people of Israel, saying, Whoever curses his God shall bear his sin. Whoever blasphemes the name of the Lord shall surely be put to death. All the congregation shall stone him. The sojourner as well as the native, when he blasphemes the Name, shall be put to death."

The last person hanged for blasphemy in Great Britain was Thomas Aikenhead aged 20, in Scotland in 1697. He was prosecuted for denying the veracity of the Old Testament and the legitimacy of Christ's miracles.[29] 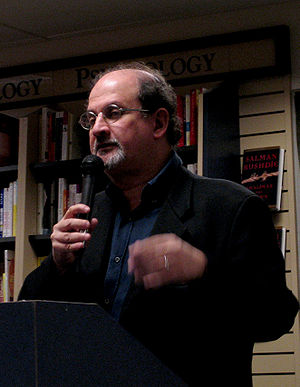 Writer Salman Rushdie was accused of blasphemy and subject of a fatwā issued by Ayatollah Ruhollah Khomeini, the Supreme Leader of Iran, in February 1989.
Main article: Islam and blasphemy

In Islamic literature, blasphemy is of many types, and there are many different words for it: sabb (insult) and shatm (abuse, vilification), takdhib or tajdif (denial), iftira (concoction), la`n or la'ana (curse) and ta`n (accuse, defame).[30] In Islamic literature, the term blasphemy sometimes also overlaps with infidel (kufr, disbeliever), fisq (depravity), isa'ah (insult), and ridda (apostasy).[31][32] There are a number of surah in Qur'an and sunnah in hadith relating to blasphemy, from which Quranic verses 5:33-34 and 33:57-61 have been most commonly used in Islamic history to justify and punish blasphemers.[33] For example,[33]

The only punishment of those who wage war against Allah and His Messenger and strive to make mischief in the land is that they should be murdered, or crucified, or their hands and their feet should be cut off on opposite sides, or they should be imprisoned. This shall he a disgrace for them in this world, and in the Hereafter they shall have a grievous chastisement. Except those who repent before you overpower them; so know that Allah is Forgiving, Merciful.

Those who annoy Allah and His Messenger - Allah has cursed them in this World and in the Hereafter, and has prepared for them a humiliating Punishment. Truly, if the Hypocrites, and those in whose hearts is a disease, and those who stir up sedition in the City, desist not, We shall certainly stir thee up against them: Then will they not be able to stay in it as thy neighbours for any length of time: They shall have a curse on them: whenever they are found, they shall be seized and slain (without mercy).

A variety of actions, speeches or behavior can constitute blasphemy in Islam. Some examples include insulting or cursing Allah, or Muhammad; mockery or disagreeable behavior towards beliefs and customs common in Islam; criticism of Islam's holy personages. Apostasy, that is act of abandoning Islam, or finding faults or expressing doubts about Allah (ta'til) and Qur'an, rejection of Muhammed or any of his teachings, or leaving the Muslim community to become an atheist is a form of blasphemy. Questioning religious opinions (fatwa) and normative Islamic views can also be construed as blasphemous. Improper dress, drawing offensive cartoons, tearing or burning holy literature of Islam, creating or using music or painting or video or novels to mock or criticize Muhammad are some examples of blasphemous acts.[34][35][36][37] In the context of those who are non-Muslims, the concept of blasphemy includes all aspects of infidelity (kufr).

The Quran does not explicitly mention any worldly punishment for blasphemy (sabb allah or sabb al-rasul), as it does for apostasy (riddah). Islamic jurisprudence (fiqh) of Sunni and Shia madhabs have declared different punishments for the religious crime of blasphemy, and they vary between schools. These are as follows:[38][39][40]

Some jurists suggest that the sunnah in hadith[52] provide a basis for a death sentence for the crime of blasphemy, even if someone claims not to be an apostate, but has committed the crime of blasphemy. Some[53][54] modern Muslim scholars contest that Islam supports blasphemy law, stating that Muslim jurists made the offense part of Sharia.

In Islamic jurisprudence, Kitab al Hudud and Taz'ir cover punishment for blasphemous acts.[57][58] The penalties for blasphemy can include fines, imprisonment, flogging, amputation, hanging, or beheading.[59] Many nations prescribe and carry out the death penalty for apostasy, a similarly motivated action, and Pakistan and Egypt demand execution for some blasphemers. Muslim clerics may call for revenge against an alleged blasphemer by issuing a fatwa (legal ruling), or simply provide guidelines on behaviors and lifestyle that is blasphemous. For example, in Malaysia, Islamic scholars issued a fatwa declaring yoga as blasphemous, because yoga is a form of spiritual practice in Hinduism.[60][61][62]

Notable cases and debate on blasphemy

One famous case of the Islamic blasphemy law was the fatwa against English author Salman Rushdie for his book entitled The Satanic Verses, the title of which refers to an account that Muhammad, in the course of revealing the Quran, received a revelation from Satan and incorporated it therein until made by Allah to retract it (see Satanic verses). Several translators of his book into foreign languages have been murdered.[63]

As of 2011, all Islamic majority nations, worldwide, had criminal laws on blasphemy. Over 125 non-Muslim nations worldwide did not have any laws relating to blasphemy.[64][65] In Islamic nations, thousands of individuals have been arrested and punished for blasphemy of Islam.[66][67] Several Islamic nations have argued in the United Nations that blasphemy against Muhammad is unacceptable, and laws should be passed worldwide to place "limits on the freedom of expression." Non-Muslim nations that do not have blasphemy laws, have pointed to abuses of blasphemy laws in Islamic nations, and have disagreed.[68][69][70]

See also: List of capital crimes in the Torah

Leviticus 24:16 states that he that blasphemes the name of the LORD "shall surely be put to death". In Jewish law the only form of blasphemy which is punishable by death is blaspheming the Ineffable Name.[71]

The Seven Laws of Noah, which Judaism sees as applicable to all people, prohibit blasphemy.[72]

In the early 21st century, blasphemy became an issue in the United Nations. The United Nations passed several resolutions which called upon the world to take action against the "defamation of religions".[73]

The campaign for worldwide criminal penalties for the "defamation of religions" had been spearheaded by Organisation of Islamic Cooperation on behalf of the United Nations' large Muslim bloc. The campaign ended in 2011 when the proposal was withdrawn in Geneva, in the Human Rights Council because of lack of support, marking an end to the effort to impose worldwide blasphemy strictures along the lines of those in Pakistan, Saudi Arabia, and Iran. This resolution had passed every year since 1999, in the United Nations, with declining number of "yes" votes with each successive year.[74]

Prohibitions of displays of lack of respect for a religion or other belief system, including blasphemy laws, are incompatible with the Covenant, except in the specific circumstances envisaged in article 20, paragraph 2, of the Covenant. Such prohibitions must also comply with the strict requirements of article 19, paragraph 3, as well as such articles as 2, 5, 17, 18 and 26. Thus, for instance, it would be impermissible for any such laws to discriminate in favor of or against one or certain religions or belief systems, or their adherents over another, or religious believers over non-believers. Nor would it be permissible for such prohibitions to be used to prevent or punish criticism of religious leaders or commentary on religious doctrine and tenets of faith.

In contemporary language, the notion of blasphemy is often used hyperbolically. This usage has garnered some interest among linguists recently, and the word 'blasphemy' is a common case used for illustrative purposes.[76]