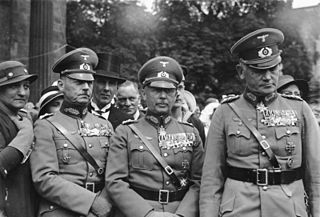 The Blomberg–Fritsch Affair, also known as the Blomberg–Fritsch crisis (German: Blomberg–Fritsch–Krise), was two related scandals in early 1938 which resulted in the subjugation of the German Armed Forces (Wehrmacht) to dictator Adolf Hitler. As documented in the Hossbach Memorandum, Hitler had been dissatisfied with the two high-ranking military officials concerned, Werner von Blomberg and Werner von Fritsch, and regarded them as too hesitant towards the war preparations he was demanding. Hitler took further advantage of the situation by replacing several generals and ministers with men more loyal to him.

Hitler took personal command of the armed forces through the new Oberkommando der Wehrmacht (OKW) after the defeat outside Moscow in December 1941 and appointed himself as commander of the Oberkommando des Heeres (OKH) after Walther von Brauchitsch was relieved and transferred to the leadership reserve (Führerreserve). Hitler then began participating at OKW, where field marshal Wilhelm Keitel never dared to oppose him.

The Blomberg–Fritsch affair began soon after the marriage on 12 January 1938 of the War Minister Werner von Blomberg to Erna Gruhn, when the Berlin police discovered she had a long criminal record and had posed for pornographic photographs. According to testimony given much later at the Nuremberg trials, information received by the Police Commissioner within days also indicated that "Marshal von Blomberg's wife had been a previously convicted prostitute who had been registered as a prostitute in the files of seven large German cities; she was in the Berlin criminal files... She had also been sentenced by the Berlin courts for distributing indecent pictures."[1] Marriage to a person with such a criminal record violated the standard of conduct expected of officers as defined by Blomberg himself and came as a shock to Hitler — the Luftwaffe chief Hermann Göring had been Blomberg's best man, and Hitler himself had served as a witness at the wedding. Hitler and Göring saw this development as an opportunity to dispose of Blomberg.[2] Hitler ordered Blomberg to have the marriage annulled in order to avoid a scandal and to preserve the integrity of the army. Blomberg refused to annul the marriage but, after Göring threatened to make his wife's past public knowledge, on 27 January 1938 he resigned from his posts.

The events surrounding Blomberg's marriage inspired Hermann Göring and Heinrich Himmler to arrange a similar affair for Commander-in-Chief Werner von Fritsch. Göring did not want Fritsch to become the successor to Blomberg and thus his superior. Himmler wanted to weaken the Wehrmacht and its mainly aristocratic generals in order to strengthen his Schutzstaffel as a competitor to the regular German Army (Heer). In 1936, Reinhard Heydrich had prepared a file on Fritsch with allegations of homosexuality and had passed the information on to Hitler, but Hitler had rejected it and ordered Heydrich to destroy the file. However, he did not do so.[3] Now in 1938, Heydrich resurrected the old file on Fritsch, who was again accused of being a homosexual by Himmler and his SS.[4] It was reported that Fritsch had been encouraged by general Ludwig Beck to carry out a military putsch against the Hitler regime, but that he declined and resigned on 4 February 1938, to be replaced by Walther von Brauchitsch, whom Fritsch had recommended for the post.[5]

Hitler used the situation to transfer the duties of the Ministry of War (Reichskriegsministerium) to a new organisation—the Supreme Command of the Armed Forces (Oberkommando der Wehrmacht, or OKW)—and Wilhelm Keitel, who became the new head of the OKW on 4 February 1938.[6] This weakened the traditional Army High Command (Oberkommando des Heeres, or OKH) which was now subordinated to the OKW.

Hitler took further advantage of the situation by replacing several generals and ministers with men even more loyal to him, taking more effective de facto control of the Wehrmacht, which de jure he commanded. Some senior officers of the Wehrmacht protested against these changes, most notably Colonel General Ludwig Beck, who circulated a petition signed by Colonel General Gerd von Rundstedt and others.[citation needed]

Soon it became known that the charges against Fritsch were false — the information in the file was in fact about a Rittmeister (cavalry captain) called Achim von Frisch. Himmler and Heydrich nevertheless pursued the case, conveniently discovering an individual called Hans Schmidt to serve as a witness in support of the charge. The Wehrmacht demanded that an honour court of officers examine the Blomberg–Fritsch Affair, as it had come to be known. The proceedings were presided over by Hermann Göring. Schmidt claimed to recognise Fritsch as an officer whom he had witnessed in a homosexual act in a public lavatory with a man known (in translation) as "Bavarian Joe".[7] However, Schmidt was exposed as a notorious criminal whose Berlin gang had specialized in the blackmail of homosexuals.[8]

Members of the German officer corps were appalled at the mistreatment of Fritsch and, in the next meeting, Himmler, Göring, and even Hitler might have come under pressure from them as the case against Fritsch was seen as weak.[9] The successful annexation (Anschluss) of Austria shortly thereafter silenced those critics. Colonel General Beck resigned on 18 August 1938 and Colonel General von Rundstedt obtained permission to retire in October 1938.

Schmidt later withdrew his accusation against Fritsch, and was subsequently murdered. Fritsch was formally acquitted on 18 March, but the damage to his name was done, and he was never reinstated as Commander-in-Chief. Despite the army demanding his rehabilitation and restoration to his former command, Hitler would only go so far as to name him honorary colonel of an artillery regiment. Just after the German invasion of Poland, Fritsch was inspecting front line troops when he was shot in the leg and died. Some people believed that he had been seeking his own death.

Bound by their personal oath to Hitler (the Reichswehreid of 1934, ironically ordered by Blomberg), many members of the Wehrmacht never acted on their feelings of displeasure regarding this event. Thereafter, the army was more or less a reliable instrument for Hitler.