From Infogalactic: the planetary knowledge core
Jump to: navigation, search
For the Ben Kiernan book, see Blood and Soil (book).

Logo of the Ministry of Food and Agriculture (de), and of the Blood and Soil ideology

Blood and Soil (German: Blut und Boden) refers to an ideology that focuses on ethnicity based on two factors, descent blood (of a folk) and territory. It celebrates the relationship of a people to the land they occupy and cultivate, and it places a high value on the virtues of rural living.

The German expression was coined in the late 19th century, in tracts espousing racialism and national romanticism. It produced a regionalist literature, with some social criticism.[1] This romantic attachment was widespread prior to the rise of the Nazis.[2] Major figures in 19th-century German agrarian romanticism included Ernst Moritz Arndt and Wilhelm Heinrich Riehl, who argued that the peasantry represented the foundation of the German people and conservatism.[3]

Ultranationalists predating the Nazis often supported country living as more healthy, with the Artaman League sending urban children to the countryside to work in part in hopes of transforming them into Wehrbauern.[4]

Richard Walther Darré popularized the phrase at the time of the rise of Nazi Germany; he wrote a book called Neuadel aus Blut und Boden (A New Nobility Based On Blood And Soil) in 1930, which proposed a systemic eugenics program, arguing for breeding as a cure-all for all the problems plaguing the state.[5] Darré was an influential member of the Nazi party and a noted race theorist who assisted the party greatly in gaining support among common Germans outside the cities. Prior to their ascension to power, Nazis called for a return from the cities to the countryside.[6] This agrarian sentiment allowed opposition to both the middle class and the aristocracy, and presented the farmer as a superior figure beside the moral swamp of the city.[7] 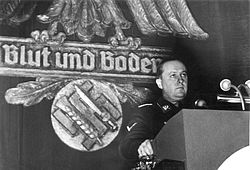 The doctrine not only called for a "back to the land" approach and re-adoption of rural values; it held that German land was bound, perhaps mystically, to German blood.[8] Peasants were the Nazi cultural heroes, who held charge of German racial stock and German history—as when a memorial of a medieval peasant uprising was the occasion for a speech by Darré praising them as force and purifier of German history.[9] This would also lead them to understand the natural order better, and in the end, only the man who worked the land really possessed it.[10] Urban culture was decried as a weakness, "asphalt culture", that only the Führer's will could eliminate—sometimes as a code for Jewish influence.[11]

It contributed to the Nazi ideal of a woman: a sturdy peasant, who worked the land and bore strong children, contributing to praise for athletic women tanned by outdoor work.[12] That country women gave birth to more children than city ones also was a factor in the support.[13]

Carl Schmitt argued that a people would develop laws appropriate to its "blood and soil" because authenticity required loyalty to the Volk over abstract universals.[14]

Neues Volk displayed demographic charts to deplore the destruction of the generous Aryan families' farmland and how the Jews were eradicating traditional German peasantry.[15] Posters for schools depicted and deplored the flight of people from the countryside to the city.[16] The German National Catechism, a pamphlet widely used in schools, also recounted how farmers lost ancestral lands and had to move to the city, with all its demoralizing effects:[17]

How has the Jew subjugated the peoples?

With money. He lent them money and made them pay interest. Thousands and thousands of Germans have been made wretched by the Jews and been reduced to poverty. Farmers whose land had been in the family for more than 100 years were driven from their land because they could not pay the interest.

What happened to those farmers?

They had to move to the cities. Torn from the land to which they belonged, robbed of their labour that gave their lives purpose and meaning, they fell victim to poverty and misery. Worn down, their souls crushed, they accepted Jewish doctrines that denied the Fatherland and opposed all that was nationalistic. Their strength and ability faded. The Jew had reached his goal.[17]

The program received far more ideological and propaganda support than concrete changes.[18] When Gottfried Feder tried to settle workers in villages about decentralized factories, generals and Junkers successfully opposed him.[19] Generals objected because it interfered with rearmament, and Junkers because it would prevent their exploiting their estates for the international market.[20] It would also require the breakup of Junker estates for independent farmers, which was not implemented.[6]

The Reichserbhofgesetz, the State Hereditary Farm Law of 1933, implemented this ideology, stating that its aim was to: "preserve the farming community as the blood-source of the German people" (Das Bauerntum als Blutquelle des deutschen Volkes erhalten). Selected lands were declared hereditary and could not be mortgaged or alienated, and only these farmers were entitled to call themselves Bauern or "farmer peasant", a term the Nazis attempted to refurbish from a neutral or even pejorative to a positive term.[21] Regional custom was only allowed to decide whether the eldest or the youngest son was to be the heir. In areas where no particular custom prevailed, the youngest son was to be the heir.[22][23][24][25] Still, the eldest son inherited the farm in most cases during the Nazi era[26] Priority was given to the patriline, so that if there were no sons, the brothers and brothers' sons of the deceased peasant had precedence over the peasant's own daughters. The countryside was also regarded as the best place to raise infantry, and as having a organic harmony between landowner and peasant, unlike the "race chaos" of the industrial cities.[27] It also prevented Jews from farming: "Only those of German blood may be farmers."[28]

The concept was a factor in the requirement of a year of land service for members of Hitler Youth and the League of German Girls.[29] This period of compulsory service was required after completion of a student's basic education, before he or she could engage in advanced studies or become employed. Although working on a farm was not the only approved form of service, it was a common one; the aim was to bring young people back from the cities, in the hope that they would then stay "on the land".[30] In 1942, 600,000 boys and 1.4 million girls were sent to help bringing in the harvest.[31] The concept was one of the reasons for the creation of the Reich Harvest Thanksgiving Festival whose main purpose was the recognition of the achievements of the German farmers. 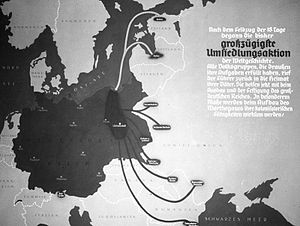 Blood and soil was one of the foundations of the concept of Lebensraum, "living space".[8] By expanding eastward and transforming those lands into breadbaskets, another blockade, such as that of World War I, would not cause massive food shortages, as that one had, a factor that aided the resonance of "Blood and soil" for the German population.[32] Even Alfred Rosenberg, not hostile to the Slavs as such, regarded their removal from this land, where Germans had once lived, as necessary because of the unity of blood and soil.[2] Mein Kampf prescribed as the unvarying aim of foreign policy the necessity of obtaining land and soil for the German people.[33]

While discussing the question of Lebensraum to the east, Hitler envisioned a Ukrainian "breadbasket" and expressed particular hostility to its "Russian" cities as hotbeds of Russianness and Communism, forbidding Germans to live in them and declaring that they should be destroyed in the war.[34] Even during the war itself, Hitler gave orders that Leningrad was to be razed with no consideration given for the survival and feeding of its population.[35] This also called for industry to die off in these regions.[36] The Wehrbauer, or soldier-peasants, who were to settle there were not to marry townswomen, but only peasant women who had not lived in towns.[1] This would also encourage large families.[37]

Furthermore, this land, held by "tough peasant races" would serve as a bulwark against attack from Asia.[38]

How blood and soil influenced art

Prior to the Nazi take-over, two popular genres were the Heimat-Roman, or regional novel, and Schollen-Roman, or novel of the soil, which was also known as Blut-und-Boden.[39] This literature was vastly increased, the term being contracted into a slogan "Blu-Bo", and developed a mysticism of unity.[1] It also combined war literature with the figure of the soldier-peasant, uncontaminated by the city.[1] These books were generally set in the nominal past, but their invocation of the passing of the seasons often gave them an air of timelessness.[40] "Blood and soil" novels and theater celebrated the farmer's life and human fertility, often mystically linking them.[41]

One of the anti-Semitic fabrications in the children's book Der Giftpilz was the claim that the Talmud described farming as the most lowly of occupations.[42] It also included an account of a Jewish financier forcing a German to sell his farm as seen by a neighbor boy; deeply distressed, the boy resolved never to let a Jew into his house, for which his father praised him, on the grounds that peasants must remember that Jews will always take their land.[43]

During the Nazi period in Germany, one of the charges put forward against certain works of art was that "Art must not be isolated from blood and soil."[44] Failure to meet this standard resulted in the attachment of the label, "degenerate art", to offending pieces. In Nazi art, both landscape paintings and figures reflected blood-and-soil ideology.[45] Indeed, some Nazi art exhibits were explicitly titled "Blood and Soil".[46] Artists frequently gave otherwise apolitical paintings such titles as "German Land" or "German Oak".[47] Rural themes were heavily favored in painting.[48] Landscape paintings were featured most heavily in the Greater German Art Exhibitions.[49] While drawing on German romantic traditions, painted landscapes were expected to be firmly based on real landscapes, the German people's Lebensraum, without religious overtones.[50] Peasants were also popular images, promoting a simple life in harmony with nature.[51] This art showed no sign of the mechanization of farm work.[52] The farmer labored by hand, with effort and struggle.[53]

The acceptance of this art by the peasant family was also regarded as an important element.[54]

Blut und Boden films likewise stressed the commonality of Germanness and the countryside.[55] Die goldene Stadt has the heroine running away to the city, resulting in her pregnancy and abandonment; she drowns herself, and her last words beg her father to forgive her for not loving the countryside as he did.[56] The documentary Ewiger Wald (The Eternal Forest) depicted the forest as being beyond the vicissitudes of history, and the German people the same because they were rooted in the story; it depicted the forest sheltering ancient Germans, Arminius, and the Teutonic Knights, facing the peasants wars, being chopped up by war and industry, and being humiliated by occupation with black soldiers, but culminated in a neo-pagan May Day celebration.[57] In Die Reise nach Tilsit, the Polish seductress is an obvious product of "asphalt culture," but the virtuous German wife is a country dweller in traditional costume.[58]

An Investigation of Global Policy with the Yamato Race as Nucleus made extensive use of the term, usually in quotation marks, and showing an extensive debt to the Nazi usage.[59]