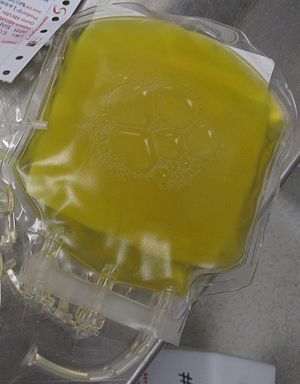 A unit of donated frozen plasma

Blood plasma is the pale yellow liquid component of blood that normally holds the blood cells in whole blood in suspension; this makes plasma the extracellular matrix of blood cells. It makes up about 55% of the body's total blood volume.[1] It is the intravascular fluid part of extracellular fluid (all body fluid outside of cells). It is mostly water (up to 95% by volume), and contains dissolved proteins (6–8%) (i.e.—serum albumins, globulins, and fibrinogen),[2] glucose, clotting factors, electrolytes (Na+, Ca2+, Mg2+, HCO3−, Cl−, etc.), hormones, and carbon dioxide (plasma being the main medium for excretory product transportation). Plasma also serves as the protein reserve of the human body. It plays a vital role in an intravascular osmotic effect that keeps electrolytes in balanced form and protects the body from infection and other blood disorders.[3]

Blood plasma is prepared by spinning a tube of fresh blood containing an anticoagulant in a centrifuge until the blood cells fall to the bottom of the tube. The blood plasma is then poured or drawn off.[4] Blood plasma has a density of approximately 1025 kg/m3, or 1.025 g/ml.[5]

Blood serum is blood plasma without clotting factors; in other words, "pure" blood.[4] Plasmapheresis is a medical therapy that involves blood plasma extraction, treatment, and reintegration.

It is on the WHO Model List of Essential Medicines, the most important medications needed in a basic health system.[6]

The same information, shown in molarity rather than mass.

Blood plasma volume may be expanded by or drained to extravascular fluid when there are changes in Starling forces across capillary walls. For example, when blood pressure drops in circulatory shock, Starling forces drive fluid into the interstitium, causing "third spacing."

Standing still for a prolonged period will cause an increase in transcapillary hydrostatic pressure. As a result, approximately 12% of blood plasma volume will cross into the extravascular compartment. This causes an increase in hematocrit, serum total protein, blood viscosity and, as a result of increased concentration of coagulation factors, it causes orthostatic hypercoagulability.[7] 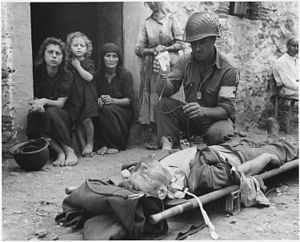 Private Roy W. Humphrey is being given blood plasma after he was wounded by shrapnel in Sicily in August, 1943.
File:Britain and us plasma packages wwii.jpg
Dried plasma packages used by the British and US militaries during WWII

The use of blood plasma as a substitute for whole blood and for transfusion purposes was proposed in March 1918, in the correspondence columns of the British Medical Journal, by Gordon R. Ward. "Dried plasmas" in powder or strips of material format were developed and first used in World War II. Prior to the United States' involvement in the war, liquid plasma and whole blood were used. The "Blood for Britain" program during the early 1940s was quite successful (and popular in the United States) based on Charles Drew's contribution. A large project began in August 1940 to collect blood in New York City hospitals for the export of plasma to Britain. Drew was appointed medical supervisor of the "Plasma for Britain" project. His notable contribution at this time was to transform the test tube methods of many blood researchers into the first successful mass production techniques.

Nonetheless, the decision was made to develop a dried plasma package for the armed forces as it would reduce breakage and make the transportation, packaging, and storage much simpler.[8] The resulting dried plasma package came in two tin cans containing 400 cc bottles. One bottle contained enough distilled water to reconstitute the dried plasma contained within the other bottle. In about three minutes, the plasma would be ready to use and could stay fresh for around four hours.[9]

Following the "Plasma for Britain" invention, Drew was named director of the Red Cross blood bank and assistant director of the National Research Council, in charge of blood collection for the United States Army and Navy. Drew argued against the armed forces directive that blood/plasma was to be separated by the race of the donor. Drew argued that there was no racial difference in human blood and that the policy would lead to needless deaths as soldiers and sailors were required to wait for "same race" blood.[10]

By the end of the war the American Red Cross had provided enough blood for over six million plasma packages. Most of the surplus plasma was returned to the United States for civilian use. Serum albumin replaced dried plasma for combat use during the Korean War.[11]

Plasma as a blood product prepared from blood donations is used in blood transfusions, typically as fresh frozen plasma (FFP) or Plasma Frozen Within 24 Hours After Phlebotomy (PF24). When donating whole blood or packed red blood cell (PRBC) transfusions, ABO blood type O- is the most desirable and is considered a "universal donor," since it has neither A nor B antigens and can be safely transfused to most recipients. Type AB+ is the "universal recipient" type for PRBC donations. However, for plasma the situation is somewhat reversed. Blood donation centers will sometimes collect only plasma from AB donors through apheresis, as their plasma does not contain the antibodies that may cross react with recipient antigens. As such, AB is often considered the "universal donor" for plasma. Special programs exist just to cater to the male AB plasma donor, because of concerns about transfusion related acute lung injury (TRALI) and female donors who may have higher leukocyte antibodies.[12] However, some studies show an increased risk of TRALI despite increased leukocyte antibodies in women who have been pregnant.[13]

Following fears of vCJD being spread through the blood supply, the British government began to import American plasma to meet its needs. In 2002, it purchased Life Resources Incorporated in order to be able to secure plasma supply from the United States.[14] The company became Plasma Resources UK (PRUK). In 2013, the British government sold an 80% stake in PRUK to American hedge fund Bain Capital, in a deal estimated to be worth £230 million.[15] The sale was met with criticism in the UK, over both the oversight of the company, and the impact on British blood needs. Confusion arose as some thought that the blood of British blood donors voluntarily donating to NHS Blood and Transplant Services would be sold for profit.[16] Currently, plasma donated in the United Kingdom is still not used due to concerns about vCJD,[citation needed] and is incinerated after component parts have been separated from it.

Safety and compensation to donors

In contrast to whole blood donation, plasma donation may be done much more often (2 times per week in some jurisdictions, compared to once per 8 weeks for whole blood donation), because the whole blood cells are returned to the body during the donation process. Most plasma is naturally replaced by the body within 48 hours. In some jurisdictions, and in contrast to whole blood donation, plasma donors may be compensated financially ($10–$100 per week for 3–7 hours of time, normally).[citation needed] It is usually defined as a compensation for time and trouble rather than a "purchase" or "sale" of a body part, for various legal, ethical, and cultural reasons.[citation needed]

Simulated body fluid (SBF) is a solution having a similar ion concentration to that of human blood plasma. SBF is normally used for the surface modification of metallic implants, and more recently in gene delivery application.