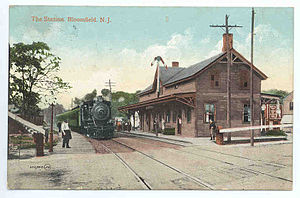 The Thomas Cadmus House was originally built in 1763 by Revolutionary War Lt. Col. Thomas Cadmus, and reconstructed in 1915 using the stones and foundation that had been used to build the original home. The house is at 223 Ashland Avenue (also known as 190 Washington Street) built on wooded land that been owned by his grandfather, Johannes Cadmus. General George Washington is said to have visited the home in 1778.[19] 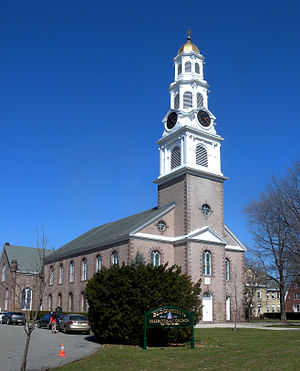 Presbyterian Church, for which the township was named

Bloomfield was incorporated as a township from portions of Newark Township by an act of the New Jersey Legislature on March 23, 1812.[20] The new township took its name from the Presbyterian parish, which had been named for Governor of New Jersey Joseph Bloomfield.[21][22][23]

Other unincorporated communities, localities and place names located partially or completely within the township include Halycon and Watsessing.[33]

In comparison to the other municipalities in the U.S., the cost of living in Bloomfield was an average 20% higher than the U.S. average.[48]

Brookdale Park, established in 1928, covers over 121 acres (49 ha) in Bloomfield and Montclair, making it the third-largest park in Essex County, of which 77 acres (31 ha) of it are in Bloomfield.[51] Watsessing Park, which is the county's fourth-largest park, covers 69.67 acres (28.19 ha) split between Bloomfield and East Orange (60 acres (24 ha) in Bloomfield), and features sections of the Second River and Toney's Brook flowing through the park.[52] Both parks are administered by the Essex County Department of Parks, Recreation, and Cultural Affairs. 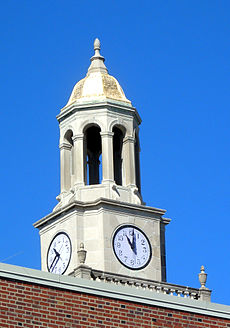 Bloomfield operates under a Special Charter granted under an Act of the New Jersey Legislature. The township is governed by a mayor and a six-member Township Council. The mayor and three councilmembers are elected at-large, and three members are elected from each of three wards, with all positions chosen on a partisan basis as part of the November general election. Councilmembers are elected to three-year terms of office on a staggered basis, with the three at-large seats (and the mayoral seat) up for election together and the three ward seats coming up for election two years later.[5] Bloomfield's charter retains most of the characteristics of the Town form, with additional powers delegated to an administrator.[54]

The township maintains its own police department.

The town is protected by a fire department consisting of 78 active professional firefighters who operate out of four stations 24 hours a day, 7 days a week. There is also a squad of volunteers. In 2009, the department received international accreditation.[59] The Fire Prevention Bureau is operated by the department and consists of two inspectors and two civilians.[60] The department apparatus consist of four engines, one Truck/Ladder, a rescue and three reserve apparatus.[61]

Bloomfield is split between the 10th and 11th Congressional districts[62] and is part of New Jersey's 28th state legislative district.[8][63][64] Prior to the 2010 Census, Bloomfield had been part of the 8th Congressional District, a change made by the New Jersey Redistricting Commission that took effect in January 2013, based on the results of the November 2012 general elections.[65] In the redistricting that went into effect in 2013, 24,480 residents in the northern portion of the township were placed in the 10th District, while 22,835 in the southern section were placed in the 11th District.[62][66]

Saint Thomas the Apostle Parish School, which serves grades K-8, is operated under the supervision of the Roman Catholic Archdiocese of Newark.[121][122]

Bloomfield College, a liberal arts college founded in 1868, is located in downtown Bloomfield near the town green. The college has approximately 2,000 students and is affiliated with the Presbyterian Church.[123]

The major New Jersey highway artery that serves Bloomfield is the Garden State Parkway, the longest road in the state.[125] It has four interchanges in the township. Interchanges 148 in the south of Bloomfield and 151 in the north are complete interchanges, while 149 and 150 are partials. The Parkway's Essex toll plaza is southbound just south of interchange 150 in the township. There are two service areas on the Parkway in Bloomfield, one for northbound and one southbound.[126] Troop E of the New Jersey State Police, which patrols the full length of the Garden State Parkway, has a station in Bloomfield at northbound milepost 153.[127]

South Bloomfield is served by two stations of the New Jersey Transit Montclair-Boonton Line to Hoboken Terminal or to Penn Station in Midtown Manhattan via the Secaucus Junction.[128] About 55% of the weekday trains terminate in Penn Station via Midtown Direct. On weekends the line terminates in Hoboken. The Bloomfield train station is located off of Bloomfield Avenue in the downtown area.[129] The Watsessing Avenue rail station is at the corner of Watsessing Avenue and Orange Street, and is located below ground.[130]

Bloomfield used to be served by other passenger rail lines. The Rowe Street Station was served by the Boonton Line until September 2002, when it was closed as part of the addition of Midtown Direct service to the township.[131] The Walnut Street station, on the same line, was closed in 1953 when the Garden State Parkway was built through it.

The Grove Street station on the Newark City Subway line of the Newark Light Rail at the south end of Bloomfield provides service to Newark Penn Station, created as part of an extension to Belleville and Bloomfield that opened in 2002.[132] This station was part of the Orange Branch of the New York & Greenwood Lake Service of the Erie Railroad with service to Jersey City which last saw service in 1955.

People who were born in, residents of, or otherwise closely associated with Bloomfield include: