Blowing Rock is a town in Watauga and Caldwell counties in the U.S. state of North Carolina. The population was 1,241 at the 2010 census.[3]

Before 1752, when Bishop August Gottlieb Spangenberg of the Moravian Church visited the Blowing Rock, the windy cliffs of the area were home to the Cherokee and the Catawba Native American tribes.

After the mid-18th century, when hardy Scots-Irish pioneers began to settle in the region, the mountain passes from southern Virginia into Kentucky attracted many colonists, farmers, hunters, and trappers who continued south to the mountains of North Carolina. The first family to settle in Blowing Rock were the Greenes, who were established by the mid-19th century on a site that would become the Green Park Hotel property.

Other early settlers in Blowing Rock included the Hayes, Coffey, Bolick, Estes and Storie families. During the American Civil War the mountains of North Carolina often witnessed fierce guerrilla warfare between groups of pro-Confederate and pro-Union fighters. To keep their families safe, men leaving for service in the Confederate Army often sent them to Blowing Rock, which became a local refuge from the fighting.

After the Civil War many of these veterans would join their families and remain in the Blowing Rock area. At the same time, summer residents began to come up from the nearby city of Lenoir to enjoy the cool fresh air and magnificent mountain views. Seeing the potential of their village to become a haven for well-to-do tourists, the residents of Blowing Rock had their village incorporated into a town on March 11, 1889. The town's first mayor was "Uncle" Joe Clarke, and the town initially had a population of about 300.

As word traveled to other parts of the South about the merits of Blowing Rock, more visitors began to arrive, first camping out, and later taking rooms at boarding houses such as the Hayes and Martin houses on Main Street. Eventually there were more visitors than the existing boarding houses could handle, and so many homes were turned into hotels. The first hotel in Blowing Rock was the Watauga Hotel, built in 1884; the hotel added cottages in 1888. The Green Park Hotel opened in 1891, followed eight years later by the Blowing Rock Hotel. Walter Alexander, a prominent local resident, touted the clean air and healthy environment of Blowing Rock; in 1922 he opened his own hotel, called Mayview Manor.

As the tourist economy became Blowing Rock's main industry in the late 19th century, the town was forced to adapt to meeting the needs of tourists. The need for cleaner and better streets (most streets then were simply dirt tracks) led to the paving of the town's streets and highways. Another issue involved the need to build fences to keep farm animals from wandering into town and disturbing visitors - at the time most farms in the area were not fenced. In 1896 the town passed an ordinance which required local farmers to fence in their livestock.

The introduction of the automobile and improved roads early in the 20th century further eased the journey to Blowing Rock, and visitors began to arrive from as far away as Florida. Today Blowing Rock remains a tourist destination for visitors from all over the United States. Due to the town's well-to-do, out-of-state summertime residents, Blowing Rock boasts top-quality restaurants, hotels, golf courses, and other attractions. A recent priority for Blowing Rock's residents has been to preserve and protect the town's historic structures and maintaining the small-town charm and scenery that has attracted so many people for the last 150 years. 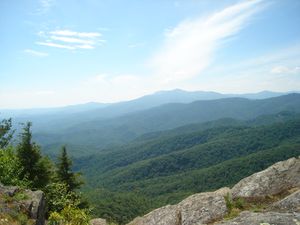 The rocky outcropping of Blowing Rock
File:Blowing Rock-27527-2.jpg
Looking southeast at sunset over the foothills of the Blue Ridge

Blowing Rock is located in southern Watauga County at Lua error in Module:Coordinates at line 668: callParserFunction: function "#coordinates" was not found. (36.129663, -81.672566),[6] in the Blue Ridge Mountains. The southernmost portion of the town, including the actual Blowing Rock cliff, is located in Caldwell County.

The town is located on the crest of the Blue Ridge. Most of the town lies just north of the crest, with waters draining north to the Middle Fork of the New River and thence to the Ohio River valley, while to the south of the ridgecrest, waters flow via the Johns River to the Catawba River valley and eventually to the Atlantic Ocean in South Carolina.

The town's elevation of 3,500 to 3,600 feet (1,100 to 1,100 m) above sea level results in cooler summer temperatures than lowland areas to the east and south. Daytime temperatures in the summer rarely rise above 80 °F (27 °C). Temperatures in the winter are much colder and harsher than would be expected in a southern state. Daytime highs can frequently fall into the 20s or lower. Snow, sleet, and freezing rain are all common in the winter months. Springtime in Blowing Rock is cool and generally pleasant.

Rainfall is moderate; thunderstorms are occasional, and rarely severe.

There are 663 households, of which

35.4% of all households were made up of individuals and 14.6% had someone living alone who was 65 years of age or older. The average household size was 2.03 persons and the average family size was 2.59.

The population consists of

The town of Blowing Rock takes its name from an unusual rock formation which juts over 1,500 feet (460 m) above the Johns River gorge. Due to the rock's shape and size, wind currents from the gorge often blow vertically, causing light objects to float upwards into the sky.

Blowing Rock is the site of Glen Burney Falls and Glen Marie Falls.

The Blowing Rock area was once fought over by the Cherokee and Catawba Native American tribes. According to legend, two lovers - one from each tribe - were walking near the rocks when the man received a notice to report to his village and go into battle. When his lover urged him to stay with her, he became so distraught that he threw himself off the blowing rock into the gorge. The woman prayed to the Great Spirit to return her lover, and the Spirit complied by sending a gust of wind which blew the man back up the cliff and landed him safely on the blowing rock itself. This story of course is fictional but it was used as a draw for the attraction. In the 1980s, a billboard in Wilkesboro for Blowing Rock showed two Indians holding hands, one standing on the rock and one "floating". Today "The Blowing Rock" is a tourist attraction and is known for its superb views of the surrounding Blue Ridge Mountains.

Another tourist attraction in Blowing Rock is the Tweetsie Railroad theme park, which is home to the only remaining fully functional steam engine train in North Carolina. Visitors to Tweetsie can ride the train for 3 miles (5 km) and enjoy the mountain scenery; the park also contains traditional amusement-park rides and attractions. Other attractions in the Blowing Rock area include the elegant and historic Green Park Inn, Mystery Hill, the Blowing Rock Country Club, and the Blowing Rock Art & History Museum.

On the nearby Blue Ridge Parkway is Moses Cone Memorial Park, which offers scenic views of the surrounding mountains. The park contains the Moses Cone Manor and Estate, and features two large lakes surrounded by forests and trails. These trails wind for miles, and were once carriage trails for the Cone family. Adjacent to the park is the Blowing Rock Equestrian Preserve, where visitors can board their horses convenient to the trails; there are 25 miles (40 km) of riding and carriage trails in the park.

Annual festivals and events in Blowing Rock include the "Art In The Park" festival, a monthly summertime (May-Oct) event in downtown Blowing Rock where artists set up booths to sell their work to tourists; the Fourth of July festival and parade; Blowing Rock Winterfest in November; the Blue Ridge Wine and Food Festival in April; Christmas in the Park and Lighting of the Town festivities, including a Holiday Parade; the Symphony by the Lake at Chetola Resort; and the Blowing Rock Charity Horse Show which has been a tradition for 84 years. It is the longest continuously run horse show in the United States. The show features some of the best horse riders in the Eastern United States.

The Blowing Rocket newspaper covers Blowing Rock. The newspaper is owned by Tennessee-based Jones Media publishing company and is a sister publication of the Watauga Democrat in Boone.

Blowing Rock News is a digital-only news publication focused on Blowing Rock and its surrounding communities.

Author Tom Robbins was born in Blowing Rock in 1932 and moved in 1943 to Burnsville, North Carolina. He recounts some early memories of Blowing Rock in Wild Ducks Flying Backward and in his 2014 "memoir" Tibetan Peach Pie.

Blowing Rock is also home to a group referred to as "The Mormish Council". Blowing Rock is the home of artists of all types, many of whom use the local scenery for their work. Jan Karon, a native of nearby Lenoir, moved to Blowing Rock in the late 1980s to write fiction. Her bestselling Mitford series of novels is set in a small town based on Blowing Rock; she calls the town "Mitford".

Ralph T. Troy, the mayor of Monroe, Louisiana, from 1972 to 1976, later relocated to North Carolina and resided in Blowing Rock.