A Blue is an award earned by athletes at a university and some schools for competition at the highest level. The awarding of Blues began at Oxford and Cambridge universities in England. It is awarded at British, Australian and New Zealand universities.

The first sporting contest between the universities of Oxford and Cambridge was held on 4 June 1827, when a two-day cricket match at Lord's, organized by Charles Wordsworth, nephew of the poet William, resulted in a draw. There is no record of any university "colours" being worn during the game.[1][2]

At the first Boat Race in 1829, the Oxford crew was dominated by students of Christ Church, whose college colours were dark blue. They wore white shirts with dark blue stripes, while Cambridge wore white with a pink or scarlet sash. At the second race, in 1836, a light blue ribbon was attached to the front of the Cambridge boat, probably as it was the colour of Eton. These colours — light blue for Cambridge, and dark blue for Oxford — became the official colours of the two boat clubs, and through the rivalry of the Boat Race, the colours became inextricably linked with the universities and contests between the two.[1][3]

Not to be confused with Cambridge Blue (colour).

Athletes at the University of Cambridge may be awarded a Full Blue (or simply a Blue), Half Blue, First Team Colours or Second Team Colours for competing at the highest level of university sport, which must include being in a Varsity match or race against the University of Oxford. A Full Blue is the highest honour that may be bestowed on a Cambridge athlete, and is a much-coveted and prestigious prize. In general, the Full Blue standard is approximately that of being successful at a national level of student competition, and the Half Blue standard is that of being successful at county or regional level.

Once light blue had been chosen as the colour of Cambridge's Boat Club, the other university sport clubs followed suit, though out of courtesy would request permission from the Boat Club before awarding such a "Blue". In the 1860s the three senior sports — rowing, cricket and athletics — were awarding Blues, and the presidents of each formed an informal "Blues Committee" to oversee such awards. By 1880 a number of smaller clubs involved in Varsity matches had successfully requested the right to award "Half Blues".[1]

The awarding of a Full Blue often requires a person to fulfill a number of requirements in the same academic year, particularly in sports with Discretionary Full Blue status. If, for whatever reason, an exceptional athlete is of or above Full Blue standard but does not fulfill all the requirements for the 'automatic' award of a Full Blue in any given year, the committee has the authority to grant an Extraordinary Full Blue to that person subject to scrutiny of the particular case. The individual's case must be presented to the Blues Committee in person and must be backed up by substantial evidence and references. The award is unlikely to be made unless the person is of world-class or at least international standard.

Each sport has specific criteria for each award; details of the individual criteria for women's sports can be found here, and are summarised below. 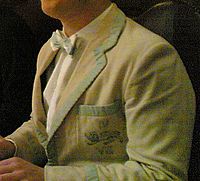 The winner of a Blue or Half Blue is entitled to wear a blues blazer, which is one of the most recognisable and distinctive garments associated with Cambridge University. Full Blue blazers are completely coloured Cambridge Blue. Half Blue blazers have a number of different designs, depending on the wearer's sport; a typical design is an off-white blazer with Cambridge blue lapels and trimmings. There is a variety of other Blue and Half Blue paraphernalia, including scarves, ties, pullovers, bow ties, caps and squares. Such items are worn with pride.

As of May 2011[update], the colour recognised officially by the University as Cambridge Blue actually has a slight green tint.[5]

In 2008 in Cambridge an alumna launched Oxbridge Blues Jewellery [6] specifically for women's Blues and Half Blues at the two Universities. These are the only blues item to have been licensed by the University of Cambridge.

Not to be confused with Oxford Blue (colour).

The committees are administered by an elected President, Secretary and Treasurer who serve one year. Unlike at Cambridge, where the President of Cambridge University Boat Club holds the position, at Oxford, any Captain can be elected President, regardless of sport or status.

The role of the President is to call and serve as Chair of any meeting of the committee, of which there are normally 3 per year (6 for the women). They also serve as the representative of the committee and sit on the University Sports Strategy Committee and the Executive Committee of the Sports Federation. Both Presidents along with the Director of Sport represent Oxford at any meetings of a Joint Blues Committee held with Cambridge. The purpose of the Joint Blues Committee is to discuss issues of eligibility for the Varsity match and to settle any disputes between the sporting communities of the two universities. 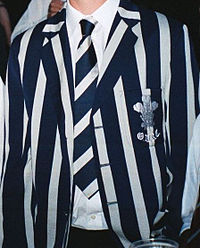 The colour of an Oxford Full Blue blazer is dark blue. The Oxford Half Blue blazer can be one of two designs. Either it is composed of thick vertical stripes of dark blue and off-white, as in the image to the right, or it can be dark blue, as the Full Blue blazer, with two white stripes above the club badge on the left breast.

The Oxford range of Oxbridge Blues Jewellery[8] was launched in Oxford at the Women's Blues Award Ceremony in the Natural History Museum in 2012. The range is the same as the Cambridge design except that the semi-precious stones are navy blue and white.

Blues were first awarded in 1904, as one of the first items of business of the newly-formed Sports Union, with retrospective awards made back as early as 1870. Initially, awards were made automatically to all participants in an InterVarsity contest, with the level (Full or Half Blue) dependant on the sport. In 1911, this model was replaced with the formation of a 'Blues Advisory Board' to determine the awards based on an individual's performance. The BAB continues to serve this role today.[10]

Blues and Half-Blues have been awarded at the University of Queensland since 1912. Blues have been awarded for outstanding performances in club fixtures, representative games, and inter-university competitions as well as for international representation whilst studying at the University. The University of Queensland Blue is the highest sporting accolade an athlete can receive from the university. In recent years, UQ Sport through its Blues Advisory Committee, has developed a selection method and criteria to ensure that Blues and Half-Blues at the university are of the highest standard. Each year these awards are presented at the UQ Sport Blues Awards Dinner.[11]

Since 1919 the New Zealand Universities Blue has been awarded to NZ University students who have achieved excellence both on and off the field of play. Currently University Sport New Zealand is responsible for presenting this award[12]

In addition, individual universities will award their own Blues. For example, University of Otago Blues date from 1907,[13] therefore pre-dating the New Zealand Universities Blue.