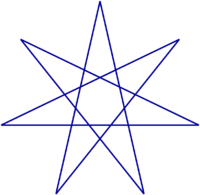 A blue septegram is used as the symbol of the Blue Star tradition.

Blue Star Wicca is one of a number of Wiccan traditions, and was created in the United States in the 1970s based loosely on the Gardnerian and Alexandrian traditions. It continues to be practiced today in areas of the United States (including Massachusetts, Minnesota, Missouri, New Hampshire, Washington, New Jersey, New Orleans, and others), as well as having members in the United Kingdom, Ireland and Canada.

The "Coven of the Blue Star", established in Philadelphia, Pennsylvania in 1975 by Frank Dufner,[1] gave birth to both the name and the original membership of what would eventually become the Blue Star tradition. In 1980, on its membership application to the Covenant of the Goddess, the coven described itself (with tongue in cheek) as practicing "Great American Nontraditional Collective Eclectic Wicca". Early hives from the original coven spread throughout the New York metropolitan area.

Tzipora Katz, who had joined the coven in 1977, and with her then-husband Kenny Klein, left on a folk music tour after the 1983 release of their cassette Moon Hooves in the Sand, which contained Blue Star liturgical music. The music tour facilitated the spread of the tradition throughout the United States, as the couple helped to found new covens while on the road.[2] In 1992, Tzipora Klein would publish Celebrating Life: Rites of Passage For All Ages through Delphi Press. Kenny Klein published The Flowering Rod: Men, Sex and Spirituality in 1993, also through Delphi Press.

As new covens were formed, it was common practice to include the words "blue" or "star" (Raven Star, for example, or Wolf Star) in the name, but this practice is less observed nowadays. Some groups have used references to stars (Nova Grove, for example, or Polaris Coven), but some simply choose the name that inspires them (Compass Rose, SummerOak, Serenity, or Braided Stream).

Blue Star has undergone many changes over the years; having a widespread, diverse, and autonomous covens and Groves, with a decentralized hierarchy, it is a living tradition. Though there are differing points of view on a variety of practices, and the occasional disagreements among individuals, it is universally accepted[citation needed] that a unique feature of Blue Star Tradition is that its participants regard each other as family; periodic convocations are referred to as Family Gatherings, and when together its practitioners feel at home.[citation needed]

Blue Star remains a predominantly initiatory coven-based tradition in the model of the Gardnerian or Alexandrian traditions, but a number of "solitary" practitioners exist, typically with a form of long-distance relationship with an established group. There is no self-initiation in Blue Star.

Blue Star practitioners are known primarily for their emphasis on community service as a means to celebrate the gods and protect the interests of the contemporary Pagan community. Other hallmarks include the use of music in their ritual and liturgy (arguably unusual amongst traditional Wiccans), the importance placed upon a ritual feast, the use of a septegram as a symbol rather than a pentagram, and initiatory tattooing.[1] Blue Star and the Feri tradition are the only two large traditions of witchcraft to feature a septegram prominently in their symbolism.[2] Blue Star rituals typically have a round altar in the centre of the circle of participants. The positioning and handling of the ritual tools on the altar is given special attention within the tradition.[1]

The Blue Star tradition's theology allows for enough flexibility to allow polytheists, pantheists and monotheists to participate in the tradition, and rituals can involve prayer or invocation to Wiccan deities, the gods and goddesses of Pagan peoples, or deified abstractions.[2]

Many parts of the standard Blue Star liturgy, such as quarter calls, may be sung instead of spoken.

Blue Star is unusual for having a five-part rank system, as opposed to the three degree system of most initiatory Wiccan traditions.

Dedication is the first rite of passage within the Blue Star tradition, and indicates a commitment to a Pagan spirituality generally and a loose commitment to the tradition specifically. Those who have been through this ceremony are referred to as "Dedicants".

Neophyte marks an intermediary step between Dedication and Initiation, and indicates both a level of facility with Blue Star practice and theory, and a willingness to take on increased responsibility within the tradition. Neophyte differs from the other ranks in being seen as a preparation for Priesthood, as opposed to an end in and of itself. After this rite of passage, the person is referred to as a "Neophyte".

First Degree Initiation is the ritual through which someone enters the clergy within Blue Star. Someone who has attained their First Degree is referred to as a priest, priestess, or simply "initiate."

Second Degree recognizes further training and commitment within Blue Star beyond that of the First Degree. It is usually, although not always, the time when one takes a leadership role in a coven, preparatory to "hiving" or establishing an independent coven.

Third Degree is given to those people who are judged by their teachers to be capable of leaving the coven that they were trained in and taking full responsibility for creating a new coven of their own.

Relationship to other traditions

As mentioned above, Blue Star Wicca was inspired at least in part by both the Gardnerian and Alexandrian traditions. It was also influenced by the American Welsh tradition and the Pagan Way series of class material.[2]

In turn, Blue Star has inspired other traditions, such as Maidenhill Wicca, and Braided Wheel.

Blue Star has a special relationship to the Odyssean tradition, as a "sister" or "cousin" tradition.[2][3]