BoardGameGeek is a website that was founded in January 2000 by Scott Alden and Derk Solko as a resource for board gaming hobbyists.[2][3] The database holds reviews, articles, session reports, images, videos, and files for over 77,000 different games and expansions, and over 21,000 game designers. BoardGameGeek includes German-style board games, wargames, card games and other tabletop games, as well as public-domain card games like Spades. The site also features bulletin boards, a marketplace, several online boardgames, and a gamer database to help gamers find each other in the same location. BoardGameGeek was the recipient of the 2010 Diana Jones Award, which recognized it as "a resource without peer for board and card gamers, the recognized authority of this online community."

In addition to the game database, one of the features of BoardGameGeek is the statistical information obtained from player ratings. The site allows users to rate games on a 1–10 scale. The average and Bayesian average ratings are presented for each game. The Bayesian system adds dummy ratings in order to pull the average of games with fewer ratings closer to the overall mean. It is this set of averages that is used to generate a ranked list of games. Only games with at least 30 ratings are included in the ranked list.

In 2006, an additional list of top-ranked wargames was created. Due to the generally smaller number of ratings these games receive, they often become lost in the overall rating list. In 2010 other category lists were introduced, including Abstract Games, Customizable Games, Children's Games, Family Games, Party Games, Strategy Games, and Thematic Games.

Players can also rate how light or heavy (essentially its complexity in rules and/or gameplay) a game is on a scale of 1–5, though this is not used in the calculation of the rankings. There have been only six games (nine if you count pranks and bugs) that have achieved No. 1 in the BoardGameGeek rankings from 2001-2016. They are:

Additionally there have been a few games to reach number one in other ways: The Game of Life reached number one on Feb 25 2006 when a bug was exploited that allowed a user to rate that game 65536 out of 10 (The bug has been fixed), and Monkey Auto Races reached #1 as part of an April Fools Day, prank coordinated by users of the site in 2007, and in another April Fools Day prank, this time by the site administrators in 2010, games were ranked in order not by rating, but by when they were entered into the database, sending Die Macher to the top of the charts. [4] 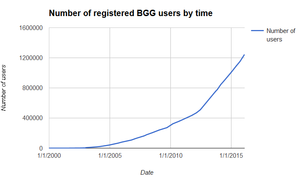 BoardGameGeek is a large, international community with over 1,000,000 users, as of February 18, 2015.[5] One major activity is the creation of GeekLists, which are often lists of games based on a particular theme or games that people want to trade, and which are also used as a means to discuss game or non-game related topics. There are forums in which members discuss topics such as the merits of theme versus mechanics, European versus American design, game ratings, game recommendations, game groups, and other general gaming activity. Gamers can also get to know each other online by using the chat room, by participating in Guilds, writing blogs, or listening to podcasts. There is a large community of Werewolf players, and online games are frequently arranged on the forums. A Secret Santa gift exchange was introduced several years ago, with more than 1700 participants in 2010, and more than 2700 participants in 2014. The annual BGG.CON game convention also helps foster this sense of community, by giving BoardGameGeek members opportunity to meet and play games in person.

The site uses a virtual currency called GeekGold to reward users who provide site content, including entries for new games, pictures of games, game reviews, game sessions, rule translations, and play aids, many of which are approved by an automated user moderation system called GeekMod. GeekGold is also awarded to members who support the site financially and contribute to the annual support drive. GeekGold can be used to purchase an avatar as well as various types of badges, is transferable to other users in the form of "tips", and is occasionally traded for money or games, although its actual value has deflated significantly over time.[6][7]

Another system for rewarding individual effort is the use of a "thumbs up" icon for good contributions. Any user can award a thumbs up whenever he or she sees something that deserves recognition. Thumbs are recorded on a user's profile, but cannot be used to purchase benefits.

Beginning in 2005 Scott Alden and Derk Solko inaugurated an annual boardgaming convention called BGG.CON. While the convention was open to anybody it was overwhelmingly attended by registered users of BoardGameGeek, and was heavily promoted on the website.

The first BGG.CON was held at The Westin City Center in Dallas Texas (now closed) and had an attendance of 250 people. The convention was organized primarily around open gaming, and it featured a large game library from which attendees could check out a game. Other scheduled events included a flea market, a Texas Hold 'Em tournament, a game show contest, and grand prize drawings. In 2006 attendance increased to 400 persons. A treasure hunt was added to the list of scheduled events, and the Golden Geek Awards were presented for the first time.

In 2007 BGG.CON was moved to The Westin DFW in Irving, TX in order to accommodate growth in attendance. This location hosted the following events

In 2012, the convention was again moved to a larger venue to accommodate the growth of even more attendees, this time to the Hyatt Regency DFW hotel inside the grounds of the Dallas/Fort Worth International Airport in Dallas, TX. This new location has been used for the following events

In 2014 two additional conventions were announced for 2015:

Boardgame News, an industry-specific news site dedicated to providing large quantities of news and commentary regarding boardgames, and originally hosted at BoardgameNews.com, announced in the final months of 2010 that it would be merging with BoardgameGeek.com.[10] [11] Some BoardgameNews editorial columns were not transferred to BoardGameGeek at the time of this merger, since the guest writers of those columns decided to create their own web site, Opinionated Gamers, in order to keep their independence.

After the assimilation of BoardgameNews, information about new releases and other game news, as well as Designer Diaries, have been published regularly on the BoardGameGeek News blog edited by W. Eric Martin. In recent years this has been expanded with another official blog entitled IOS Board Games, which is a companion blog announcing news and reviews for digital games.

2006 was the first year of the Golden Geek Awards which are to be given annually to the best new games of the year as selected by registered BoardGameGeek users. The awards use the Schulze method to determine the winners. From 2010 the RPGGeek and VideoGameGeek sites joined the Golden Geek Awards The award categories and winners are listed below.[12]