The Board of Inland Revenue Stamping Department Archive in the British Library contains artefacts from 1710 onwards, and has come into existence through amendments in United Kingdom legislation.[1]

This collection is a key resource for researchers interested in Great Britain and some Commonwealth countries postal and revenue philately and particularly impressed duty stamps.[1] 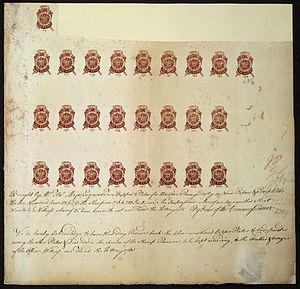 Proof sheet of one-penny stamps submitted for approval to Commissioners of Stamps by engraver. 10 May 1765.

The archive includes a unique proof sheet of 26 Revenue 1765 Newspaper and Pamphlet one penny impressions showing the registration certificate. These were issued to apply the Stamp Act of 1765 intended to raise taxes to fund the defence of the American Colonies. The tax applied to legal documents, licenses, newspapers, pamphlets and almanacs in the American Colonies, Quebec, Nova Scotia, Newfoundland, Florida, the Bahamas and the West Indian Islands. The taxes resulted in public protest and rioting. The tax was abandoned after a few months due to its unpopularity but the political damage contributed to the War of Independence in 1775.[2] 32 copies of the original dark-red proof impressions made in 1765 have survived world-wide and 26 are on this sheet. Five are in private hands and one is in the Smithsonian National Postal Museum's permanent collection.[3]

Under the Inland Revenue Act of 1849 the control of revenue stamps transferred from the Excise Department to the Stamp Department at Somerset House. Proofs and specimens of stamps from 1710 were also deposited. The Stamping Department produced revenue and fee stamps until 1934 when responsibility was transferred to the Stationery Office.[1]

Until 1914, stamping of legal documents and production of postage and revenue stamps had been by the Inland Revenue, and by managed external contractors. Under The Inland Revenue and Post Office (Powers and Duties) Order, 1914, responsibility for the manufacture of postage stamps passed to the General Post Office, with some production at Somerset House until 1934. During that period imprimatur sheets of stamps were kept by the Inland Revenue and the Post Office, and earlier examples from 1840-1914 was passed to the G.P.O. Archives (now Consignia, Heritage Services). Reference collections of these stamps were maintained and are virtually complete.[1]

The archive has over 400,000 items and is more easily understood by being sub-divided into various collections:[1][4]