From Infogalactic: the planetary knowledge core
Jump to: navigation, search
This article is about the committee of the United Kingdom Privy Council. For the more general article on business networks, see Chamber of commerce. For other uses, see Board of Trade (disambiguation). 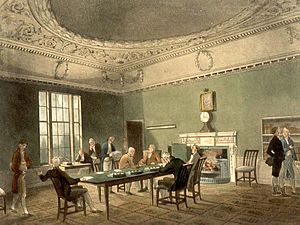 The Board of Trade, originally the Lords of Trade or Lords of Trade and Plantations is a committee of the Privy Council of the United Kingdom, first established as a temporary committee of inquiry in the 17th century that evolved gradually into a government department with a diverse range of functions.[1] This department was merged with the Ministry of Technology in 1970 to form the Department of Trade and Industry (since 2009, the Department for Business, Innovation and Skills), headed by a Secretary of State for Trade and Industry (now Secretary of State for Business, Innovation and Skills), who is also President of the Board of Trade. The full Board has met only once since the mid-20th century, during commemorations of the bicentenary of the Board in 1986.

In 1621, King James I directed the Privy Council of England to establish a temporary committee to investigate the causes of a decline in trade and consequent financial difficulties. The Board's formal title remains "The Lords of the Committee of the Privy Council appointed for the consideration of all matters relating to Trade and Foreign Plantations".

In 1696, King William III appointed eight paid commissioners to promote trade in the American plantations and elsewhere. The Lords Commissioners of Trade and Foreign Plantations, appointed in 1696 and commonly known as the Lords of Trade, did not constitute a committee of the Privy Council, but were, in fact, members of a separate body. The board carried on this work but also had long periods of inactivity, devolving into chaos after 1761 and dissolved in 1782 by an act of Parliament by the Rockingham Whigs.

It was the Lords of Trade who, in 1675, originated the idea of transforming all of the colonies in America into Royal Colonies for the purpose of securing English trade against the French. They brought New Hampshire under the Crown, modified Penn's charter, refused a charter to the Plymouth colony, and taking advantage of the concessions of the charters of Massachusetts and New York, created the Dominion of New England in 1685, thereby transforming all the territory from the Kennebec to the Delaware into a single crown colony. [2]

William Pitt the Younger re-established the committee in 1784, and an Order in Council of 23 August 1786 provided the formal basis that still remains in force. A secretariat was established which included the president, vice president and board members. By 1793, the board still remained in its old structure, with 20 members including the Archbishop of Canterbury.[3] After 1820 the board ceased to meet regularly and the business was carried out entirely by the secretariat. The short name of "Board of Trade" was formalised in 1861.

In the 19th century the board had an advisory function on economic activity in the UK and its empire. During the second half of the 19th century it also dealt with legislation for patents, designs and trade marks, company regulation, labour and factories, merchant shipping, agriculture, transport, power etc. Colonial matters passed to the Colonial Office and other functions were devolved to newly created departments, a process that continued for much of the 20th century.

The original commission comprised the seven (later eight) Great Officers of State, who were not required to attend meetings, and the eight paid members, who were required to attend. The Board, so constituted, had little real power, and matters related to trade and the colonies were usually within the jurisdiction of the Secretaries of State and the Privy Council, with the Board confining itself mainly to colonial administration.