From Infogalactic: the planetary knowledge core
Jump to: navigation, search
For other uses, see Boat (disambiguation). 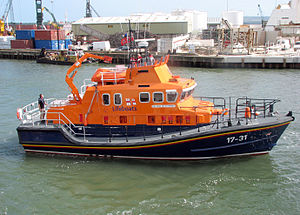 At 17 metres long, the Severn-class lifeboats are the largest class of UK lifeboat.

A boat is a watercraft of any size designed to float or plane, to work or travel on water. Small boats are typically found on inland (lakes) or in protected coastal areas. However, boats such as the whaleboat were designed for operation from a ship in an offshore environment. In naval terms, a boat is a vessel small enough to be carried aboard another vessel (a ship). Another less restrictive definition is a vessel that can be lifted out of the water. Some definitions do not make a distinction in size, as bulk freighters 1,000 feet (300 m) long on the Great Lakes are called oreboats. For reasons of naval tradition, submarines are usually referred to as 'boats' rather than 'ships', regardless of their size and shape.

Boats have a wide variety of shapes, sizes and construction methods due to their intended purpose, available materials or local traditions. Canoe type boats have a long history and various versions are used throughout the world for transportation, fishing or sport. Fishing boats vary widely in style partly to match local conditions. Pleasure boats include ski boats, pontoon boats, and sailboats. House boats may be used for vacationing or long-term housing. Small boats can provide transport or convey cargo (lightering) to and from large ships. Lifeboats have rescue and safety functions. Boats can be powered by human power (e.g., rowboats), wind power (e.g., sailboats) and motor power (e.g., propellor-driven motorboats driven by gasoline or diesel engines). 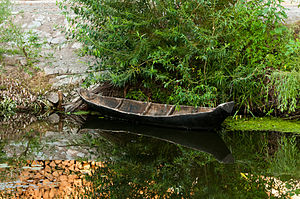 A Ukrainian dugout (dowbanka) dating from the end of the 19th century. Radomysl Castle, Ukraine[1]

Dugouts are the oldest type of boats found by archaeologists,[2] and boats have served as transportation since the earliest times.[3] Circumstantial evidence, such as the early settlement of Australia over 40,000 years ago, findings in Crete dated 130,000 years ago,[4] and findings in Flores dated to 900,000 years ago,[5] suggest that boats have been used since prehistoric times. The earliest boats are thought to have been logboats,[6] and the oldest boats found by archaeological excavation date from around 7,000–10,000 years ago. The oldest recovered boat in the world is the Pesse canoe, a dugout made from the hollowed tree trunk of a Pinus sylvestris and constructed somewhere between 8200 and 7600 BC. This canoe is exhibited in the Drents Museum in Assen, Netherlands.[7][8] Other very old dugout boats have also been recovered.[9][10][11] Rafts have operated for at least 8,000 years.[12] A 7,000-year-old seagoing reed boat has been found in Kuwait.[13] Boats were used between 4000 and 3000 BC in Sumer,[3] ancient Egypt[14] and in the Indian Ocean.[3]

Boats played an important role in the commerce between the Indus Valley Civilization and Mesopotamia.[15] Evidence of varying models of boats has also been discovered at various Indus Valley archaeological sites.[16][17] Uru craft originate in Beypore, a village in south Calicut, Kerala, in southwestern India. This type of mammoth wooden ship was constructed[when?] using teak, without any iron, and had a transport capacity of 400 tonnes. The ancient Arabs and Greeks used such boats as trading vessels.[citation needed]

The historians Herodotus, Pliny the Elder and Strabo record the use of boats for commerce, travel, and military purposes.[16] 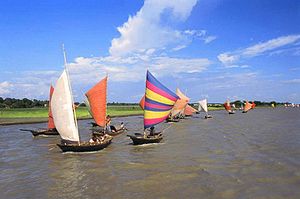 Boats can be categorized into three main types:

For more details on this topic, see Glossary of nautical terms.

Several key components make up the main structure of most boats. The hull is the main structural component of the boat and provides buoyancy. The gunnel, which make up the sides of the boat, offers protection from water and makes the boat harder to sink. The roughly horizontal, chambered structures spanning the hull of the boat are referred to as the deck. A ship often has several decks, but a boat is unlikely to have more than one, if any. Above the deck are the superstructures. The underside of a deck is the deck head.

An enclosed space on a boat is referred to as a cabin. Several structures make up a cabin, including a coach-roof, which is a lightweight structure which spans a raised cabin. The "floor" of a cabin is properly known as the sole, but is more likely to be called the floor (a floor is properly, a structural member which ties a frame to the keelson and keel). The vertical surfaces dividing the internal space are bulkheads.

The keel is a lengthwise structural member to which the frames are fixed (sometimes referred to as a "backbone").

The front (or fore end) of a boat is called the bow. Boats of earlier times often featured a figurehead protruding from the bow. The rear (or aft end) of the boat is called the stern. The right side (facing forward) is starboard and the left side is port.

Nearly every boat is given a name by the owner, and this is how the boat is referred to in the boating community, and in some cases, in legal or title paperwork. Boat names vary from whimsical to humorous to serious.[18]

Until the mid-19th century most boats were made of natural materials, primarily wood, although reed, bark and animal skins were also used. Early boats include the bound-reed style of boat seen in Ancient Egypt, the birch bark canoe, the animal hide-covered kayak and coracle and the dugout canoe made from a single log. 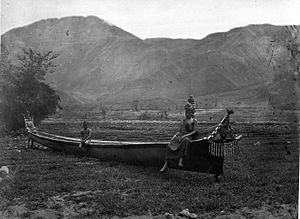 Bill Streever describes a boat made by the native Inupiat people in Barrow, Alaska as "a skin boat, an umiaq, built from the stitched hides of bearded seals and used to hunt bowhead whales in the open-water leads during spring...".[19]

By the mid-19th century, many boats had been built with iron or steel frames but still planked in wood. In 1855 ferro-cement boat construction was patented by the French, who coined the name "ferciment". This is a system by which a steel or iron wire framework is built in the shape of a boat's hull and covered (trowelled) over with cement. Reinforced with bulkheads and other internal structure, it is strong but heavy, easily repaired, and, if sealed properly, will not leak or corrode. These materials and methods were copied all over the world and have faded in and out of popularity to the present time. As the forests of Britain and Europe continued to be over-harvested to supply the keels of larger wooden boats, and the Bessemer process (patented in 1855) cheapened the cost of steel, steel ships and boats began to be more common. By the 1930s boats built entirely of steel from frames to plating were seen replacing wooden boats in many industrial uses, also for fishing fleets. Private recreational boats of steel are however uncommon. In the mid-20th century aluminium gained popularity. Though much more expensive than steel, there are now aluminium alloys available that do not corrode in salt water, and an aluminium boat built to similar load carrying standards is lighter in weight than the steel equivalent . Around the mid-1960s, boats made of glass-reinforced plastic, more commonly known as fibreglass, became popular, especially for recreational boats. The United States Coast Guard refers to such boats as 'FRP' (for fibre-reinforced plastic) boats.

Fibreglass boats are strong, and do not rust (iron oxide), corrode, or rot. They are, however susceptible to structural degradation from sunlight and extremes in temperature over their lifespan. Fibreglass provides structural strength, especially when long woven strands are laid, sometimes from bow to stern, and then soaked in epoxy or polyester resin to form the hull. Whether hand laid or built in a mould, Fibre-reinforced plastic (FRP) boats usually have an outer coating of gelcoat, which is a thin solid colored layer of polyester resin that adds no structural strength, but does create a smooth surface which can be buffed to a high shine and also acts as a protective layer against sunlight. FRP structures can be made stiffer with sandwich panels, where the FRP encloses a lightweight core such as balsa or foam. Cored FRP is most often found in decking, which helps keep down weight that will be carried above the waterline. The addition of wood makes the cored structure of the boat susceptible to rotting, which puts a greater emphasis on not allowing damaged sandwich structures to go unrepaired. Plastic based foam cores are less vulnerable. The phrase 'advanced composites' in FRP construction may indicate the addition of carbon fibre, Kevlar or other similar materials, but it may also indicate methods designed to introduce less expensive and, by at least one yacht surveyor's eyewitness accounts,[20] less structurally sound materials.

Cold moulding is similar to FRP in as much as it involves the use of epoxy or polyester resins, but the structural component is wood instead of fibreglass. In cold moulding very thin strips of wood are layered over a form or mould. Each layer is coated with resin and another directionally alternating layer is laid on top. In some processes the subsequent layers are stapled or otherwise mechanically fastened to the previous layers, but in other processes the layers are weighted or even vacuum bagged to hold them together while the resin sets. Layers are built up until the required hull thickness is achieved.

Boats or watercraft have also been made of materials such as foam or plastic, but most homebuilts today are built of plywood and either painted or covered with a layer of fibreglass and resin.

The most common means of boat propulsion are:

An early, uncommon means of boat propulsion is represented by the water caterpillar. This boat was moved by a series of paddles on chains along the bottom to propel it over the water and preceded the development of tracked vehicles.[21]

A floating boat displaces its weight in water. The material of the boat hull may be denser than water, but if this is the case then it forms only the outer layer. If the boat floats, the mass of the boat (plus contents) as a whole divided by the volume below the waterline is equal to the density of water (1 kg/l). If weight is added to the boat, the volume below the waterline will increase to keep the weight balance equal, and so the boat sinks a little to compensate.