Robert Marvin Hull, OC (born January 3, 1939) is a Canadian former ice hockey player who is regarded as one of the greatest players of all time. His blonde hair, end to end rushes, his incredible speed on skates, and being able to shoot the puck at very high velocity, all earned him the nickname "The Golden Jet". His talents were such that often one or two opposing players were assigned just to shadow him—a tribute to his explosiveness.

In his 23 years in the National Hockey League and World Hockey Association, Hull played for the Chicago Blackhawks, Winnipeg Jets, and Hartford Whalers. He won the Hart Memorial Trophy twice and the Art Ross Trophy three times, and he helped the Blackhawks win the Stanley Cup in 1961 as well as leading the WHA's Winnipeg Jets to Avco Cup championships in 1976, 1978, and 1979. He was elected to the Hockey Hall of Fame in 1983, and the Ontario Sports Hall of Fame in 1997.[1]

Hull was born in Pointe Anne (now part of Belleville), Ontario. He played his minor hockey in Belleville, and then Jr. "B" hockey for the Woodstock Warriors in the fall of 1954. Although the Sarnia Legionnaires and the Waterloo Siskins were the Jr. "B" powerhouses of the 1950s, Hull threw a wrench into their domination, leading the Warriors to the 1955 Sutherland Cup as all-Ontario champions. Later, he played for the Galt Black Hawks and the St. Catharines Teepees in the Ontario Hockey Association, before joining the Chicago Blackhawks in 1957 at the age of 18.

Hull quickly blossomed into a star, finishing second in the rookie of the year balloting his first season. Hull originally wore numbers 16 and 7 as a Blackhawk but later switched to his famous number 9, a tribute to his childhood idol Gordie Howe. By his third season, he led the league in goal- and point-scoring. He went on to lead the Chicago Black Hawks to the Stanley Cup in 1961—their third overall and first in 23 years.

On March 12, 1966, he became the first NHL player to score more than 50 goals in a season, surpassing Maurice Richard's and Bernie Geoffrion's hallowed mark of 50 goals. His 51st goal against the New York Rangers earned him a seven-minute standing ovation from the Chicago Stadium faithful. Hull eventually scored 54 goals that season, the highest single season total of the Original Six era. He led the league in goal scoring seven times during the 1960s. Despite Hull breaking his own record by four goals in 1968–69, the Hawks missed the playoffs for the first time since his rookie season. By his final NHL season, he had scored 50 goals or more a remarkable five times. This was only one time less than all other players in NHL history combined up until that point in time.

Long unhappy because of his relatively poor salary in the period when he was hockey's preeminent superstar, Hull responded to overtures from the upstart World Hockey Association's Winnipeg Jets in 1972 by jesting that he would jump to them for a million dollars, a sum then considered absurd. Gathering the other league owners together to contribute to the unprecedented amount on the grounds that inking such a major star gave instant credibility to the new rival league that was competing directly against the entrenched NHL, Jets' owner Ben Hatskin agreed to the sum, and signed Hull as a player/coach for a contract worth $1.75 million over 10 years plus a $1 million signing bonus. Although his debut with Winnipeg was held up in litigation by the NHL, Hull instantly became the WHA's greatest star, and with Swedish linemates Anders Hedberg and Ulf Nilsson formed one of the most formidable forward lines of the 1970s (known as "The Hot Line"), leading the Jets to two AVCO Cups during his time with the club. His best performance was during the 1974-75 season, when he scored 77 goals to set a new professional mark.

Because he joined the rival league, Hull was not allowed to represent Team Canada in the 1972 Summit Series, which pitted Canada's top NHL players against the USSR's national team. Two years later, a second Summit Series was played and Hull joined many WHA stars (including Gordie Howe, who had been retired from the NHL at the time of the initial Summit Series) in a second series against the Soviet national team. The WHA lost the series four games to one (three ending in a tie), despite Hull's seven goals. He was a key member of the Canadian squad that won the 1976 Canada Cup, though, scoring five goals in seven games.

Hull and teammate Stan Mikita were catalysts for a 1960s craze where players curved the blades of their hockey sticks, which became widely referred to as "banana blades".[4] Hull is the player typically linked most to the rule that banned this practice because of the potential danger to goalies, who did not wear masks in that era.[4] The curved blade made the puck's trajectory unpredictable. The rule originally limited the blade curvature to between one-half and three quarters of an inch; in 1970, it was set at one-half-inch.[4] 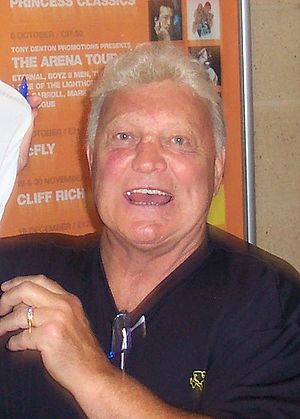 Slowed by injuries and age, Hull played only a few games in the WHA's final season of 1979. However, after the 1979 merger of the two leagues (including the Jets) and reportedly in financial straits, Hull came out of retirement to play once more for the NHL Jets. He played in eighteen games before being traded to the Hartford Whalers for future considerations, and played effectively in nine games and three playoff games before retiring once more to care for his partner who had been injured in an automobile accident.[5]

In September 1981, Hull attempted one final comeback with the New York Rangers at age 42. However, it was a very brief attempt that only lasted five exhibition games before Hull and the Rangers both decided it was best to end the comeback. Hull had one goal, and one assist in those five games. It was the second time in Hull's career that he had played exhibition games with the Rangers; in 1959, after missing the playoffs the previous spring, the Rangers and the Boston Bruins had been sent on an exhibition tour of Europe, and then-emerging star Hull and Eddie Shack were added to the Rangers' roster for the tour. Hull and Shack co-led the Rangers in scoring, each netting 14 goals over the 23-game tour.[6]

In 1978, he was made an Officer of the Order of Canada. Beside his Hall of Fame induction, Hull's No. 9 jersey has been retired both by the Blackhawks and the Jets (and is still honored by the Jets' successor team, the Phoenix Coyotes. When Bobby's son Brett Hull joined the Coyotes, they unretired the number for Brett to wear during his brief stint there to honor his father.) Evander Kane, who wore number 9 for the current Winnipeg Jets franchise, sought and received Hull's permission to wear the number.

In 1998, Hull got involved in a controversy with the Russian media when he allegedly made pro-Nazi comments. According to the Associated Press he was quoted as saying, "Hitler, for example, had some good ideas. He just went a little bit too far."[7] He later claimed the interviewer misunderstood him in the translation. The incident was satirized by the Canadian mock news show This Hour Has 22 Minutes. Host Rick Mercer read a spot saying Hull has been misquoted, that he had actually said, "Sittler had some good ideas." The reference was to former National Hockey League star Darryl Sittler.

In 2003, he was named the figurehead commissioner of a new World Hockey Association, intended to operate during the NHL lockout in 2004–05; it never entered play, and the organization subsequently ran several ephemeral low-minor league and unsanctioned Tier II junior leagues. He currently serves as an ambassador for the Blackhawks' organization.

Hull's younger brother Dennis (nicknamed "the Silver Jet") starred alongside him with the Chicago Black Hawks for eight seasons, scoring over 300 goals in his own right. Some commentators often wondered which brother had the harder shot. When Bobby was excluded from the 1972 Summit Series because he played in the WHA, Dennis initially planned to boycott the event as well as a show of support for his brother, but Bobby persuaded him to stay on Team Canada.

Hull's third youngest son, Brett Hull (the "Golden Brett"), was a more glittering star yet, finishing his own illustrious career with the third-highest goal total in NHL history. Bobby and Brett are the only father-and-son tandem to achieve the marks of more than 50 goals in a NHL season and more than 600 NHL goals. They are also the only father-and-son tandem to win the Hart Trophy and Lady Byng Trophy. While playing for the Phoenix Coyotes (formerly the Winnipeg Jets) in 2005, Brett donned his father's retired No. 9 for the last five games of his career.

Hull's other sons were Bobby Jr., Blake, and Bart. Bart Hull was a standout running back for the Boise State University Broncos football team in the late eighties and 1990, and played with the Ottawa Rough Riders and Saskatchewan Roughriders in the CFL as well as one season of professional indoor football prior to recurring injuries. Post football, he briefly played professional hockey with the Idaho Steelheads.

Bobby Jr. and Blake both played junior and senior hockey. Bobby won the Memorial Cup with the 1980 Cornwall Royals. Later, they played together for the Allan Cup-winning Brantford Mott's Clamatos of the OHA Senior A Hockey League (AAA Men's Amateur) in 1987. Bobby Jr. also possessed a powerful shot, but lacked the scoring touch of his father and brother Brett.

Hull's daughter, Michelle, was an accomplished figure skater, becoming British Columbia Pre-Novice Champion at the age of 11. After many knee injuries, she concentrated on her schooling and is now an attorney licensed in two states.

Hull was romantically involved with a woman named Claudia Allen. In 1980, Hull retired from the Hartford Whalers to take care of Allen, who was injured in a severe automobile accident. In July 1981 Allen gave birth to Hull's youngest daughter, Jessica. The couple never married and around 1983 the couple parted ways. Jessica graduated from Benedictine College with a degree in Elementary Education and currently resides in California.

Hull's marriage to Joanne McKay ended in divorce in 1980 after several abusive incidents. In 1986, he was accused by Deborah, his third wife, of assault and battery. She eventually dropped the charges.[8]