From Infogalactic: the planetary knowledge core
Jump to: navigation, search
For other uses, see Bocage (disambiguation).

Bocage of the Boulonnais, Boulogne-sur-Mer, France

Bocage (/ˈboʊkɔːʒ/ BOH-kawzh) is a terrain of mixed woodland and pasture. 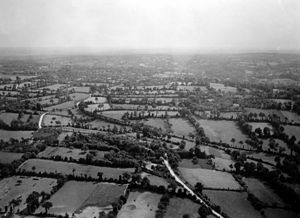 Bocage country on the Cotentin Peninsula, Lower Normandy
File:Bocagenormandy.jpg
Location of bocage (in the context of Operation Overlord)

Bocage is a Norman word that comes from the Old Norman boscage (Anglo-Norman boscage, Old French boschage), from the Old French root bosc ("wood") > Modern French bois ("wood") cf. Medieval Latin boscus (first mentioned in 704 AD).[1] The Norman place names retain it as Bosc-, -bosc, Bosc-, pronounced traditionally [bɔk] or [bo]. The suffix -age means "a general thing". The boscage form was used in English for leafy decoration such as is found on eighteenth-century porcelain. Similar words occur in Scandinavian (cf. Swedish buskage) and other Germanic languages (cf. Dutch bos, boshaag); the original root is thought to be the Proto-Germanic *bŏsk-. The boscage form seems to have developed its meaning under the influence of eighteenth-century romanticism.

In English bocage refers to a terrain of mixed woodland and pasture, with fields and winding country lanes sunken between narrow low ridges and banks surmounted by tall thick hedgerows that break the wind but also limit visibility. It is the sort of landscape found in England in Devon.

The 1934 Nouveau Petit Larousse defined bocage as 'a bosquet, a little wood, an agreeably shady wood' and a bosquet as a little wood, a clump of trees'. By 2006, the Petit Larousse definition had become '(Norman word) Region where the fields and meadows are enclosed by earth banks carrying hedges or rows of trees and where the habitation is generally dispersed in farms and hamlets.'

Bocage may also refer to a small forest, a decorative element of leaves, or a type of rubble-work, comparable with the English use of "rustic" in relation to garden ornamentation.

In Southeast England, in spite of a sedimentary soil which would not fit this landscape, a bocage resulted from the movement of the enclosure of the open fields.

England developed in the 17th century an ambitious sea policy. It imported Russian wheat, cheaper than English wheat. The enclosures favoured sheep husbandry and limited English cereal production. As a consequence of this policy, the rural exodus was amplified, accelerating the Industrial Revolution. The surplus of agricultural workers migrated to the cities to work in factories.

In Normandy, the bocage acquired a particular significance in the Chouannerie[2] and during the Battle of Normandy, as it made progress against the German defenders difficult.[3] In response, the Rhino tank was developed; a modification added to the front of tanks to aid them cut a hole through the bocage. American personnel usually referred to bocage as hedgerows. The German army also used sunken lanes to implement strong points and defenses to stop the American troops on the Cotentin peninsula and around the town of Saint-Lô.[4]