From Infogalactic: the planetary knowledge core
Jump to: navigation, search
This article is about the Biblical phrase. For the Christian feast, see Corpus Christi (feast). 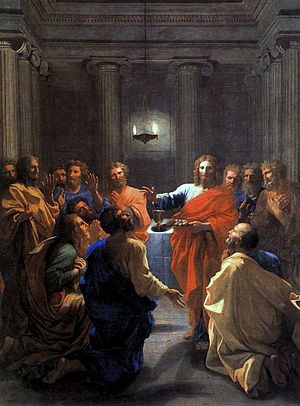 The Institution of the Eucharist by Nicolas Poussin, 1640

In Christian theology, the term Body of Christ has two separate connotations: it may refer to Jesus' statement about the Eucharist at the Last Supper that "This is my body" in Luke 22:19-20, or the explicit usage of the term by the Apostle Paul in I Corinthians to refer to the Christian Church.

Although in general usage the term "Body of Christ" may refer to Christ's body in the spiritual realm, the other two distinct usages are prominent theological issues. For some Christians, such as Roman Catholics, the term may refer to the real presence of Christ in the Eucharist. For a larger segment of Christians, including Catholics and some Protestants, it may instead or also refer to the Christian Church as a group of believers, as used in the Pauline epistles. The use of the phrase "mystical body" emphasizes the spiritual essence or sacramental character that characterizes the group of believers.[1]

The Eucharist and Real Presence

While teaching that in the bread consecrated in the Eucharist there is absolutely no change open to the senses or to scientific investigation, the Catholic Church supports the Real Presence, i.e. that the reality of the bread is changed into that of the body of Christ. The Church teachings refer to this change as one of the "substance" or "transubstantiation".[2] It rejects the term "consubstantiation", which suggests that the substance or reality of the bread remains after the consecration, instead of being converted or changed into that of the body of Christ. At the same time, the Church holds that all that can be examined either directly or by scientific investigation — what in philosophy are called the "accidents" (as opposed to the reality) - remains quite unchanged.

In the Roman Rite, the priest or other minister who gives the consecrated host to a communicant says: "The body of Christ", indicating what is held to be the reality of what is given.

Since the consecrated bread is believed to be the body of Christ and sacred, what remains of the host after celebration of Mass is kept in the church tabernacle. This is primarily for the purpose of taking Communion to the sick, but also to serve as a focal point for private devotion and prayer. On appropriate occasions, there may be public Eucharistic adoration.

The Eastern Orthodox Church also believes that the Eucharistic elements of bread and wine become the actual body and blood of Christ. It has authoritatively used the term "Transubstantiation" to describe this change, as in The Longer Catechism of The Orthodox, Catholic, Eastern Church[3] and in the decrees of the 1672 Synod of Jerusalem.[4]

Historically, various Protestant theologians expressed different opinions regarding the Eucharist and the body of Christ. In contrast to Zwingli, Martin Luther reasoned that because divinity involves omnipresence, the body of Christ can be present in the Eucharist because of its participation in the divine nature.[5] A long debate took place between Luther and Zwingli on the issue of omnipresence, with each providing a variety of theological and biblical arguments to support his view.[6]

In current Lutheran teachings, the Body of Christ is used in a somewhat similar form to the Roman Catholic teachings, but the Lutherans reject the Catholic teaching of transubstantiation. For the Lutheran, the Body of Christ is the formal title of the bread in the Eucharist, as seen in the Lutheran Divine Service. It is also said in the Words of Institution - see Luther's Small Catechism. A similar teaching is taught in various Methodist churches.

John Calvin disagreed with Luther's reasoning about omnipresence and, like Zwingli, argued that human presence requires a specific location.[5] Calvin stated that Christ's body was present in the first Eucharist during the Last Supper, but was thereafter in heaven.[5][7] Melanchton was accused of supporting Calvin, and the debates between the various groups eventually caused a further rift between the followers of Luther and Zwingli.[7]

For as the body is one, and hath many members, and all the members of that one body, being many, are one body: so also is Christ. For by one Spirit are we all baptized into one body, whether we be Jews or Gentiles, whether we be bond or free; and have been all made to drink into one Spirit. For the body is not one member, but many. — 1 Corinthians 12:12-14

The first meaning that Catholics attach to the expression "Body of Christ" is the Catholic Church. The Catechism of the Catholic Church quotes with approval, as "summing up the faith of the holy doctors and the good sense of the believer", the reply of Saint Joan of Arc to her judges: "About Jesus Christ and the Church, I simply know they're just one thing, and we shouldn't complicate the matter."[8] In the same passage, it also quotes Saint Augustine: "Let us rejoice then and give thanks that we have become not only Christians, but Christ himself. Do you understand and grasp, brethren, God's grace toward us? Marvel and rejoice: we have become Christ. For if he is the head, we are the members; he and we together are the whole man.... the fullness of Christ then is the head and the members. But what does 'head and members' mean? Christ and the Church." In light of all this, the Catholic Church calls itself the "universal sacrament of salvation" for the whole world, as it dispenses the sacraments, which give the grace of Christ himself to the recipient.

Saint Paul the Apostle spoke of this unity of Christians with Christ, referred to in the New Testament also in images such as that of the vine and the branches,[9] in terms of a single body that has Christ as its head in Romans 12:5,1 Corinthians 12:12-27, Ephesians 3:6 and 5:23, Colossians 1:18 and 1:24.

According to the Catechism of the Catholic Church, "the comparison of the Church with the body casts light on the intimate bond between Christ and his Church. Not only is she gathered around him; she is united in him, in his body. Three aspects of the Church as the Body of Christ are to be more specifically noted: the unity of all her members with each other as a result of their union with Christ; Christ as head of the Body; and the Church as bride of Christ."[10] The Catechism spells out the significance of each of these three aspects.

To distinguish the Body of Christ in this sense from his physical body, the term "Mystical Body of Christ" is often used. This term was used as the first words, and so as the title, of the encyclical Mystici Corporis Christi of Pope Pius XII. In that document, Pope Pius XII in 1943 states, "the mystical Body of Christ... is the Catholic Church." But in 1964 the Catholic bishops gathered at the Second Vatican Council, while acknowledging that “full incorporation” in the Church required union with the Sovereign Pontiff, described various degrees of being “conjoined” or “related” to the Church including all persons of good will,[11] which was not something new.[12] Following this understanding, Karl Rahner coined the term “anonymous Christians”.[13]

The Orthodox see the description of the Church (Ecclessia) as the "Body of Christ" as being inextricably connected to Holy Communion. According to St. Ignatius of Antioch (c. 35-107), the unity of the Church is expressed in Eucharistic terms. Just as there are many offerings made throughout the world on any given day, and yet all partake of one and the same Body of Christ, so the Church, though existing in many separate localities, is only one.

In modern teachings, the "Body of Christ" is used by other Protestants to collectively describe believers in Christ, as opposed to only those who are members of the Catholic Church. In this sense, Christians are members of the universal body of Christ not because of identification with the institution of the Church, but through identification with Christ directly through faith. This theology is based on several passages in the Bible, including Romans 12:5,1 Corinthians 12:12-27, Ephesians 3:6 and 5:23, Colossians 1:18 and Colossians 1:24. Jesus Christ is seen as the "head" of the body, which is the church, while the "members" of the body are seen as members of the Church. In this way, Protestantism defines the "Body of Christ" in a much broader way than does the Catholic Church. This has allowed for a broad base within Christianity to call themselves part of the "Body of Christ."