From Infogalactic: the planetary knowledge core
(Redirected from Boeing 314)
Jump to: navigation, search

The Boeing 314 Clipper was a long-range flying boat produced by the Boeing Airplane Company between 1938 and 1941. One of the largest aircraft of the time, it used the massive wing of Boeing’s earlier XB-15 bomber prototype to achieve the range necessary for flights across the Atlantic and Pacific Oceans. Twelve Clippers were built; nine were brought into service for Pan Am and later transferred to the U.S. military.[2] The remaining three were sold to British Overseas Airways Corporation (BOAC) by Pan Am and delivered in early 1941. (BOAC's 3 Short S.26 transoceanic flying-boats had been requisitioned by the RAF). 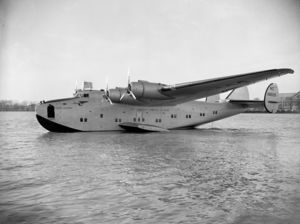 The huge flying boat was assembled at Boeing's Plant 1 on the Duwamish River in Seattle, and towed to Elliott Bay for taxi and flight tests. The first flight was on June 7, 1938, piloted by Edmund T. "Eddie" Allen. At first the aircraft had a single vertical tail, and Allen found he had inadequate directional control. The aircraft returned to the factory and was fitted with the endplates on the ends of the horizontal tail in place of the single vertical fin. This too was found to be lacking and finally the centerline vertical fin was restored, after which the aircraft flew satisfactorily.[4]

The 314 used a series of heavy ribs and spars to create a robust fuselage and cantilevered wing, obviating the need for external drag-inducing struts to brace the wings. Boeing also incorporated Dornier-style sponsons into the hull structure.[5] The sponsons, broad lateral extensions at the waterline on both sides of the hull, served several purposes: they provided a wide platform to stabilize the craft while floating on water, they acted as an entryway for passengers boarding the flying boat and they were shaped to contribute additional lift in flight. Passengers and their baggage were weighed, with each passenger allowed up to 77 pounds (35 kg) free baggage allowance (in the later 314 series) but then charged $3.25 per lb ($7.15/kg) for exceeding the limit.[6] To fly the long ranges needed for trans-Pacific service, the 314 carried 4,246 US gallons (16,070 l; 3,536 imp gal) of gasoline. The later 314A model carried a further 1,200 US gallons (4,500 l; 1,000 imp gal). A capacity of 300 US gallons (1,100 l; 250 imp gal) of oil was required for operation of the radial engines. 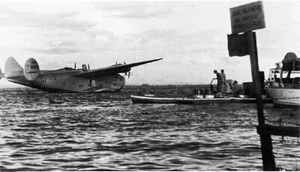 The California Clipper at Cavite, the Philippines, 1940

Pan Am's "Clippers" were built for "one-class" luxury air travel, a necessity given the long duration of transoceanic flights. The seats could be converted into 36 bunks for overnight accommodation; with a cruising speed of 188 miles per hour (303 km/h) (typically flights at maximum gross weight were flown at 155 miles per hour (249 km/h)) in 1940 Pan Am's schedule San Francisco to Honolulu was 19 hours. The 314s had a lounge and dining area, and the galleys were crewed by chefs from four-star hotels. Men and women were provided with separate dressing rooms, and white-coated stewards served five and six-course meals with gleaming silver service. The standard of luxury on Pan American's Boeing 314s has rarely been matched on heavier-than-air transport since then; they were a form of travel for the super-rich, priced at $675 return from New York to Southampton (comparable to a round trip aboard Concorde in 2006).[7] Most of the flights were transpacific, with a one-way ticket from San Francisco to Hong Kong via the "stepping-stone" islands posted at $760 (or $1,368 round-trip).[8] The Pan Am Boeing 314 Clippers brought exotic destinations like the Far East within reach of air travelers and came to represent the romance of flight. Transatlantic flights to neutral Lisbon and Éire (Ireland) continued after war broke out in Europe in September 1939 (and until 1945), but military passengers and cargoes necessarily got priority, and the service was more spartan.

Equally critical to the 314's success was the proficiency of its Pan Am flight crews, who were extremely skilled at long-distance, over-water flight operations and navigation. For training, many of the transpacific flights carried a second crew.[9] Only the very best and most experienced flight crews were assigned Boeing 314 flying boat duty. Before coming aboard, all Pan Am captains as well as first and second officers had thousands of hours of flight time in other seaplanes and flying boats. Rigorous training in dead reckoning, timed turns, judging drift from sea current, astral navigation, and radio navigation were conducted. In conditions of poor or no visibility, pilots sometimes made successful landings at fogged-in harbors by landing out to sea, then taxiing the 314 into port.[10] 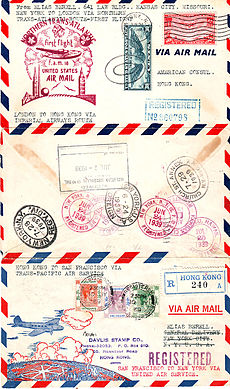 At the outbreak of the war in the Pacific, the Pacific Clipper was en route to New Zealand. Rather than risk flying back to Honolulu and being shot down by Japanese fighters, it was decided to fly west to New York. Starting on December 8, 1941 at Auckland, New Zealand, the Pacific Clipper covered over 31,500 miles (50,694 km) via such exotic locales as Surabaya, Karachi, Bahrain, Khartoum and Leopoldville. The Pacific Clipper landed at Pan American's LaGuardia Field seaplane base at 7:12 on the morning of January 6, 1942.

The Yankee Clipper flew across the Atlantic on a route from Southampton to Port Washington, New York with intermediate stops at Foynes, Ireland, Botwood, Newfoundland, and Shediac, New Brunswick. The inaugural trip occurred on June 24, 1939.

The Clipper fleet was pressed into military service during World War II, and the flying boats were used for ferrying personnel and equipment to the European and Pacific fronts. The aircraft were purchased by the War and Navy Departments and leased back to Pan Am for a dollar, with the understanding that all would be operated by the Navy once four-engined replacements for the Army's four Clippers were in service. Only the markings on the aircraft changed: the Clippers continued to be flown by their experienced Pan Am civilian crews. American military cargo was carried via Natal, Brazil to Liberia, to supply the British forces at Cairo and even the Russians, via Teheran. The Model 314 was then the only aircraft in the world that could make the 2,150-statute-mile (3,460 km) crossing over water,[13] and was given the military designation C-98. Since the Pan Am pilots and crews had extensive expertise in using flying boats for extreme long-distance over-water flights, the company's pilots and navigators continued to serve as flight crew. In 1943, President Franklin D. Roosevelt traveled to the Casablanca Conference in a Pan-Am crewed Boeing 314 Dixie Clipper.[2]

The success of the six initial Clippers had led Pan Am to place an order for six improved 314A models to be delivered in 1941, with the goal of doubling the service on both Atlantic and Pacific routes. However, the fall of France in 1940 caused some doubt about whether the Atlantic service could continue; passenger numbers were already reduced due to the war, and if Spain or Portugal was to join the Axis, then the flights to Lisbon would be forced to stop. Pan Am began to consider reducing their order and, in August 1940, reached an agreement to sell three of the six under construction to the United Kingdom. The aircraft were to be operated by the British Overseas Airways Corporation and were primarily intended for the UK - West Africa route, as existing flying boats could not travel this route without stopping in Lisbon. The sale made a small net profit for Pan Am - priced at cost plus 5% - and provided a vital communications link for Britain, but was politically controversial. In order to arrange the sale, the junior minister Harold Balfour had to agree to the contract with no government approval, leading to stern disapproval from Winston Churchill and lengthy debate by the Cabinet over the propriety of the purchase.[14] Churchill later flew on the Bristol and Berwick,[2] which he praised intensely,[14] adding to the Clippers’ fame during the war.[15]

After the war, several Clippers were returned to Pan American hands. However, even before hostilities had ended, the Clipper had become obsolete. The flying boat's advantage had been that it didn't require long concrete runways, but during the war a great many such runways were built for heavy bombers.[2] New long-range airliners such as the Lockheed Constellation and Douglas DC-4 were developed. The new landplanes were relatively easy to fly, and did not require the extensive pilot training programs mandated for seaplane operations. One of the 314's most experienced pilots said, "We were indeed glad to change to DC-4s, and I argued daily for eliminating all flying boats. The landplanes were much safer. No one in the operations department... had any idea of the hazards of flying boat operations. The main problem now was lack of the very high level of experience and competence required of seaplane pilots".[16] 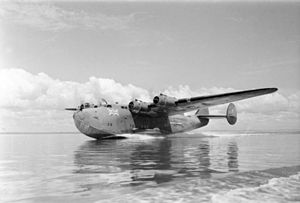 The last Pan Am 314 to be retired, the California Clipper NC18602, in 1946, had accumulated more than a million flight miles.[17] Of the 12 Boeing 314 Clippers built three were lost to accidents, although only one of those resulted in fatalities: 24 passengers and crew aboard the Yankee Clipper NC18603 lost their lives in a landing accident at Cabo Ruivo Seaplane Base, in Lisbon, Portugal on February 22, 1943. Among that flight's passengers were prominent American author and war correspondent Benjamin Robertson, who was killed, and the American singer and film/TV actress Jane Froman, who was seriously injured.[18]

Pan-Am's 314 was removed from scheduled service in 1946 and the seven serviceable B-314s were purchased by the start-up airline New World Airways. These sat at San Diego's Lindbergh Field for a long time before all were eventually sold for scrap in 1950. The last of the fleet, the Anzac Clipper NC18611(A), was resold and scrapped at Baltimore, Maryland in late 1951.

BOAC's 314As were withdrawn from the Baltimore-to-Bermuda route in January 1948, replaced by Lockheed Constellations flying from New York and Baltimore to Bermuda.[19]

None of the dozen 314s built between 1939 and 1941 survived beyond 1951, with all 12 being scrapped, scuttled, cannibalized for parts, or otherwise written off. Underwater Admiralty Sciences, a non-profit oceanographic exploration and science research organization based in Kirkland, Washington, announced in 2005, at the 70th Anniversary of the first China Clipper flight in San Francisco, its plans to survey, photograph, and possibly recover the remains of the hulls of two sunken 314s: NC18601 (Honolulu Clipper), scuttled in the Pacific Ocean in 1945; and NC18612 (Bermuda Sky Queen, formerly Cape Town Clipper), sunk in the Atlantic by the Coast Guard in 1947. UAS has also spent significant time at Pan Am reunions and with individual crewmembers and employees of Pan Am conducting videotaped interviews for the mission's companion documentary.[24][25] However, as of 2014, no search or recovery had been attempted, with the most recent news from 2011 suggesting that the company was still in need of at least US$8 million to get the plan underway.[26]

There is a life-size 314 mockup at the Foynes Flying Boat Museum, Foynes, County Limerick, Ireland. The museum is at the site of the original transatlantic flying-boat terminus.[27] 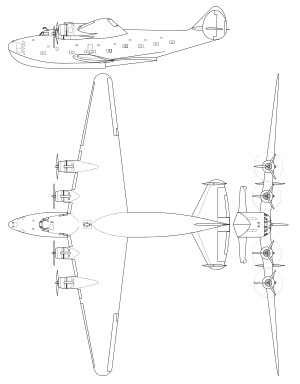 The 314 has been featured many times in pop culture, including several novels. The 1940 Alfred Hitchcock film Foreign Correspondent features the 314 in a pivotal in-flight disaster. The best-known example, in the film Raiders of the Lost Ark, actually used a Short Solent Mark III made to resemble a 314 by use of matte effects.[29] The 1991 novel Night Over Water by author Ken Follett centers around a 314 flight from Southampton to New York during the outbreak of World War II.