Snoqualmie
Location in the United States 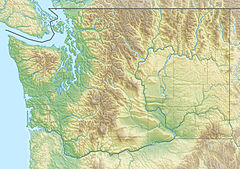 The Boeing Classic is a professional golf tournament on the Champions Tour, founded 17 years ago in 2005. The 54-hole event is played annually in late August in Snoqualmie, Washington, east of Seattle. The tournament was titled the "Boeing Greater Seattle Classic" for its first two years and Boeing is the main sponsor.

The purse for the 2007 tournament was $1.6 million, with $240,000 to the champion, Denis Watson, the winner of a playoff. The seven-man, sudden death playoff was the largest in tour history, with the seven finishing the 54 holes at 207 (−9). The tournament concluded when Watson sunk an eagle putt on the second playoff hole, a second replay of the par-5 18th hole.[2]

The 2009 tournament was held on August 28–30 with a $1.8 million purse. Second-round co-leader Loren Roberts birdied the final two holes and outlasted Mark O'Meara by nearly matching his sterling tee shot at 17 and dribbled in a 5-foot (1.6 m) birdie putt. Roberts birdied the uphill par-5 final hole with a short pitch shot to 3 feet (0.9 m) and dropped the putt for his third victory of the season. Roberts shot a 7-under 65 in the final round and set a new tournament record at 18 under.[5]

In 2010, the U.S. Senior Open was held at Sahalee Country Club in nearby Sammamish, and won by Bernhard Langer with a final score of 272 (−8). The Boeing Classic was held four weeks after on August 27–29, also won by Langer by three strokes over Nick Price of Zimbabwe. Langer tied the record set the previous year by Roberts at 198 (−18).[6]

One player has won this tournament more than once through 2014.