The Boeing EC-135 was a command and control version of the C-135 Stratolifter. Modified for Operation Looking Glass mission, during the Cold War, EC-135 were airborne 24 hours a day to serve as flying command platforms for the military in the event of nuclear war. EC-135N served as tracking aircraft for the Apollo space program.

During the early 1960s, NASA and the Department of Defense (DoD) needed a very mobile tracking and telemetry platform to support the Apollo space program and other unmanned space flight operations. In a joint project, NASA and the DoD contracted with the McDonnell Douglas and the Bendix Corporations to modify eight Boeing C-135 Stratolifter cargo aircraft into EC-135N Apollo / Range Instrumentation Aircraft (A/RIA). Equipped with a steerable seven-foot antenna dish in its distinctive "Droop Snoot" or "Snoopy Nose", the EC-135N A/RIA became operational in January 1968, and was often known as the "Jimmy Durante" of the Air Force. The Air Force Eastern Test Range (AFETR) at Patrick AFB, Florida, maintained and operated the A/RIA until the end of the Apollo program in 1972, when the USAF renamed it the Advanced Range Instrumentation Aircraft (ARIA).

Since Patrick AFB was located, literally, on the Atlantic Ocean, salt water and salt air-induced corrosion issues and associated aircraft maintenance challenges were problematic for the ARIA while based there. Transferred to the 4950th Test Wing at Wright-Patterson AFB, Ohio, in December 1975 as part of an overall consolidation of large test and evaluation aircraft, the ARIA fleet underwent numerous conversions, including a re-engining that changed the EC-135N to the EC-135E. In 1994, the ARIA fleet relocated again to Edwards AFB, California, as part of the 412th Test Wing. However, taskings for the ARIA dwindled because of high costs and improved satellite technology, and the USAF transferred the aircraft to other programs such as E-8 J-STARS. 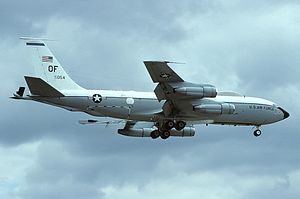 The U.S. nuclear strategy depends on its ability to command, control, and communicate with its nuclear forces under all conditions. An essential element of that ability is Looking Glass; its crew and staff ensure there is always an aircraft ready to direct bombers and missiles from the air should ground-based command centers be destroyed or rendered inoperable. Looking Glass is intended to guarantee that U.S. strategic forces will act only in the manner dictated by the President. It took the nickname "Looking Glass" because the mission mirrored ground-based command, control, and communications. Besides being the program name, "Looking Glass" is the official name for the "C" model aircraft of the EC-135. It has a crew of at least 15, including at least one or more general officers.

The Strategic Air Command (SAC) began the Looking Glass mission on February 3, 1961 and Looking Glass aircraft were continuously airborne 24 hours a day for over 29 years, accumulating more than 281,000 accident-free flying hours. On July 24, 1990, "The Glass" ceased continuous airborne alert, but remained on ground or airborne alert 24 hours a day. The EC-135A flew the Command Post mission until EC-135C were delivered starting in 1963. The aircraft were delivered to Offutt AFB and as well as one aircraft to each of the Stateside Numbered Air Force Headquarters - Second Air Force at Barksdale AFB, LA; Eighth Air Force at Westover AFB, MA; and Fifteenth Air Force at March AFB CA. EC-135's flew all the missions except one, when an E-4B was tested on an operational mission, flying a double sortie as the replacement aircraft could not launch due to weather. About a week after the flight, Washington deleted the funds for additional E-4 aircraft.

On June 1, 1992, SAC was inactivated and replaced by the United States Strategic Command, which now controls the Looking Glass.[2][3] On October 1, 1998, the Navy's E-6 Mercury TACAMO replaced the USAF's EC-135C in the Looking Glass mission.

Operation Silk Purse program provided four EC-135H command post aircraft to the Commander, U.S. European Command (USEUCOM), which were based at RAF Mildenhall in the United Kingdom. Flown by the 10th Airborne Command and Control Squadron 1970-87. Onboard secure/non-secure communications and avionics equipment was maintained by the 513th Avionics Maintenance Squadron. Aircraft S/Ns 61-0282, 285, 286 and 291.

"Upkeep" was the call sign for the EC135 flying in southeast Asia during 1969 to 1971, based out of Hickam AFB Hawaii. It was under the direction of PACAF of which 5th AF in Fuchu AS, Tokyo Japan handled their voice communications both unsecure and secure. <1956 Comm Gp USAF 1969 to 1971>

Operation Nightwatch provided three EC-135J command post aircraft to the President of the United States which were based at Andrews AFB, MD. All three aircraft were transferred to other ABNCP missions.

Nightwatch was initiated in the mid-1960s utilizing the three EC-135J aircraft, modified from KC-135Bs, as command post aircraft. The three Nightwatch aircraft were ready to fly the President and the National Command Authority (NCA) out of Washington in the event of a nuclear attack. The E-4 aircraft (a modified Boeing 747-200) came on line with the Nightwatch program in 1974 replacing the EC-135s on this mission.[4]

The 310th Airlift Squadron, part of the 6th Air Mobility Wing at MacDill AFB, Florida, operated two NKC-135s that were reconfigured as EC-135Y aircraft from 1989 to 2003 as executive transport and command & control platforms to support the Commander, United States Central Command. These aircraft have since been replaced with three C-37A Gulfstream V aircraft. 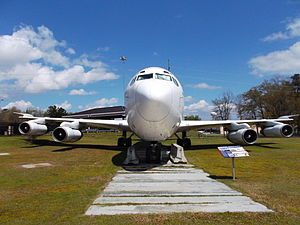 The Boeing EC-135N Stratoliner at the Museum of Aviation at Robins Air Force Base in Warner Robins, Georgia.