From Infogalactic: the planetary knowledge core
(Redirected from Bogeymen)
Jump to: navigation, search
For other uses, see Bogeyman (disambiguation). 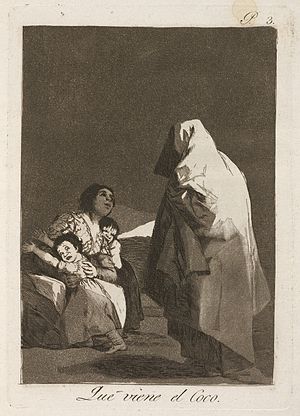 Bogeyman (also spelled bogieman, boogeyman, or boogie man, and pronounced /bʊɡimæn/ or /boʊɡimæn/; see spelling differences)[1] is a common allusion to a mythical creature in many cultures used by adults to frighten children into good behavior. This monster has no specific appearance, and conceptions about it can vary drastically from household to household within the same community; in many cases, he has no set appearance in the mind of an adult or child, but is simply a non-specific embodiment of terror. Parents may tell their children that if they misbehave, the bogeyman will get them. Bogeymen may target a specific mischief—for instance, a bogeyman that punishes children who suck their thumbs—or general misbehaviour, depending on what purpose needs serving. In some cases, the bogeyman is a nickname for the devil. Bogeyman tales vary by region. The bogeyman is usually a masculine entity but can be any gender or simply androgynous.

The word bugbear, from bug + bear, suggests that the bogey eating small children takes on the appearance of a bear.[4] The word bugaboo probably arose as an alteration of bugbear.[5]

In Southeast Asia, the term is popularly supposed to refer to Bugis[6] or Buganese[7] pirates, ruthless seafarers of southern Sulawesi, Indonesia's third-largest island. These pirates often plagued early English and Dutch trading ships of the British East India Company and Dutch East India Company. It is popularly believed that this resulted in the European sailors' bringing their fear of the "bugi men" back to their home countries. However, etymologists disagree with this, because words relating to bogeyman were in common use centuries before European colonization of Southeast Asia and it is therefore unlikely that the Bugis would have been commonly known to westerners during that time.

Analogs in other cultures

Bogeyman-like beings are almost universal, common to the folklore of many countries.

In many countries, a bogeyman variant is portrayed as a man with a sack on his back who carries naughty children away. This is true for many Latin countries, such as Brazil, Portugal, Spain, and the countries of Spanish America, where it is referred to as el "Hombre del costal", el "hombre del saco", or in Portuguese, o "homem do saco" (all of which mean "the sack/bag man"), or el roba-chicos, meaning child-stealer. Similar legends are also very common in Eastern Europe, as well as Haiti and some countries in Asia.

In Spain, parents will sing lullabies or tell rhymes to children, warning them that if they do not sleep, El Coco will come and get them. The rhyme originated in the 17th century has evolved over the years, but still retains its original meaning. Coconuts (Spanish: coco) received that name because their brownish hairy surface reminded Portuguese explorers of coco, a ghost with a pumpkin head. Latin America also has El Coco, although its folklore is usually quite different, commonly mixed with native beliefs, and, because of cultural contacts, sometimes more related to the bogeyman of the United States. However, the term El Coco is also used in Spanish-speaking Latin American countries, such as Bolivia, Colombia, Guatemala, Peru, Mexico, El Salvador, Honduras, the Dominican Republic, and Venezuela, although there it is more usually called El Cuco, as in Puerto Rico, Chile, Uruguay and Argentina. Among Mexican-Americans, El Cucuy is portrayed as an evil monster that hides under children's bed at night and kidnaps or eats the child that does not obey his/her parents or go to sleep when it is time to do so. However, the Spanish American bogeyman does not resemble the shapeless or hairy monster of Spain: social sciences professor Manuel Medrano says popular legend describes El cucuy as a small humanoid with glowing red eyes that hides in closets or under the bed. 'Some lore has him as a kid who was the victim of violence... and now he’s alive, but he’s not,' Medrano said, citing Xavier Garza's 2004 book Creepy Creatures and other Cucuys."[8]

In Brazilian folklore, a similar character called Cuca is depicted as a female humanoid alligator. There's a famous lullaby sung by most parents to their children that says that the Cuca will come and get them if they do not sleep, just as in Spain. The Cuca is also a character of Monteiro Lobato's Sítio do Picapau Amarelo, a series of short novels written for children, which contain a large number of characters from Brazilian folklore.

In the countries of the eastern Mediterranean, children who misbehave are threatened with a creature known as "babau" (or "baubau", "baobao", "bavbav" or similar). In Italy and Romania, the Babau (in Romania, Bau-bau) is also called l'uomo nero (Romanian: omul negru) or "black man". In Italy, he is portrayed as a tall man wearing a heavy black coat, with a black hood or hat which hides his face. Sometimes, parents will knock loudly under the table, pretending that someone is knocking at the door, and saying: "Here comes l'uomo nero! He must know that there's a child here who doesn't want to drink his soup!" L'uomo nero is not supposed to eat or harm children, just take them away to a mysterious and frightening place. A popular lullaby says that he would keep a child with him "for a whole year".[9] In Slovenia, the "Bavbav" is described as a formless spirit. In Greece and Cyprus, the equivalent of the Bogeyman is known as Baboulas (Greek: Μπαμπούλας). Typically, he is said to be hiding under the bed, although the details of his story is adapted by the parents in a variety of ways. In Egypt "al-Bu'bu'" (البعبع) is often depicted as a night creature dressed in black, who haunts children that misbehave.

In Germanic countries, the bogeyman is called the butzemann, busseman, buhman or boeman. In Germany, the bogeyman is known as the "Buhmann" or the Butzemann. The common German expression is "der schwarze Mann" (the black man in English), which refers directly to some inhuman or rather paranormal creature, which carries children away and hides in the dark corners under the bed or in the closet. The figure is part of the children's game "Wer hat Angst vorm schwarzen Mann" (Who is afraid of the boggie-man).

In Denmark, it is known as the bussemand or bøhmand. It hides under the bed and grabs children who will not sleep. Like the English, bussemand is also a slang term for nasal mucus. In Norway, he is referred to as the Busemann. In the Netherlands, the Boeman is portrayed as a creature that resembles a man, dressed completely black, with sharp claws and fangs. He hides under the bed or in the closet. The Bogeyman takes bad children or those that refuse to sleep and locks them in his basement for a period of time.

In the Pennsylvania Dutch dialect, used in those areas of Pennsylvania colonized by Swiss and Germanic peoples during the eighteenth century, "der Butzemann" is the term for a male scarecrow. A female scarecrow is a "Butzefrau". 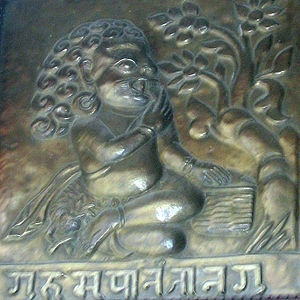 As with many ancient legends, the Bogeyman sees a rekindled popularity in modern media, including those aimed at children. Such revisited modern versions, contributing to the constant evolution of the myth, include those listed below.