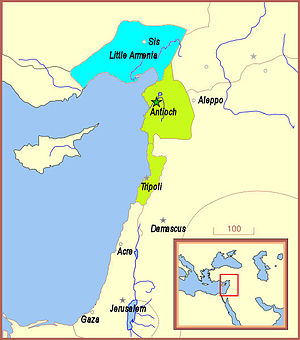 Bohemond IV ruled over Antioch and Tripoli (green), and was in conflict with Cilician Armenia (blue).

Bohemond IV was the son of Bohemond III of Antioch by his first wife Orguilleuse d'Harenc. The first part of his rule was marked by internal dynastic conflicts.

Starting around 1201, a dispute had arisen about the succession of Antioch. Bohemond III had a grandson, Raymond-Roupen of Antioch, from his eldest son Raymond of Antioch, who was considered by many to be the rightful heir to Antioch. Bohemond IV won the title, at the time, and ruled over both Tripoli and Antioch, though their legal and administrative systems remained distinct.[1] However, conflict continued for generations, and involved nobles from Antioch, Tripoli, and Cilician Armenia. Bohemond chose to live in Tripoli, and while he was absent, Antioch became heavily influenced by the Greek communities.

Raymond-Roupen was excluded from the succession, but even so Bohemond IV still lost the principality to his nephew, supported by Leo II of Armenia, between 1216 and 1219.

Bohemond proved to be an erratic ally, changing his vows of fidelity in whichever way he considered the best interest for his principality. An example was first the alliance then desertion of the troops of Frederick II Hohenstaufen, during the Sixth Crusade of 1228/1229. He was also a fierce enemy of the Knights Hospitaller and due to this he was excommunicated in 1230 by Pope Gregory IX.

His first marriage occurred some time before 21 August 1198 to Plaisance Embriaco de Giblet (d. 1217). They had four sons and two daughters:

After the death of his first wife, he married again at Tripoli in January 1218 Melisende de Lusignan (c. 1200 – after 1249), Princess of Cyprus, daughter of Amalric II of Jerusalem and his second wife Isabella of Jerusalem. From this marriage, Bohemond had three daughters: