The Boleyn Ground,[2] often referred to as Upton Park, is an association football stadium located in Upton Park, east London. Since 1904, it has been the home of Premier League side West Ham United F.C., with their predecessors Thames Ironworks playing their home games at Hermit Road. The stadium was also used shortly in the early 1990s by Charlton Athletic during its years of financial difficulty. The current seating capacity of the ground is 35,016.[1]

The club rented Green Street House and grounds in the Municipal Borough of East Ham from the Roman Catholic Church from around 1912.[3][not in citation given] Green Street House was known locally as Boleyn Castle because of its imposing nature and an association with Anne Boleyn, who had either stayed at or, as some believe, owned the house. The ground is said to be haunted by one of her maids who died in childbirth. Hence renting the grounds of "Boleyn Castle" the name Boleyn Ground came into being. Today the ground is far more commonly known as Upton Park, after the Upton Park, London area in which it is located.

In August 1944, a V-1 flying bomb fell on the south-west corner of the pitch. This forced the team to play its games away from home while repairs were undertaken, but it did not affect performances as West Ham managed nine consecutive victories. Upon their return to the ground in December, they lost 1–0 to Tottenham Hotspur. The record attendance is 42,322, against Tottenham Hotspur in a Division One (Old) match on 17 October 1970, when the North and South Banks were terraced, as was the old 'Chicken Run' to the front of the East Stand. The record attendance at Upton Park since it has become an all-seater is 35,550, recorded against Manchester City on 21 September 2002 in a Premier League match. 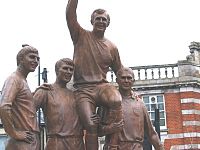 Plans were submitted to increase the capacity to approximately 40,500 through the building of a new larger East Stand, that would additionally use the spare space that was created when the Doctor Martens stand was built further West than the old West Stand. This will result in a fully enclosed stadium by joining the new stand to the Centenary Stand and the Bobby Moore Stand. Relegation to the Football League Championship in 2003 resulted in the development being delayed. However promotion to the FA Premier League via the Play-Offs in May 2005 resulted in the immediate re-submission of plans to Newham London Borough Council.

Throughout 2006, talk was rife of West Ham moving to the Olympic Stadium after the 2012 Olympics, with speculation increasing after new club chairman Eggert Magnusson confirmed he was interested in a move there. However, talks broke down between the club and the Olympic Committee after it was announced that the Stadium would be reduced to a 25,000 all seater after the Olympic Games, which is over 10,000 less than the Boleyn Ground's current capacity, and that the stadium would be keeping its running track, leaving supporters further away from the pitch and affecting the atmosphere within the stadium on match days. Rumours suggested that West Ham could move to a new stadium located at the Parcelforce depot near to West Ham Underground/mainline station. On 7 November 2007, London mayor Ken Livingstone announced that a new site had been identified for West Ham to build a new stadium.[4]

On 23 March 2010, the club announced they were in fact working on a joint bid with Newham London Borough Council to move into the Olympic Stadium.[5] In November 2010, West Ham United commenced a search for potential developers for "informal discussions" about what would happen to the ground if it wins its bid to take over the Olympic Stadium after the 2012 Games.[6] After a long and protracted bidding process that involved judicial reviews from rival bidders and the deal collapsing at one point, on 22 March 2013 it was announced that the clubs tenancy bid had been successful and West Ham would take over a 99-year lease and move there in August 2016.

A panorama of West Ham's Boleyn Ground from the East Stand

Upton Park has been an all-seater stadium since the early 1990s, after professional clubs had to meet new FA regulations for stadium safety after the Hillsborough Disaster in 1989. Upton Park has four main stands, which are named The Sir Trevor Brooking Stand, The Bobby Moore Stand, The East Stand and The Betway Stand. 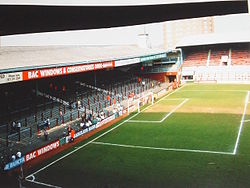 The Sir Trevor Brooking Stand (formerly the North Bank then the Centenary Stand) was built in 1995 which coincided with the club's 100th season, after being formed in 1895 as Thames Ironworks. Its name was changed from the Centenary Stand to the Sir Trevor Brooking Stand in July 2009.[7] The stand holds around 6,000 seats, and has two tiers, with the Upper Tier seating known as the Family Section, as supporters can only purchase tickets up there if with a child. The lower tier behind the goal is split between both home and away fans. West Ham United initially give around 2,500–3,000 tickets to away supporters, going from the furthest side to the left of the bottom tier right up to behind the goal. 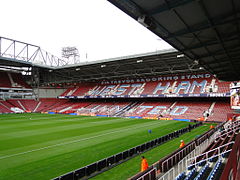 If the away side cannot sell all their tickets, they are returned and re-sold to home supporters, as there is big demand from West Ham fans to purchase seats in the lower seating area. Home fans in the lower area generally prefer to stand during games and sing throughout.[citation needed] It is known as one of the more atmospheric sections of the stadium, especially with the two sets of supporters next to each other (separated by stewards and police). There is also one of two large LCD screens situated in the corner between the Sir Trevor Brooking Stand Stand and the East Stand.

The East Stand is situated on the far side of the Boleyn Ground, opposite the West Stand which houses the offices and dressing rooms. The stand is the oldest and smallest stand in the stadium, being built in 1969[8] and holding only 5,000 seats due to its narrow width. The stand used to be known as the loudest and most intimidating stand at Upton Park back in the 1970s–80s, but since the advent of all-seater stadiums and the conversion of the old 'Chicken Run' terrace at the front of the East Stand to seating, and with the Upton Park pitch being moved further back from the East Stand nearer the new Dr. Martens Stand, the East Stand has seemed to have lost its famous atmosphere from past years.[9] However a small section in the far corner of the stand next to the away fans recently have been standing and is now known as one of the loudest parts of the ground. The real 'Chicken Run' was an old wooden stand (standing room only) on the east side of the pitch. It was surrounded by a similar sort of wire to that used on chicken runs and when you viewed it from the opposite side of the ground it looked just like a chicken run. It was knocked down and rebuilt in 1969.[9]

The stand used to have the words DAGENHAM MOTORS written into the bottom tier through the seats,[10] but was changed during the 2006/2007 season, despite the club splitting from their sponsorship with the car company back in 1997. The stand is also the only stand left at Upton Park to still have a small minority of wooden seats, in the middle of the Upper Tier. There were also plans to build a new East Stand soon after the Dr. Martens stand was completed in 2001, which would have seen the stadiums capacity rise from 35,345 to around 40,500, but the plans were put on hold after a combination of resistance from the local residents behind the stand and the club's relegation from the Premier League in 2003, which spiralled the club into debt at the time.[10] 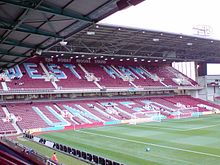 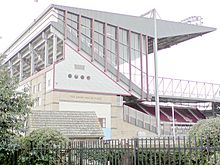 The Bobby Moore Stand (East side) 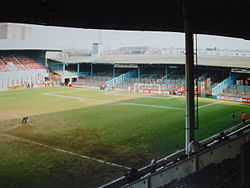 The Bobby Moore Stand (formerly the South Bank), was built in 1993 and holds up to 9,000 spectators all seated. The stand was built originally to comply with new stadium all-seater regulations, and the name of the stand was decided after the death of the club's legendary captain from the successful mid-1960s side in the same year of construction. The stand has two tiers, and spells the words WEST HAM UNITED through the seats of both tiers. The lower tier of the Bobby Moore stand, like the Sir Trevor Brooking Stand, is well known for its supporters' passion and the atmosphere they create through standing and singing. The stand has executive boxes situated between the Upper and Lower tiers, and includes a digital clock. The stand also had a small amount of renovation in 2001 after the construction of the new Dr. Martens Stands, with a new second LCD screen in the stadium being introduced between the two stands and new seats added on the end of the stand to join with the new Dr. Martens Stand. 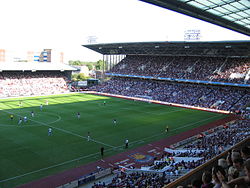 View from the West Stand

The West Stand is the newest and by far the largest stand inside Upton Park, holding up to 15,000 spectators and was renamed after Betway became the official sponsors of WHUFC.[11] The stand was built in 2001 as the Dr. Martens Stand, bringing the stadium capacity up from around 26,000 to 35,647. The West Stand is the main stand in Upton Park, as it includes two tiers for paying home supporters, separated by two tiers of executive boxes. The stand also hosts all of the club's offices, board rooms, suites, dressing rooms, official shop, and the West Ham United Hotel. It is also the largest single football stand in London. The stand's main feature is seen from the exterior of the stadium, with two large turrets built onto the stand with the club badge embedded on both, going with the theme of the club's badge. The terrace also has two scoreboards at both corners joining with the Centenary and Bobby Moore Stands, displaying the score and time of the game in process. The stand is so large, it is visible from the A406 North Circular Road and from The A13 Newham Way, where you can clearly make out the roof of the stand over the tower blocks. The stand was officially opened by HM The Queen, where Her Majesty was introduced to the manager and captain at the time, Glenn Roeder and Joe Cole.

In 2009, following the end of Dr. Martens sponsorship, the stand resumed the old name of the West Stand.[12]

In February 2014, West Ham announced the sale of the ground to the development company the Galliard Group once the move to the Olympic Stadium has been completed. The developer's plans include 838 new homes, retail outlets and leisure facilities which will be available by 2018. The possibility of a statue of Bobby Moore and a landscaped garden named after him has also been revealed. The plans have caused controversy for only including 51 "affordable" homes and no social housing.[25][26]

In June 1989 evangelist Billy Graham hosted a three-day Christian mission to London to which free tickets were given away and gave away more tickets than seats, not expecting them all to be used. In the event they were used and many were locked out, after negotiations between the club and Graham's representatives, the crowd were allowed to use the pitch.[27]

On 9 May 2012, the Boleyn Ground was confirmed as the venue for the fight between David Haye and Dereck Chisora, a fight sanctioned by the Luxembourg Boxing Federation on 14 July 2012. The fight caused controversy at the time as neither fighter held a license from the British Boxing Board of Control.[29]