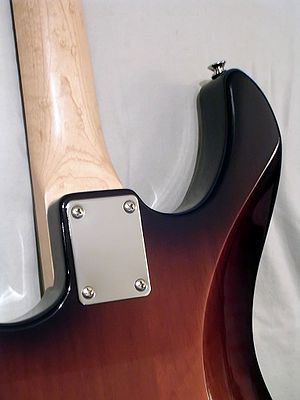 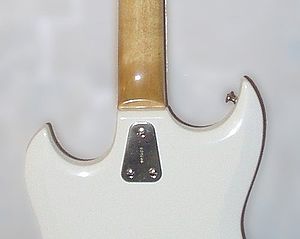 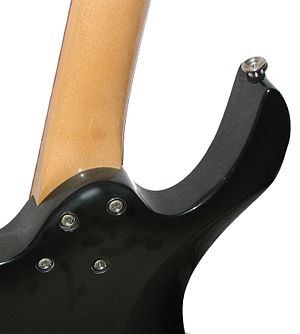 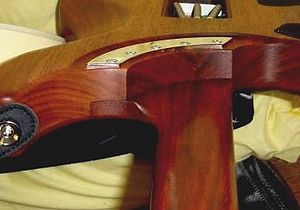 Bolt-on neck is a method of guitar (or similar stringed instrument) construction that involves joining a guitar neck and body using screws or bolts, as opposed to glue as with set-in neck joints.

The "bolt-on" method is used frequently on solid body electric guitars and on acoustic flattop guitars. In the typical electric guitar bolt-on neck joint, the body and neck cross in horizontal plane, the neck is inserted in a pre-routed "pocket" in the body, and they are joined using 3 or 4 (rarely 6) screws.

As screw heads damage the wood and could put extra stress on it, typically a rectangular metal plate or a pair of metal plates are used to secure the joint and re-distribute the screw pressure evenly. Such a plate is usually criticized for making playing on top frets uncomfortable, so, manufacturers sometimes employ some kind of more intricate method to hide a metal plate, smooth the angles and make access to top frets easier. However, a visible metal plate is usually considered as a part of "vintage" style and they are a popular place to emboss manufacturer's logos, stamp out serial numbers and put other artwork.

Many electric guitars with bolt-on necks, Fender in particular, writes the production date on the end of the neck, where it is hidden when the neck is attached to the body. The neck must be removed to see the date. The neck date is often cross referenced with the serial number to accurately date the guitar.[1]

The typical acoustic guitar bolt-on neck as popularized by Taylor Guitars includes threaded inserts in the heel of the neck. Bolts inserted through the neck block of the body from inside the instrument attach the neck to the body.[2]

The term is usually a misnomer, introduced mostly by Fender whose guitars traditionally had what is called bolt-on necks. Real bolted joints (i.e., using bolt coupled with a nut) exist—particularly in acoustic guitars—but are less common in electric guitars.[3] However, at least one aftermarket manufacturer[4] offers a replacement for Fender neckplates and screws that uses captive inserts—embedded in the guitar body by means of an external self-tapping thread — and M4 machine screws. The maker claims this permits a higher fastening torque than ordinary wood screws, and hence a better coupling between neck and body.

The difference is that a bolt-on neck involves constructing a protruding flange that fits inside a routed pocket in the guitar body. Then the neck is secured inside this pocket using screws that run perpendicular (at right angles) to the surface of the guitar. In contrast, a bolt-in neck doesn't need to have such a flange inside the guitar body, and screws or bolts run parallel to the surface of guitar, entering the back of the heel.[7]

Usually (but not always), in bolt-in variant, a neck pickup is mounted directly on the extended neck wood underneath it, not on the guitar body. This has been referred to as "direct coupling", because the pickup is mounted on the neck and not the body, in other words, directly coupled to the neck, and is considered superior by some in terms of tone.[8]

Bolt-in neck is used in electric guitars on a regular basis, but on acoustic guitars it is somewhat rare, and harder to produce. However it is considered superior by some in terms of sound and playability.[9] However, given a relative uncommonness of bolt-in necks in electric guitars, most luthiers call both neck joints "bolt-on".

Notable manufacturers of guitars with bolt-on necks include: