listen (help·info) or [bolˈdzaːno]; German: Bozen, historically also Botzen;[1] Ladin: Balsan or Bulsan; Latin: Bauzanum) is the capital city of the province of South Tyrol in northern Italy. With a population of 105,713 (2013), Bolzano is also by far the largest city in South Tyrol.

Bolzano is the seat of the Free University of Bozen-Bolzano, where lectures and seminars are held in English, German and Italian. The city is also home to the Italian Army's Alpini High Command (COMALP) and some of its combat and support units.[2]

In 2014 version of the annual ranking of quality of life in Italian cities, Bolzano was ranked as having the 10th Best Quality of Life in Italy.[3]

The modern-day Bolzano was in ancient times a marshy region inhabited by the Raetian Isarci people, traditionally believed to be descendants of Etruscan refugees fleeing Italy from the invading Gauls.[4] The Romans built a settlement after the area had been conquered in 15 BC by General Nero Claudius Drusus. The military settlement, Pons Drusi (Drusus Bridge), was named after this Roman General. During this time the area became part of the region Venetia et Histria (Regio X) of ancient Italy.

In 1948, excavations of the current Cathedral led to the discovery of an ancient Christian basilica from the 4th century. Also discovered was a Roman cemetery, including the tomb of "Secundus Regontius" with Latin inscriptions dating to the 3rd century, making him the oldest known inhabitant of Bolzano.[5]

During the gradual decline of the Roman's influence in the 7th century, Bavarian immigration took place and the first mention of a Bavarian ruler in Bolzano dated from 679.[6] At that time, the Bavarians named the nearby villages around Bolzano Bauzanum or Bauzana.[7] German populations have been present in the region of Tyrol since this time.

In 1027 the area of Bolzano and the rest of the diocese was conferred, by the emperor Conrad II from the Salian dynasty, upon the bishops of Trent. In the late-12th century, the bishop founded a market town, along the Lauben thoroughfare. The town therefore became an important trading post on the Transalpine Augsburg-Venice route over the Brenner Pass, elevation 1,371 metres (4,498 ft) above sea level, within the Holy Roman Empire.[8]

In 1277 Bolzano was conquered by Meinhard II, the Count of Tyrol, leading to a struggle between the Counts of Tyrol and the bishops of Trent. In 1363, the County of Tyrol fell under the influence of Habsburg Austria and the Holy Roman Empire. In 1381, Duke Leopold granted the citizens of Bolzano the privilege of a town council. This gradually eliminated the influence and power previously held by the bishops of Trent over the next few decades. In 1462, the bishops eventually resigned all their rights of jurisdiction over the town.[9]

From the 14th and 15th centuries onwards, a large market fair was organised four times per year to greet tradesmen and merchants en-route the Brenner Pass. The Mercantile Magistrate was therefore founded in 1635 by the Austrian duchess Claudia de' Medici. During every market season, two Italian and two Germanic officers, who were appointed among the local tradesmen, worked in this magistrate office. The establishment of an official trade organisation strengthened Bolzano as a cultural crossroad in the Alps.[10] 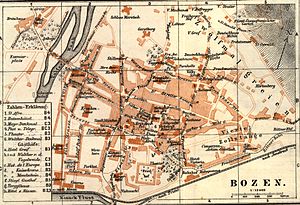 Bolzano in 1914, at the outbreak of World War I

After the dissolution of the Holy Roman Empire in 1806, Bolzano became part of the Napoleonic Kingdom of Italy and was incorporated into the Dipartimento Alto Adige.[11] After the Congress of Vienna (1814-15) Bolzano returned to the County of Tyrol, within the Austrian Empire and subsequently the Dual Monarchy of Austria-Hungary in 1866. The County covered both modern-day South Tyrol and the Federal States of Tyrol and East Tyrol in Austria.

In 1915, the Triple Entente powers promised Italy territorial gains if she would enter the First World War on the side of the Entente instead of siding with the German Empire and Austria-Hungary. When Italy abandoned the Triple Alliance (1882), the Entente offered her territorial promises in Tyrol and Istria. This secret arrangement was confirmed in the Treaty of London (1915).

After Italy declared war on Austria-Hungary on May 24, 1915, heavy fighting took place all along Tyrol`s southern border for the entire duration of the conflict. For the next 3 and a half years Tyrol`s southern border became the front line between Austro-Hungarian and Italian troops. Tyrol`s south frontier was - and still is - dotted with tens of defensive fortresses that had been built in view of a possible Italian attack. Losses on both sides amounts to several thousands. During WWI, tens of thousands of civilians living along Tyrol`s southern border were evacuated to either of the two countries, the majority to Bohemian and inner Austrian areas, and some to Italian internment camps, away from the front line. On November 3, 1918 the armistice of Villa Giusti, near Padova ended military operatons between Italy. Subsequently, Italian troops entered Tyrol and occupied the Austrian areas south of the Brenner Pass. Italian control of South Tyrol was internationally recognized in 1919. At the time of Bolzano's annexation by the Kingdom of Italy the town was settled primarily by a German-speaking population. As of 1910, 29,000 inhabitants identified themselves as German speakers and only 1,300 as Italian speakers, these latter ones mainly from the Italian speaking areas of Tyrol, namely Welschtirol, currently known as Trentino. [12]

Along with the rest of South Tyrol, Bolzano was subjected to an intensive Italianisation programme enforced by Fascist leader Benito Mussolini from the 1920s onwards to September 8, 1943 - when Italy left the military alliance with nazi-Germany and South Tyrol fell under direct German control. The goal of such programme was to outnumber the local German-speaking population by tripling Bolzano's population through force-fed Italian immigration from other regions of Italy.[12] In 1927 Bolzano became the capital of the province of Bolzano. Any reference to and use of the words Tyrol and Tyrolean were banned by law and were punishable offenses. In 1933, Adolf Hitler came to power in the Weimar Republic. Mussolini and the Fascists worried that Hitler, in pursuing his ideology of all ethnic Germans under one Reich, would claim South Tyrol from Italy. To avoid such prospect, in 1939 Mussolini and Hitler signed the Option Agreement, by which Germany would renounce territorial claims over South Tyrol as Germany's Lebensraum (living space). Furthermore, ethnic South-Tyroleans who had opted to stay in South Tyrol and refused resettlement to the Third Reich were subjected to full-scale Italianisation, including loss of their German names and national identity, prohibition of schooling in German and use of German for their daily transactions. [13]

During the Second World War, Bolzano was the site of the Nazi's Bolzano Transit Camp, a concentration camp for persecuted Jews and political prisoners. After 1943, heavy fighting against Nazi Germany and the Axis Powers took place in the Dolomites.[14]

After the War, independence movements gained popularity among the German-Tyrolean population in Bolzano and South Tyrol. In the 1960s a series of terrorist attacks and assassinations were carried out by the South Tyrolean Liberation Committee – a German secessionist movement – against Italian police and electric power structures(one notable incident being the Night of Fire on 12 June, 1961), after which the United Nations intervened to enforce the start of bilateral negotiations between Italy and Austria. After 11 years of mediation and negotiation the two counties reached an agreement that would guarantee self-government to the newly created Autonomous Province of South Tyrol.

In 1996, the European Union approved further cultural and economic integration between the Austrian province of Tyrol and the Italian autonomous provinces of South Tyrol and Trentino (Welschtirol)by recognizing the creation of the Euro Region of Tyrol-South Tyrol-Trentino.

The city thrives on a mix of old and new high-quality intensive agriculture (including wine, fruit, and dairy products), tourism, traditional handicraft (wood, ceramics), and advanced services. Heavy industry (machinery, automotive, and steel) installed during the 1930s has now been mostly dismantled.[citation needed] The local economy is very dependent on the public sector and especially the provincial government.[citation needed]

Bolzano is the biggest city in South Tyrol, which is an autonomous province in Northern Italy with a special statute. This statute preserves the rights of the German-speaking minority in Italy. This unique system was admired by the Dalai Lama, who visited the city on several occasions to study a possible application in Tibet.[17] It has also been presented as role model for the successful and fair resolution of inter-ethnic conflict to other regions of the world.[18]

Being located at multiple climate borders, Bolzano features a humid subtropical climate (Cfa) with hot summers and very cool winters. According to the Trewartha classification, this climate could not be really considered a subtropical climate because fewer than 8 months are at least 10 °C (50 °F), and thus would be considered a semi-continental climate with hot summers. Some of its suburbs are designated an oceanic climate (Cfb) based upon cooler summer temperatures, while mountains in the area may feature a continental climate (Dfb). 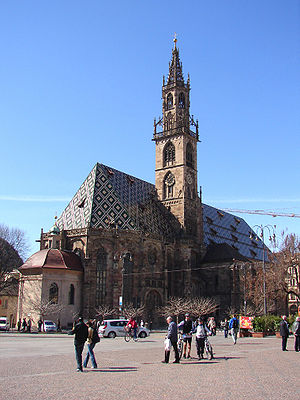 Its medieval city centre, Gothic and Romanesque churches and bilingual signage give it the flavour of a city at the crossroads of Italian and Austrian cultures. This and its natural and cultural attractions make it a popular tourist destination.

Among the major monuments and sights are: 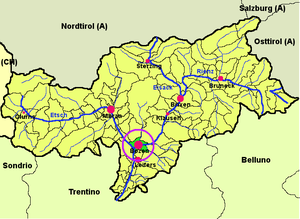 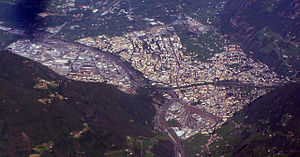 Bolzano is connected to the motorway network A22-E45[23] to Trento and Verona and to Innsbruck (Austria) and Munich (Germany).

The city is also connected to the Italian railway system. Bolzano railway station, opened in 1859, forms part of the Brenner railway (Verona–Innsbruck), which is part of the main railway route between Italy and Germany. The station is also a junction of two branch lines, to Merano and Mals.

There is a 50-kilometre (31 mi) network of cycle paths, and about 30 percent of journeys in Bolzano are made by bicycle.[24]

There is a regular connection between Bolzano Airport (IATA: BZO) and Rome.

The town is host to an annual road running competition – the BOclassic – which features an elite men's 10K and women's 5K races. The event, first held in 1975, takes place on New Year's Eve and is broadcast live on television by Rai Sport Più.[25][26]

Bolzano is twinned with: