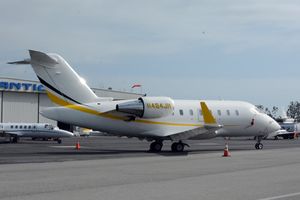 The origin of the Challenger 600 lies in Canadair’s purchase of a concept for a business jet aircraft, the LearStar 600 from the American inventor and aircraft developer Bill Lear. However, Lear had practically no influence on the ensuing development and design of the aircraft.[2][3] Even the name LearStar was not new to this concept, since Lear had long before used the name for his conversion of Lockheed Lodestars into business transports.[4] Thus, Canadair quickly abandoned the name LearStar and adopted the name Challenger.[5]

Canadair's top management was of the opinion that Lear’s concept was sketchy at best.[3] Lear did not have an expert grasp of aeronautical engineering.[6] He was also at a financial low point, with a skeleton staff. Thus, he had only been able to pay a California aeronautical consultant to do some very preliminary design explorations.[7]

However, Canadair planned to use Lear’s name and skills at self-promotion to secure extensive financial guarantees for a business jet project from the Canadian Federal government.[3] This proved an effective choice. In the 1980 The National Film Board of Canada documentary on the development of the aircraft,[8] future Prime Minister Jean Chrétien specifically refers to the effect of personal contact with Lear (on Chrétien’s decision to direct financial support to Canadair’s program).

At the time of these events, Chrétien was successively President of the Treasury Board, Minister of Industry, Trade and Commerce, and Minister of Finance, in the Canadian Federal government. Due to the use of letters of comfort, the extent of the Ministry's financial commitments for Canadair could be kept from parliament and the public for several years.[9] These financial guarantees were later used as an academic example of insufficient monitoring and lax controls in government support of industry.[10]

While the Challenger would be similar in general configuration to other aircraft of its type already on the market, certain of its features would stand out, for example, the use of a widened fuselage that allowed a "walk-about cabin". The Challenger was also one of the first bizjets designed with a supercritical wing.

On 8 November 1978, the prototype aircraft took off at Montreal, Canada. The second and third prototypes flew in 1979. A test flight on 3 April 1980 in the Mojave Desert resulted in disaster, the aircraft crashing due to the failure of the release mechanism to detach the recovery chute after a deep stall, killing one of the test pilots (the other test pilot and the flight test engineer parachuted to safety).[11]

Despite the crash, both Transport Canada and the Federal Aviation Administration in the United States certified the aircraft in 1980, albeit with restrictions to pilots including a limited maximum takeoff weight. A program to reduce the aircraft's weight was then implemented to improve the aircraft's range.

Challengers can be identified visually by their distinctive fowler flap design, where the fairings can be seen below the wings, a sight much more common on commercial airliners. 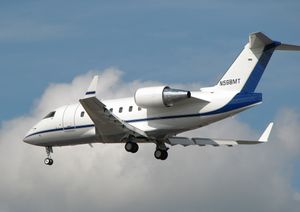 A Challenger 604 shortly before landing 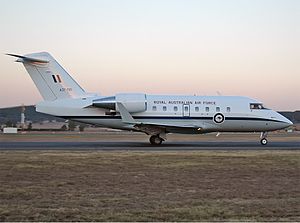 A Challenger 604 from the RAAF

CL-601-1A
A refined version including winglets to decrease drag and more powerful General Electric CF34-1A (66 built, including six Canadian Forces CC-144B)[12]
CL-601-1A/ER
601-1A retrofitted with an additional fuel tank in the tail
CL-601-3A
GE CF34-3A engines with a higher flat rating and a glass cockpit. This was the first version marketed by Bombardier, indeed.
CL-601-3A/ER
601-3A with an additional, optional fuel tank in the tail
CL-601-3R
The tail tank was made standard, CF34-3A1 Engines were introduced.
CL-601s
Version powered by GE CF34-3A2 engines[13]

CL-604
A major upgrade of the 601 design, incorporating more advanced GE CF34-3B engines; increased fuel capacity, including saddle tanks in the rear of the aircraft; new undercarriage for a higher takeoff and landing weight; structural improvements to wings and tail; and a new Rockwell Collins ProLine 4 avionics system.

CL-604 MMA
(Multi-Mission Aircraft), militarized version, developed by Field Aviation,[14] in Danish service.[14] The aircraft are employed on maritime patrol and search and rescue missions.They are capable of landing on the short, rough, gravel airstrips common in the Arctic.[14]

C-143A
A single Challenger 604 aircraft was acquired by the United States Coast Guard in December 2005 as its new Medium Range Command and Control Aircraft (MRC2A).[15]

CL-605
Introduced in early 2006 as an avionics and structural upgrade of the 604 design. Structural improvements include larger cabin windows. Cockpit instrumentation updated with the Collins Proline 21 avionics and "electronic flight bag" capability. It can be visually identified by a new, rounded tailcone. 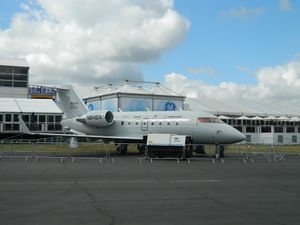 CL-605 MSA
A maritime patrol aircraft design under development by Boeing.[16] Boeing has proposed a repackaging of some of the Boeing P-8 Poseidon sensors but not weapons into a less expensive airframe, the Bombardier Challenger 605 business jet.[17] This aircraft is named Maritime Surveillance Aircraft (MSA) and has been depicted with the AN/APY-10 radar, an electro-optical sensor in a retractable turret, and a magnetic anomaly detector.[18] On 28 February 2014, a MSA demonstrator which is a modified CL-604 made its first flight, but the final aircraft will use the CL-605 airframe.[19][20] The demonstrator currently has the external shapes for the sensors and communications systems which will be added later. The final MSA is expected to cost $55 million to $60 million per aircraft.[21] 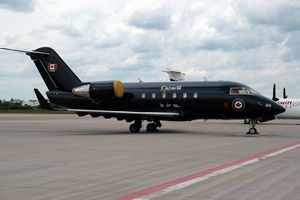 The Challenger 601 is used to transport the Governor General, government officials, foreign dignitaries and the Prime Minister of Canada using the designation CC-144 Challenger. 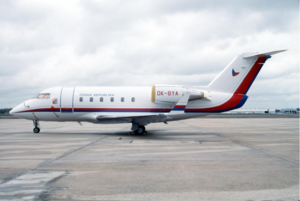 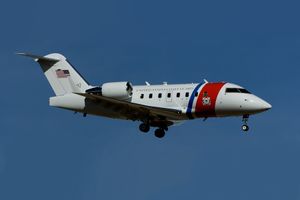