The Bombay Explosion (or Bombay Docks Explosion) occurred on 14 April 1944, in the Victoria Dock of Bombay (now Mumbai) when the freighter SS Fort Stikine carrying a mixed cargo of cotton bales, gold, and ammunition including around 1,400 tons of explosives, caught fire and was destroyed in two giant blasts, scattering debris, sinking surrounding ships and setting fire to the area, killing around 800 people.[1][2]

The vessel, the voyage and cargo

The SS Fort Stikine was a 7,142 gross register ton freighter built in 1942 in Prince Rupert, British Columbia, under a lend-lease agreement, and was named after Fort Stikine, a former outpost of the Hudson's Bay Company located at what is now Wrangell, Alaska.[citation needed]

Sailing from Birkenhead on 24 February via Gibraltar, Port Said and Karachi, she arrived at Bombay on 12 April 1944. Her cargo included 1,395 tons of explosives including 238 tons of sensitive "A" explosives, torpedoes, mines, shells, munitions, Supermarine Spitfire fighter aircraft, raw cotton bales, barrels of oil, timber, scrap iron and approximately £890,000 of gold bullion in bars in 31 crates.[3] The 87,000 bales of cotton and lubricating oil were loaded at Karachi and the ship's captain, Alexander James Naismith, recorded his protest about such a "mixture" of cargo.[3] The transportation of cotton through sea route was inevitable for the merchants, as transporting cotton in rail from Punjab and Sindh to Bombay was banned at that time.[4] Naismith, who lost his life in the explosion, also described the cargo as "just about everything that will either burn or blow up".[3] The vessel had berthed and was still awaiting unloading on 14 April, after 48 hours of berthing.[3]

In the mid-afternoon around 14:00, the crew were alerted to a fire onboard burning somewhere in the No. 2 hold. The crew, dockside fire teams and fireboats were unable to extinguish the conflagration, despite pumping over 900 tons of water into the ship, nor were they able to find the source due to the dense smoke. The water was boiling all over the ship, due to heat generated by the fire.[5]

At 15:50 the order to abandon ship was given, and sixteen minutes later there was a great explosion, cutting the ship in two and breaking windows over 12 km (7.5 mi) away. This and a later second explosions were powerful enough to be recorded by seismographs at the Colaba Observatory in the city. Sensors recorded that the earth trembled at Shimla,[6] a city located at a distance of over 1700 km. The shower of burning material set fire to slums in the area. Around two square miles were set ablaze in an 800 m (870 yd) arc around the ship. Eleven neighbouring vessels had been sunk or were sinking, and the emergency personnel at the site suffered heavy losses. Attempts to fight the fire were dealt a further blow when a second explosion from the ship swept the area at 16:34. Burning cotton bales fell from the sky on docked ships, on the dock yard, and on slum areas outside the harbour. The sound of explosions was heard as far as 50 mi (80 km) away.[7] Some of the most developed and economically important parts of Bombay were wiped out because of the blast and resulting fire.[7]

The details of the explosions and losses were first reported to the outside world by Radio Saigon, a Japanese-controlled radio which gave a detailed report of the incident on 15 April 1944.[8] British-Indian wartime censorship permitted news reporters to send the reports only in the second week of May 1944.[8] Time Magazine published the story as late as 22 May 1944 and still it was news to the outside world.[8] A movie depicting the explosions and aftermath, made by Indian cinematographer Sudhish Ghatak, was confiscated by military officers[3] although parts of it were shown to the public as a newsreel at a later date.[3] 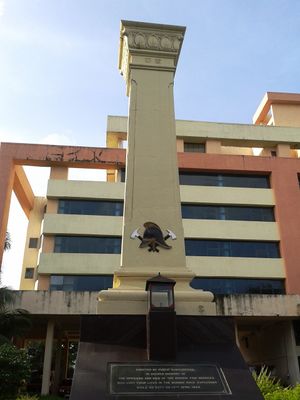 The total number of lives lost in the explosion is estimated at more than 800, although some estimates put the figure around 1,300.[9] More than 500 civilians lost their lives, many of them residing in adjoining slum areas, but as it was wartime, information about the full extent of the damage was partially censored.[3] The results of the explosion are summarised as follows:

As part of the salvage operation, a British officer was seconded to the Indian government, to establish the pumping operation. This was Sub-Lieutenant Ken Jackson, RNVR, who along with Chief Petty Officer Brazier arrived in Bombay on 7 May 1944. Over a period of three months many ships were salvaged. The de-watering operation took three months to complete, after which Jackson and Brazier returned to their base in Colombo. Jackson remained in the Far East for another two years, conducting further salvage work. For their efforts with the pumping operation, both men were rewarded: Brazier was awarded the MBE, and Jackson received an accelerated promotion. An Australian minesweeper, HMAS Gawler, landed working parties on 21 June 1944, to assist in the restoration of the port.[11]

File:Bombay-Docks-aftermath3.png
Aftermath of the explosion at the harbour
File:1944 Bombay harbour explosion propeller piece.jpg
A piece of propeller that landed in St. Xaviers High School, about 3 mi (4.8 km) from the docks.

It took three days to bring the fire under control, and later, 8,000 men toiled for seven months to remove around 500,000 tons of debris and bring the docks back into action. The official death toll was 740, including 476 military personnel, with around 1,800 people injured; unofficial tallies run much higher. The occupants of the slums were largely unregistered. In total, twenty-seven other vessels were sunk or damaged in both Victoria dock and the neighbouring Prince's Dock.[citation needed]

The inquiry into the explosion identified the cotton bales as probably being the seat of the fire. It was critical of several errors: storing the cotton below the munitions, not displaying the red flag required to indicate a dangerous cargo on board, delaying unloading the explosives, not using steam injectors to contain the fire and a delay in alerting the local fire brigade.[12]

Many families lost all their belongings and were left with just the clothes on their back. Thousands became destitute. It was estimated that about 6,000 firms were affected and 50,000 lost their jobs.[3] The government took full responsibility for the disaster and monetary compensation was paid to citizens who made a claim for loss or damage to property. During normal dredging operations carried out periodically to maintain the depth of the docking bays, many intact gold bars have been found over time – some as late as February 2011 – and they have since been returned to the government. A live shell weighing 45kg (100 lb) was also found in October 2011.[13] The Mumbai Fire Brigade's headquarters at Byculla has a memorial built in the memory of the numerous fire fighters who died. National Fire Safety Week is observed across India[14] from 14 to 21 April in memory of the 66 firemen[10] who died in this explosion.