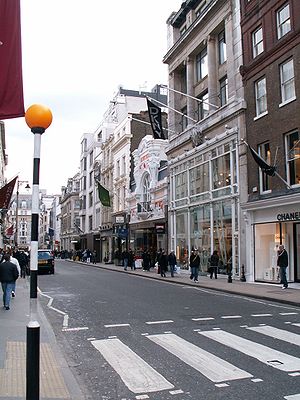 Bond Street in the West End of London, connects Piccadilly in the south to Oxford Street in the north. The street, consisting of two sections, has been a popular shopping area since the 18th century and is the home of many fashion outlets that sell prestigious and expensive items. The southern section is Old Bond Street and the longer northern section New Bond Street—a distinction not generally made in everyday usage.

The street was originally fields surrounding Clarendon House on Piccadilly, which were developed by Sir Thomas Bond. It was built up in the 1720s, and by the end of the 18th century was a popular place for the upper-class residents of Mayfair to socialise. Prestigious and expensive shops were established along the street but it declined as a centre of social activity in the 19th century, although it held its reputation as a fashionable place for retail, and is home to the auction houses Sotheby's and Bonhams (formerly Phillips) and the department stores Fenwick and Tiffany's. It is one of the most expensive and sought after strips of real estate in Europe.

Bond Street is the only street that runs between Oxford Street and Piccadilly.[1] Old Bond Street is at the southern end between Piccadilly and Burlington Gardens. The northern section, New Bond Street, extends as far as Oxford Street.[1] The whole street combined is around 0.5 miles (0.8 km) long.[2] The street is narrow, and many of the shops along its front are less than 20 feet (6 m) wide.[3] 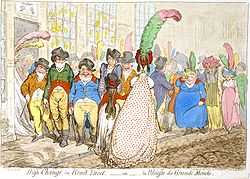 In High-Change in Bond Street (1796), James Gillray caricatured the lack of courtesy on Bond Street (young men taking up the whole footpath), which was a grand fashionable milieu at the time.

There has been evidence of Roman settlement around what is now Bond Street. In 1894, a culvert made from brick and stone was discovered in the area.[7] The street was named after Sir Thomas Bond, the head of a syndicate of developers who purchased a Piccadilly mansion called Clarendon House, from Christopher Monck, 2nd Duke of Albemarle in 1686, and proceeded to demolish the house and develop the area.[8] At that time, the house backed onto open fields, known as Albemarle Ground, and the development of various estates in Mayfair had just begun.[1]

New Bond Street was added during a second phase of construction 14 years after Bond's syndicate began developing the area.[8] Most of the building along the street occurred in the 1720s, on what was the Conduit Mead Estate.[1][3] John Rocque's map of London, published in 1746, shows properties along the entire length of Bond Street, including the fully constructed side streets. The two parts of the street have always had separate names, and a plan by the council to merge the two into a singular "Bond Street" in the 1920s were rejected by locals.[9]

During the 18th century, the street began to become popular with the bourgeoisie living around Mayfair. Shop owners let out the upstairs for residential purposes, attracting lodgers such as Jonathan Swift, George Selwyn, William Pitt the Elder and Laurence Stern.[1] In 1784, Georgiana Cavendish, Duchess of Devonshire, an active socialite, demanded that people boycotted Covent Garden as its residents had voted against Whig member of parliament Charles James Fox, causing him to lose his seat in parliament and dissolve the Fox–North Coalition. She insisted people should look for nearer shopping streets, and encouraged people to go to Bond Street. Consequently, the street became a retail area for people living in Mayfair. By the end of the century, an upper class social group known as the Bond Street Loungers had appeared, wearing expensive wigs and parading up and down the street in a pretentious manner.[8] 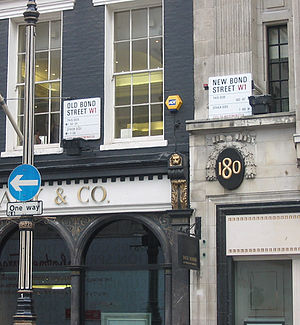 Lord Nelson stayed at temporary lodgings on New Bond Street between 1797–8, and again in 1811–13.[10] Thomas Pitt, 2nd Baron Camelford lived on Bond Street and was unhappy about the presence of the Bond Street Loungers.[8] Already notorious for a violent and abusive temper, on 7 October 1801, he refused invitations to join in celebrations of peace between Britain and France (which led to the Treaty of Amiens), resulting in an altercation with several Loungers at his doorstep. Camelford retreated upstairs and fired upon the crowd with a pistol.[11]

During the 19th century, Bond Street became less known for its social atmosphere and increased its reputation as a street for luxury shopping. The auctioneer Phillips was established in 1796 at No. 101 Bond Street, specialising in stringed instruments and sheet music.[12] The jewellers Asprey originally opened in 1830 at Nos. 165–169 New Bond Street.[1][13] The Jewish practice of Kabbalah has been associated with the street after former East End trader Sarah Levenson opened a shop on No. 50 New Bond Street in 1856 and immediately became profitable, albeit through exaggerated and questionable product claims.[14] Levenson was twice taken to court and prosecuted for fraud, each resulting in a five-year prison sentence. She died mid-way through the second.[13] Nevertheless, the practice regained popularity and a Kabbalah Centre remains on the street.[14]

The Royal Arcade links Old Bond Street with Albemarle Street. It was originally proposed in 1864 as a longer link between Old Bond Street and Regent Street, but this was rejected due to the scale of proposed demolition and restricting access to existing properties.[15] It was subsequently redesigned to its current layout, opening in 1879[16] and replacing the Clarendon Hotel, which had been demolished in 1870.[17]

The street has maintained its reputation for luxury shopping into the 21st century, and has on occasions been regarded as the best retail location in Europe.[18] In 2011, Bloomberg Business reported that New Bond Street was the most expensive retail street in Europe after the Champs-Élysées in Paris.[19] As a consequence, though, the street has suffered from armed robbery on numerous occasions, with thieves being attracted by the high value of goods that can be stolen in raids. The Graff Diamonds robbery in Bond Street in 2009 resulted in an estimated loss of £40 million.[20][21][22] 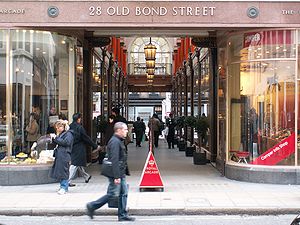 Westminster City Council have said that Bond Street has the highest density of haute couture stores anywhere in the world, attracting "the rich, the famous, and the simply curious".[23] The entire length of Bond Street has been part of the Mayfair Conservation Area controlled by Westminster City Council since 1969. Building alterations and constructions are tightly controlled to ensure the street's appearance and upkeep are unaltered. Many buildings are listed.[3] The council regulates the style and materials used on shop front advertising.[24]

At one time, Bond Street was best known for top-end art dealers and antique shops that were clustered around the London office of Sotheby's auction house—which has been at Nos. 34–35 Bond Street since 1917[25] and the Fine Art Society, founded in 1876.[26] The sculpture over the entrance to Sotheby's is from Ancient Egypt and is believed to date from around 1600BC. It is the oldest outdoor sculpture in London.[26]

Some dealers and antique shops remain, but many of the shops became occupied by fashion boutiques, some of which are branches of global designer brands. The street still has a reputation as a fashionable place for shopping, including the flagship stores for Ralph Lauren and Cartier.[26] Fenwick have had a department store on Bond Street since 1891.[26] The Phillips building at No. 101 is still used for auctions; the company was bought by Bonhams in 2001 and subsequently spent £30 million expanding and refurbishing the premises.[19] In 2015, Valentino announced plans to build a new flagship store on Old Bond Street.[27] 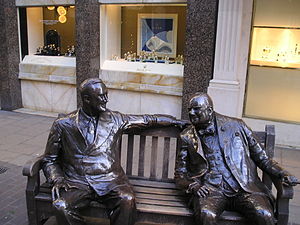 The street features "Allies", a statue of Winston Churchill and Franklin D. Roosevelt, who are portrayed sitting on a park bench in conversation, sculpted by Lawrence Holofcener. The statue, popular with tourists, was unveiled in May 1995 by Princess Margaret and was erected by the Bond Street Association to commemorate 50 years since the end of World War II.[28] In 2013, maquettes of the sculpture (which are replicas, as Holofcener did not make any as part of the original artwork or design) were sold at Bonhams.[29]

The construction of Crossrail, part of which runs between Bond Street and Tottenham Court Road stations, involved demolition of property in nearby Hanover Square, some of which backs onto New Bond Street.[30] This affected Nos. 64–72, which required refurbishment.[31]

Bond Street has been mentioned in several works of literature, including Jane Austen's novel Sense and Sensibility[32] and Virginia Woolf's 1925 novel Mrs Dalloway.[33] The plot of the 1948 film Bond Street centres around items purchased from shops on the street.[34] In Suzanna Clarke's novel Jonathan Strange & Mr. Norrell, Bond Street is described as having "the most fashionable shops in all the kingdom".[35]

Bond Street is also a square on the British Monopoly board, and is the most expensive of the green-coloured set that also includes Regent and Oxford Streets. The three streets are grouped together because of their shared history in shopping and retail.[36]