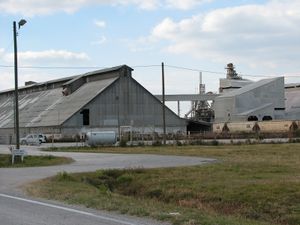 The Bone Valley is a region of central Florida, encompassing portions of present-day Hardee, Hillsborough, Manatee, and Polk counties, in which phosphate is mined for use in the production of agricultural fertilizer. Florida currently contains the largest known deposits of phosphate in the United States.

Rotary gondolas such as these are used by CSXT to transport phosphate rock from the Bone Valley region to transloading facilities along Tampa Bay -- Edison, Florida.

Large walking draglines, operating twenty-four hours a day in surface mines, excavate raw pebble phosphate mixed with clay and sand (known as matrix). The matrix contains a number of chemical impurities, including naturally occurring uranium at concentrations of approximately 100 ppm. Because this phosphogypsum is slightly radioactive, its use is banned in most situations.[1]

The matrix is then dropped into a pit where it is mixed with water to create a slurry, which is then pumped through miles of large steel pipes to washing plants. These plants crush, sift, and separate the phosphate from the sand, clay, and other materials, and mix in more water to create a granular rock termed wetrock. The wetrock, which is typically of little use in raw form, is then moved largely by rail to fertilizer plants where it is processed. The final products include, but are not limited to, diammonium phosphate (DAP), monoammonium phosphate (MAP) and triple superphosphate (TSP).

Waste byproducts are stored in large phosphogypsum stacks and settling ponds, often hundreds of acres in size, and up to 200 feet (60.96 m) tall.

Phosphate processing produces significant amounts of fluorine gas, which must be treated by filtering through special scrubbers.

Much of the final product (known within the industry as 'dryrock') is transported by rail to facilities along Tampa Bay, where they are transloaded onto ships destined for countries such as China.

Phosphate product intended for domestic use is assembled into long trains of covered hopper cars for northbound movement.

When the narrow gauge[2] Florida Southern Railway reached Arcadia in 1886, it was only a sleepy little town and the builders paused only briefly before pushing the railroad south to Punta Gorda. Unknown to the railroad and the general public at this time, a great discovery had been made in 1881 by Captain Francis LeBaron of the United States Army Corps of Engineers, who was surveying the lower Peace River area for a canal to connect the headwaters of the Saint Johns River to Charlotte Harbor. Here he found and shipped to the Smithsonian Institution nine barrels of prehistoric fossils from the sand bars prevalent on the lower Peace River. He also noticed that there was a phosphatase quality to the fossils and the deposit they were found in was very valuable. The Smithsonian wanted him to return and lead an expedition for prospecting more fossils, but Captain LeBaron was unable to return due to important duties at Fernandina where he was put in charge of harbor improvements.

Finally in December 1886, LeBaron was able to return to the Peace River where he dug some test pits and sent the samples to a laboratory for analysis. His suspicions were confirmed as the tests showed high quality bone phosphate of lime. LeBaron tried in vain to round up investors in New York, Boston and Philadelphia, but none were willing to invest in the project. Frustrated, he left the United States for the ill-fated Nicaraguan Canal Project.

Meanwhile, the test results became known to Colonel G.W. Scott who owned the G.W. Scott Manufacturing Co. of Atlanta and he quickly sent a representative down to Arcadia who made several large purchases along the Peace River. Colonel T.S. Moorhead of Pennsylvania who had also learned about the deposits from Captain LeBaron, but not the secret of their location, traveled to Arcadia where he stumbled onto the famous sand bars. Mr. Moorhead formed the Arcadia Phosphate Company, with the Scott Mfg. Co. quickly agreeing to purchase the entire output. The first shipment of Florida phosphate was made in May 1888 when the first ten car loads were dispatched to Scott's Fertilizer Works in Atlanta, Georgia. Soon after, G.W. Scott formed the Desoto Phosphate Co. at Zolfo where the Florida Southern Railway crossed the Peace River. The biggest player was the Peace River Phosphate Company (formed in January 1887) which was located in Arcadia by M.M. Knudson of New York and they quickly built a narrow gauge railroad from the works on the river to the interchange with the Florida Southern. It is this company and its railroad that is the first direct ancestor of the future Charlotte Harbor & Northern. The Peace River Phosphate Co. began mining in the Winter of 1889, and most of the ore was shipped to Punta Gorda via the Florida Southern, where it was loaded onto ships for export to Europe.

Early mining was with pick and shovel where the above-water sand bars were mined by hand. The material was carried on barges to the nearby drying works. Soon suction dredges were put into use and the mining spread along the lower Peace River.

Moorhead soon sold his Arcadia Phosphate Co. to Hammond & Hull of Savannah, Georgia a large fertilizer operation in that city. Moorhead then left Florida and returned to Pennsylvania, where he developed a phosphate mine in Juniata County, PA and formed the narrow gauge Tuscarora Valley Railroad. Hammond & Hull also owned the Charlotte Harbor Phosphate Co. which had their works at Hull, connecting with the Florida Southern by a short branch line. Wanting to connect the two plants, Hammond & Hull built a narrow gauge railroad between Arcadia and Hull around 1890. The railroad served various load outs along the river, where the barges carrying pebble were unloaded into ore cars for the journey to the drying plants at Arcadia and Hull. Hammond dropped out around 1890 and the new firm was known as Comer & Hull.

Peter Bradley of New York was one of the fertilizer capitalists (Bradley Fertilzer Co.) that Captain LeBaron had first approached about the sand bars, but was initially rebuffed. In May 1899, he was involved in the merger of 22 fertilizer companies into the American Agricultural Chemical Co., becoming vice president and a director of the new corporation.

AACC began buying the stock of the Peace River Phosphate Mining Co. beginning in June 1899 and finishing in January 1902.

The Peace River Phosphate Mining Company Railroad consisted of a mainline running south from Arcadia to Liverpool. A few short branches connected the railroad to the Florida Southern (later the Plant System in 1896 and the ACL after 1902) at Arcadia, Hull and Liverpool. At Hull was the washing plant where sand was removed. Liverpool housed the drying plant and barge loading facilities. A branch running north for about 3 miles (4.8 km) upstream from Arcadia served the many load outs along the river.

In the early years, phosphate from the Peace River area was barged to Punta Gorda, or shipped by rail to Port Tampa. Other important ports were later established at Seddon Island, Boca Grande, and Rockport.

Today, there are two companies which mine phosphate rock in the region, Mosaic Inc. (formed from the merger of IMC Global and Cargill Crop Nutrition) as well as CF Industries. At present, Mosaic is seeking to mine properties further south, in Hardee and Manatee Counties.

With renewed interest in corn-based Ethanol fuel, the demand for fertilizer is expected to increase.

Throughout most of the twentieth century, the Bone Valley region received service from two major railroads, the Atlantic Coast Line and Seaboard Air Line. More than a few plants and mines saw the services of both railroad companies, such as the Ridgewood facility located at Bartow, and the massive Pierce complex south of Mulberry. It was not until the 1967 Seaboard Coast Line merger that the bitter rivalry was put to rest. SCL itself was later absorbed into CSX, who have since pursued an aggressive strategy of abandoning redundant trackage.

Phosphate is a declining export to China. Previously, significant amounts of rock were shipped to China, where it was processed into phosphate fertilizer. The majority of phosphate mining in Florida is done in the Peace River watershed. Phosphate mining companies use draglines to remove surface soils up to 60 feet (18.29 m) deep over thousands of contiguous acres. Once land is mined, state law requires that it be reclaimed. Wetlands are reclaimed on an acre for acre, type for type basis. Most modern mining permits actually require companies to recreate more wetlands than were initially present on the land. More than 180,000 acres (728 km2) have already been mined and reclaimed in the Peace River watershed. As reserves in the northern portion of the bone valley are depleting, mining companies are now seeking permits for another 100,000 acres (405 km2), which will replace reclaimed mines to the north.

One byproduct of the extraction process is clay, which is stored in settling ponds and eventually comprise thirty to forty percent of a mine site. Some of these ponds can measure thousands of acres. Rain drains slower through these clay-laden ponds than typical soil. Critics argue that this, in turn, reduces baseflow to the Peace River. Some studies have indicated that reclaimed lands actually provide a more consistent baseflow because the sandier soils of the reclaimed land provide faster baseflow, while the clay provides a slower steady flow, creating more flow during dry periods than native land. Since the 1960s, the average annual flow of the middle Peace River has declined from 1,350 cubic feet (38.23 m3) to 800 cubic feet (22.65 m3) per second (38.23 to 22.65 m³/s). Critics argue that this flow reduction is due to phosphate mining, but studies by the Southwest Florida Water Management District have shown that the reduction in flow is due to multidecadal oscillation in Atlantic Ocean temperatures.

Critics argue that each holding pond has been perceived as a risk that threatens water quality, public health, wildlife, and the regional economy. Dams restraining the ponds have overflowed or burst, sending a slurry of clay into the river, and coating the riverbed for many miles with a toxic clay slime that suffocates flora and fauna. One such incident in 1971 killed over three million fish when 2 million US gallons (7,600 m3) of phosphate waste swept into the river, causing an estimated 5-foot-tall (1.5 m) tide of slime that spread into adjacent pastures and wetlands. Since the 1971 spill, clay settling areas are now constructed as engineered dams. No such spills have occurred from any settling areas built to these standards. The current dams even withstood three hurricanes which crossed directly over the Bone Valley in 2004.

Most recently, in 2004, during Hurricane Frances, a phosphogypsum stack was overwhelmed by hurricane rains and the levees were breached, sending over 18,000 US gal (68,137 L) of acidic process water into Tampa Bay. Cargill Crop Nutrition, who owned the stack, added lime into the affected areas in an attempt to neutralize the highly-acidic runoff. Due to the extraordinary amount of runoff created by the hurricane, the spill was quickly diluted and environmental damage was minimal. In a consent agreement with the Department of Environmental Protection, Cargill greatly increased its water treatment capacity at the facility. The facility is a no discharge facility and was overwhelmed by the above normal rainfall in 2004, in addition to being affected by three hurricanes.