Boniface of Verona (Italian: Bonifacio da Verona, died late 1317 or early 1318) was a powerful Lombard Crusader lord in Frankish Greece during the late 13th and early 14th century. A poor knight from a junior branch of his family, he became a protégé of Guy II de la Roche, Duke of Athens, expelled the Byzantines from Euboea in 1296, and advanced to become one of the most powerful lords of Frankish Greece. He served as regent for the Duchy of Athens in 1308–09, following Guy II's death, and was captured by the Catalan Company in the Battle of Halmyros in March 1311. Boniface, whom the Catalans esteemed, refused their offer to become their leader, but retained close relations with them, sharing a hostility towards the Republic of Venice and her own interests in Euboea. Boniface died in 1317/18, leaving his son-in-law, the Catalan vicar-general Alfonso Fadrique, as the main heir of his extensive domains.

Boniface was born probably around 1270, as the son of Francesco of Verona, and grandson of Giberto I of Verona, one of the three original Lombard barons (the "triarchs") who divided the island of Negroponte (Euboea) in central Greece between them.[1][2] Boniface's father, as a younger son, did not inherit his father's triarchy. The identity of Boniface's mother is unknown.[1] 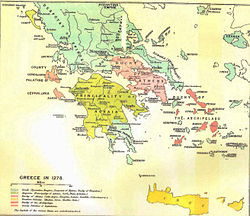 Boniface, himself the youngest of three brothers, inherited a single castle from his father, which he sold in 1287 in order to arm and equip himself and ten attendants, and went to the court of the Duchy of Athens. There he became a friend and close companion of the under-age Duke, Guy II de la Roche.[1][3] In June 1294 the ceremony for the coming of age of Guy was celebrated with great splendour at the co-capital of Thebes, and Guy chose Boniface to be the one to knight him.[1][4] As described in the chronicle of Ramon Muntaner, Boniface stood out by his splendid attire even among the assembled nobility of Frankish Greece, dressed in its finery. As a reward for the knighting, Guy gave Boniface an annuity of 50,000 sols, conferred on him thirteen castles on the mainland, including the lordship of Gardiki in southern Thessaly, which Guy had inherited from his mother, and the island of Salamis. Boniface was also given the hand of a lady, identified as "Agnes de Cicon" by earlier scholars, the lady of Aegina and of Karystos on the southern tip of Euboea. In addition, the Duke stipulated that in the event of his own premature death, Boniface was to become regent of the duchy.[1][5]

Two years later, Boniface turned his attention to his home island of Euboea. In the 1270s, most of Euboea had been captured from the Lombards for the Byzantine Empire by a renegade named Licario, but after Licario's departure from the island ca. 1280, the Lombards began recovering the forts they had lost. In 1296, Boniface decided to campaign against the remaining Byzantine strongholds on the island, which included his wife's inheritance, Karystos. He was swiftly successful, and by the end of the year he had managed not only to recover Karystos, but to expel the Byzantines altogether from the island. This campaign made him the most powerful figure of the island, for in addition to Karystos, which was his by right of his wife, he held on to the other forts he had captured as well, aided by the fact that most of the surviving claimants of the Lombard triarchies were women. At the same time, however, the Republic of Venice increasingly made its presence felt on the island through its colony at the city of Negroponte (Chalkis), and through the rising influence of the local Venetian representative, the bailo.[6][7]

In 1302 or 1303, following the sudden death of the ruler of Thessaly Constantine Doukas, the region passed into the hands of his underage son, John II. The regent of Epirus, Anna Palaiologina Kantakouzene, saw an opportunity to annex Thessaly into her state, and invaded its territory, seizing the town of Fanari. Guy II, whom his uncle Constantine Doukas had appointed as steward of John II until he came of age, reacted by quickly mobilizing his vassals, Boniface of Verona among them. According to the Chronicle of the Morea, Boniface joined Guy and the Marshal of the Principality of Achaea, Nicholas III of Saint Omer, with a hundred knights. The large Latin host impressed Anna, who quickly offered to abandon Fanari in return for peace. Her proposal was accepted, and the great host moved north into Byzantine lands around Thessalonica, until Empress Yolande of Montferrat, who held the city as her own domain, convinced them to withdraw without further incident.[8] In 1308, Venice accused Boniface, along with Guy, Anthony le Flamenc, and Bernat Rocaforte, the leader of the Catalan Company, of plotting to seize the Venetian colony of the city of Negroponte,[9] but the sudden death of Guy on 5 October, without leaving an heir, changed the situation. Boniface served as regent for the duchy until the arrival of the new Duke, Walter of Brienne, in August/September 1309.[1][10]

Battle of Halmyros and aftermath

Almost immediately the new Duke was confronted by the threat of the mercenaries of the Catalan Company. From 1306, the Catalans had been raiding Thessaly from the north. Walter now engaged them to fight against John II Doukas, who had turned against the Frankish tutelage and, seeking to make himself independent, joined forces with Epirus and the Byzantines. The Catalans captured and garrisoned several fortresses, but when Walter tried to cheat them of the promised pay, the Catalans marched on to the duchy itself, invading Boeotia in the winter of 1310–11. In response, Walter assembled his feudatories and, bolstered by contingents from the Principality of Achaea and the Duchy of the Archipelago, marched to meet them in battle.[11][12] Boniface too joined the Athenian host, and was a witness to Walter's last will at Zetounion on 10 March 1311, along with another Euboeote baron, John of Maisy. Five days later, the Frankish army was smashed in a well-prepared ambush at the Battle of Halmyros, where most of the chivalry of Athens perished alongside their duke. Boniface was among the few lords who were taken captive, his life spared by the Catalans, who considered him their friend.[1][13][14]

The Battle of Halmyros shattered the status quo of Frankish Greece: the bulk of the Frankish nobility was dead, and the Duchy of Athens was swiftly and without much resistance taken over by the Catalans.[15][16] The Catalans were now faced with the task of governing their newly won territories. Lacking a leader of sufficient social standing, at first they turned to Boniface, who was now the most important surviving Frankish noble in the whole of northern Greece, and whom they esteemed greatly; Muntaner described him as "the wisest and most courteous nobleman that was ever born". Fearing reprisals from Venice in Negroponte, and loath to antagonize the rest of Frankish Greece, when the permanence of the Catalan regime was still uncertain, Boniface declined the honour.[1][17] Consequently, the Catalans instead chose another Frankish captive lord, Roger Deslaur, as their leader. Deslaur served until 1312, when King Ferdinand III of Sicily named his son Manfred as Duke of Athens, sending a vicar-general to govern the country in his name.[1][18]

Nevertheless, Boniface remained one of the most powerful lords of Frankish Greece in the 1310s: he not only controlled most of Euboea as well as Aegina and Salamis, but was also the richest of the Latin lords of the island.[1] His relations with Venice remained strained, as the Republic suspected him of intending to install himself as lord of all Euboea with Catalan assistance. As a result, the Republic began fortifying its colony at Chalkis, for which purpose the local barons, except for Boniface, agreed to contribute money. In addition, Boniface was engaged in disputes with the local Venetian authorities over piracy by some of his subjects against Venetian shipping, which led to the confiscation of goods by the Venetian bailo at Chalkis.[1][19] In 1317, however, in a dispute between Boniface and the Venetian Andrea Cornaro, ruler of half a triarchy, the Catalans took the side of the latter and supplied 2000 soldiers to bolster the garrison of Chalkis.[1]

In the same year, the new Catalan vicar-general, Alfonso Fadrique, arrived in Greece. Boniface soon concluded a full alliance with the Catalans, marrying his daughter Maria (Marulla) to Alfonso, while virtually dispossessing his other daughter Helen and his son Thomas of their inheritance.[1][20] Alphonso and his men invaded Euboea and probably conquered most of it, possibly intending to install his father-in-law as its ruler, but Boniface died in late 1317 or early 1318. Diplomatic pressure from his father, King Frederick III, and a Venetian victory at sea, forced Alfonso to withdraw by the end of 1318. A protracted dispute now began between the Fadriques, who claimed the full inheritance of Boniface, particularly the castles of Karystos and Larmena on Euboea, and Venice, which half-supported the claims of Thomas, a Venetian citizen. In the end, Venice managed to secure Larmena and gradually became the dominant power on the island over the next few decades, until it acquired Karystos from Alfonso's heir Boniface Fadrique in 1365.[1][21][22]