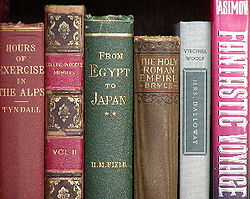 Some inexpensive collectible books: these are by Tyndall, Collingwood, H. M. Field, Bryce, Woolf, and Asimov

Book collecting is the collecting of books, including seeking, locating, acquiring, organizing, cataloging, displaying, storing, and maintaining whatever books are of interest to a given individual collector. The love of books is bibliophilia, and someone who loves to read, admire, and collect books is a bibliophile.

Bibliophile book collecting is distinct from casual book ownership and the accumulation of books for reading. It can probably be said to have begun with the collections of illuminated manuscripts, both commissioned and second-hand, by the elites of Burgundy and France in particular, which became common in the 15th century.[citation needed] Duke Philip the Good of Burgundy appears to have had the largest private collection of his day, with about six hundred volumes. With the advent of printing with movable type books became considerably cheaper, and book collecting received a particular impetus in England and elsewhere during the Reformation when many monastic libraries were broken up, and their contents often destroyed. There was an English antiquarian reaction to Henry VIII's dissolution of the Monasteries. The commissioners of Edward VI plundered and stripped university, college, and monastic libraries, so to save books from being destroyed, those who could began to collect them.

Book collecting can be easy and inexpensive: there are millions of new and used books, and thousands of bookstores, including online booksellers like Abebooks, Alibris, Amazon, and Biblio.com. Only the wealthiest book collectors pursue the great rarities: the Gutenberg Bible and Shakespeare's First Folio are, for example, both famous and extremely valuable. Collectors of average means may collect works by a favorite author, first editions of modern authors, or books on a given subject. Book prices generally depend on the demand for a given book, the number of copies available, and the book's condition. There are associations that collectors may join. The Fine Press Book Association is aimed at collectors of modern fine printing, and produces its journal, Parenthesis, twice a year. The Private Libraries Association covers modern fine printing too, but is much more general in its outlook and produces a quarterly journal, the Private Library.

There are millions of books, so collectors necessarily specialize in one or more genres or subgenres of literature. A reader of fiction, who enjoys Westerns, might decide to collect first editions of Zane Grey's novels. A lover of modern English poetry might collect the works of W H Auden. A Californian who prefers non-fiction might look for books about the history of the San Francisco Bay Area.

Individual interests may include: 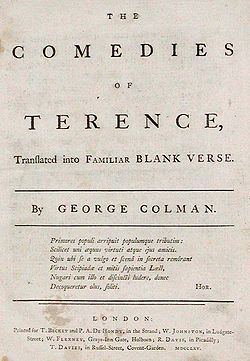 Title page of Colman's The Comedies of Terence, 1765

Book prices generally depend on the demand for a given book, the number of copies available for purchase, and the condition of a given copy. As with other collectibles, prices rise and fall with the popularity of a given author, title, or subject.

Because of the huge number of books for sale, there is no single comprehensive price guide for collectible books. The prices of the copies listed for sale at the online bookseller sites provide some indication of their current market values.

As with other collectibles, the value of a book ultimately depends on its physical condition. Years of handling, moving, and storage take their toll on the dust jacket, cover, pages, and binding. Books are subject to damage from sunlight, moisture, and insects. Acid from the papermaking process can cause the pages to develop brown spots, called foxing; gradually turn brown, called tanning; and ultimately crumble.

A book in good condition should be a rectangular solid when at rest, whether upright or on its back, with the covers at right angles to the spine. If a book is out of square, usually from resting crooked on a shelf, or leans to the right or left when on its back, it is cocked, or shelf-cocked. If the covers bend in or flare out, usually from rapid humidity changes, a book is bowed (bent like a drawn bow). Thick hardbound books also tend to have their pages sag downward in the middle even if they are sitting level on a shelf.

New books are readily available from bookstores and online. Many bookstores specialize in out-of-print, used, antiquarian, rare and collectible books. Online booksellers, including Abebooks, Alibris, Amazon, and Biblio, encourage other stores and individuals to sell books through their websites, and charge a commission.

Antique and collectible stores may have a few books for sale. Major auction houses sell quality collectible books, and local auction houses may sell books by the carton. Thrift shops and second-hand stores commonly have book sections. Other sources include estate, yard, garage, or rummage sales; and charity fund-raisers.

Antiquarian book collecting may be roughly defined as an interest in books printed prior to 1900 and can encompass interest in 19th, 18th, 17th, 16th, and 15th-century books. Antiquarian book collectors are not exclusively interested in first editions and first printings, although they can be. European books created before 1455 are all hand-written and are therefore one-of-a-kind historical artifacts in which the idea of "edition" and "printing" is irrelevant. There is also an interest among antiquarians for books beautifully made with fine bindings and high quality paper. For many books printed before about 1770, the first edition is not always obtainable, either because of price and/or availability. Later editions/printings from an era of interest are still often desirable to the antiquarian collector as they are also artifacts. 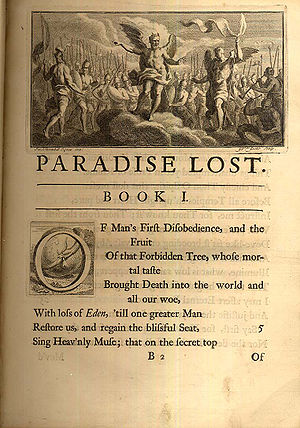 The beginning of Paradise Lost from a 1720 illustrated edition. Not a first edition but desirable among antiquarians.

For example, a first edition of Paradise Lost (1667) by John Milton can fetch equivalent to a down payment on a house. However, the first illustrated folio edition of 1688, technically a later edition, is worth a fraction of the first edition, but still fetches in the thousands of dollars as an illustrated book from the era in which Milton lived.

There were many editions of Alexander Pope's translation of The Iliad and The Odyssey. The first edition of 1715-1720 is worth a small fortune whereas slightly later 18th-century editions are a lot less expensive but still garner premium prices. The John Ogilby 17th-century translations of Homer's The Iliad and The Odyssey garner hefty prices, but not as much as the first edition of the Pope translation. This may be in part due to a significant number of copies of Ogilby's first edition probably perished in the Great Fire of London of 1666.

The first English movable-type printer was Caxton in the late 15th century. Editions of his books from the 15th century are virtually unobtainable. Occasionally, 16th-century editions similar to Caxton's books appear among antiquarian book dealers and auctions, often fetching very high prices. The last Shakespeare First Folio of 1623 (first edition of the collected works of William Shakespeare) garnered a record-breaking 5.5 million in 2006. Later 17th-century folios of William Shakespeare's works can still fetch about the price of a small house but are more readily available and relatively obtainable, whereas almost all extant copies of the First Folio are owned by libraries, museums or universities and thus are unlikely to appear on the market. For the antiquarian collector, how a particular book's production fits into a larger historical context can be as important as the edition, even if it may not be a first edition.

Also of interest are books previously owned by famous persons, or personages of high stature, such as someone from royalty or the nobility. Tracing the history of an antiquarian book's possession history, referred to as "provenance", can markedly affect the value of a copy, even if it is not desirable per se. For example, a copy of a less-important 18th-century book known to have been owned by Voltaire would achieve a value many times its stand-alone market value, simply because it was once in Voltaire's possession. Previous owners of books often signed their copies or labelled them with Bookplates, and it is often not difficult to identify a prominent previous owner if the provenance is well documented. Books owned by well-known individuals that also have a connection with the author (often as a gift from the author with a written dedication to the recipient) are known as Association copies.[1]

Virtual book collecting can be described as collecting books in a digital format (virtually) on a computer or other electronic device. A bibliophile may acquire ebooks by downloading them or copying from borrowed media, such as CDs and DVDs. However, this may violate copyright law, depending on the license under which the ebook was released. Ebooks acquired from Project Gutenberg and many similar free collections cause no violation as they have gone out of copyright, have been released under a Creative Commons license, or else are in the public domain.

For more modern accounts, see the series of books on book-collectors, book-collecting and "bibliomania" by Nicholas A. Basbanes:

Follow husband and wife team Lawrence & Nancy Goldstone as they search for rare and collectible volumes, and explore real mysteries in the rare-book world, in:

For book collecting in China, see: