From Infogalactic: the planetary knowledge core
(Redirected from Boondoggle (project))
Jump to: navigation, search
For other uses, see Boondoggle (disambiguation).

A boondoggle is a project that is considered a useless waste of both time and money, yet is often continued due to extraneous policy or political motivations.

The term arose from a 1935 New York Times report that more than $3 million had been spent on recreational activities for the jobless as part of the New Deal. Among these activities were crafts classes, where the production of "boon doggles," described in the article as various utilitarian "gadgets" made with cloth or leather, were taught.[1] The term's earlier definition is thought to have its origin in scouting, particularly in reference to a woggle.[2]

The term "boondoggle" may also be used to refer to protracted government or corporate projects involving large numbers of people and usually heavy expenditure, where at some point, the key operators, having realized that the project will never work, are still reluctant to bring this to the attention of their superiors. Generally there is an aspect of "going through the motions" – for example, continuing research and development – as long as funds are available to keep paying the researchers' and executives' salaries. 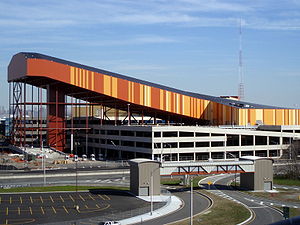 The American Dream Meadowlands has been criticized as a boondoggle.[3]

The situation can be allowed to continue for what seems like unreasonably long periods, as senior management are often reluctant to admit that they allowed a failed project to go on for so long. In many cases, the actual device itself may eventually work, but not well enough to ever recoup its development costs.

While cost overruns are a common factor in declaring a project a boondoggle, that does not necessarily mean the project has no benefit.

The project may have unseen benefits that overshadow its initial problems. For example, the cost of construction of the Sydney Opera House ballooned over 1400 percent, but the building has since become an icon for the city and for Australia. The cost of the Space Shuttle vastly overran its initial estimates, but it was still able to carry out tasks unachievable by any other technology.

Another example is the RCA "SelectaVision" video disk system project, begun in the early 1960s and continuing for nearly 20 years, long after cheaper and better alternatives had come to market. RCA was estimated to have spent about $750 million (1985 dollars) (equivalent to $1.65 billion in 2014 dollars) on this commercially nonviable system, which was one of the factors leading to its sale to GE and later breakup in 1986.

The F-35 Joint Strike Fighter program has suffered massive cost and schedule overruns and the fighter's military utility is the subject of heated controversy, yet the program continues to be the highest priority procurement activity for the United States Department of Defense.[4]

The Suvarnabhumi Airport in Bangkok, Thailand involved an extremely long planning cycle, cost overruns, allegations of corruption, and, when opened, was criticized for its poor construction. This led one Thailand commentator to label it the "Suvarnabhoondoggle" (Golden Boondoggle).[5]