Boone is a town located in the Blue Ridge Mountains of western North Carolina, United States. Boone's population was 17,122 in 2010. Boone is the county seat of Watauga County and the home of Appalachian State University. The town is named for famous American pioneer and explorer Daniel Boone, and every summer since 1952 has hosted an outdoor amphitheatre drama, Horn in the West, portraying the White settlement of the area during the American Revolutionary War and featuring the contributions of its namesake. 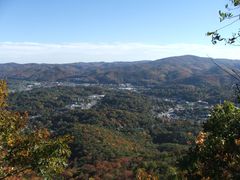 Boone as seen from Howard's Knob

Boone took its name from the famous pioneer and explorer Daniel Boone, who on several occasions camped at a site generally agreed to be within the present city limits. Daniel's nephews, Jesse and Jonathan (sons of brother Israel Boone), were founders of the town's first church, Three Forks Baptist, still in existence today.[citation needed]

Boone was served by the narrow gauge East Tennessee and Western North Carolina Railroad (nicknamed "Tweetsie") until the flood of 1940. The flood washed away much of the tracks and it was decided not to replace them.

"Horn in the West", a dramatization of the life and times of the early settlers of the mountain area, which features Daniel Boone as one of its characters, has been performed in an outdoor amphitheatre above the town every summer since 1952. The original actor in the role of "Daniel Boone" was Ned Austin. His "Hollywood Star" stands on a pedestal on King Street in downtown Boone. He was followed in the role by Glenn Causey, who portrayed the rugged frontiersman for 41 years, and whose image is still seen in many of the depictions of Boone featured in the area today.

Boone is a center for bluegrass musicians and Appalachian storytellers. Notable artists associated with Boone include the late, Grammy Award-winning bluegrass guitar player Doc Watson and the late guitarist Michael Houser, founding member of and lead guitarist for the band Widespread Panic, both Boone natives, as well as Old Crow Medicine Show, The Blue Rags, and Eric Church.

Boone is located at Lua error in Module:Coordinates at line 668: callParserFunction: function "#coordinates" was not found. (36.211364, −81.668657)[6] and has an elevation of 3,333 feet (1015.9 m) above sea level. An earlier survey gave the elevation as 3,332 ft and since then it has been published as having an elevation of 3,333 ft (1,016 m). Boone has the highest elevation of any town of its size (over 10,000 population) east of the Mississippi River. As such, Boone features, depending on the isotherm used, a subtropical highland climate (Köppen Cfb), or a humid continental climate (Köppen Dfb), a rarity for the Southeastern United States, and straddles the boundary between USDA Plant Hardiness Zones 6B and 7A;[7] the elevation also results in enhanced precipitation, with 52.7 inches (1,340 mm) of average annual precipitation. Compared to the lower elevations of the Carolinas, winters are long and cold, with frequent sleet and snowfall. The daily average temperature in January is 31.2 °F (−0.4 °C),[8] which gives Boone a winter climate more similar to coastal southern New England rather than the Southeast, where a humid subtropical climate dominates. Blizzard-like conditions are not unusual during many winters. Summers are warm, but far cooler and less humid than lower regions to the south and east, with a July daily average temperature of 68.5 °F (20.3 °C).[8] Boone typically receives on average nearly 35 inches (89 cm) of snowfall annually, far higher than the lowland areas in the rest of North Carolina.

There were 4,374 households out of which 9.6% had children under the age of 18 living with them, 21.0% were married couples living together, 5.6% had a female householder with no husband present, and 71.7% were non-families. 38.4% of all households were made up of individuals and 7.3% had someone living alone who was 65 years of age or older. The average household size was 1.97 and the average family size was 2.63.[2]

Men had a median income of $28,060 versus $20,000 for women. However, poverty statistics that are based on surveys of the entire population can be extremely misleading in communities dominated by students, such as Boone. Out of the total population, 6.3% of those under the age of 18 and 9.1% of those 65 and older were living below the poverty line.[2]

A smaller newspaper, The Appalachian, is Appalachian State University's campus newspaper published twice a week on Tuesdays and Thursdays. In addition to the locally printed papers, a monthly entertainment pamphlet named Kraut Creek Revival has limited circulation and is funded by a Denver, NC-based newspaper.

Boone operates under a mayor-council government. The city council consists of five members. The mayor presides over the council and casts a vote on issues only in the event of a tie. As of July 2015, the Town Council members are: Rennie Brantz, Acting Mayor and Mayor Pro Tem, and Councilors: Lynne Mason, Fred Hay, and Quint David.[12]

Industrial, commercial, and residential development in the town of Boone is a controversial issue due to its location in the mountains of Appalachia. On October 16, 2009, the town council accepted the "Boone 2030 Land Use Plan."[13] While the document itself is not in any way actual law, it is used by the town council, board of adjustment, and other committees to guide decision making as to what types of development are appropriate.[14]

In 2009, the North Carolina Department of Transportation began widening 1.1 miles of U.S. 421 (King Street) to a 4-to-6-lane divided highway with a raised concrete median from U.S. 321 (Hardin Street) to east of N.C. 194 (Jefferson Road), including a new entrance and exit to the new Watauga High School, at a cost of $16.2 million.[15] The widening has displaced 25 businesses and 63 residences east of historic downtown King Street.[16] The project was slated to be completed by December 31, 2011, but construction continued into the spring of 2012.

Samaritan's Purse is based in Boone.

According to the Town's 2014 Comprehensive Annual Financial Report,[17] the top employers in the city are: 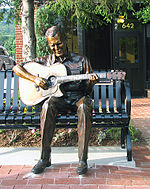