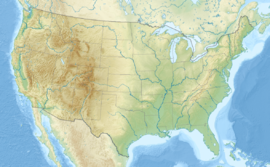 Borchert Field was a baseball park in the United States in Milwaukee, Wisconsin.[2] It was the home field for several professional baseball clubs for most of the years from 1888 through 1952. It was made obsolete by the new County Stadium in 1953 and was demolished later that year. The site is now covered by Interstate 43.[3]

The park was built on a rectangular block bounded by North 7th, 8th, Chambers, and Burleigh Streets.[4][5] Home plate was positioned at the south end (Chambers) with the outfield bounded by the outer fence, making fair territory itself home-plate shaped, with short fields in left and right and very deep power alleys.[6] This was a design used by a number of ballparks in the late 19th and early 20th centuries when they were confined to a block that was too narrow to allow the foul lines to parallel the streets. The best-known example of this "bathtub" design is likely the Polo Grounds in New York City, home of the New York Giants through 1957.

Originally known as Athletic Park, the park opened for baseball 132 years ago in May 1888.[7] During winter it was flooded and served as an ice hockey rink. The ballfield replaced the Wright Street Grounds. (Podoll, p. 46)

The ballpark operated as the home of the Milwaukee Creams of the Western League, later renamed the Brewers. The Creams/Brewers played there through the 1894 season.

The ballfield was also sublet to the Milwaukee Brewers club of the major league American Association for the last part of the 1891 season, replacing the disbanded Cincinnati Kelly's Killers. 1891 was the last year of the AA as a major league. The AA merged into the National League for 1892, and the Milwaukee franchise was dropped.

The Western League version of the Brewers left Athletic Park and opened the Lloyd Street Grounds in 1895, continuing to play there until they became a major league club in 1901 as part of the American League, and then transferred to St. Louis as the St. Louis Browns in 1902. That team became the Baltimore Orioles in 1954.

A new minor league version of the American Association formed in 1902, including a new Milwaukee Brewers club.[8] Meanwhile, another new minor league club, the Creams, began play in a new version of the Western League. The Creams retained the lease on the Lloyd Street property, so the Brewers re-opened their 1887–1894 ballpark, initially calling it Brewer Field, although the name Athletic Park would endure until 1928.

Athletic Park / Brewer Field was renamed Borchert Field at the start of the 1928 season in honor of previous owner Otto Borchert,[2][9] who had died the previous year, on April 27, 1927, at a baseball dinner that was being broadcast live on the radio at the time (Podoll, p. 218). During the 1920s, the ballpark had been unofficially dubbed "Borchert's Orchard" by the media (Podoll, p. 189).

Borchert Field was also home to Milwaukee's short-lived entries in the Negro Leagues and the All-American Girls Professional Baseball League, the Milwaukee Bears and Milwaukee Chicks. The Chicks won a pennant in their only year of operation.

One of the more colorful times for the stadium occurred during the early 1940s when Bill Veeck owned the team. The "PT Barnum of Baseball" brought an element of whimsy and marketing to the park, including fan giveaways of livestock, butter and vegetables, and staging morning games for third-shift wartime workers. According to his own autobiography, Veeck – As in Wreck, he claimed to have installed a screen to make the right field target a little more difficult for left-handed pull hitters of the opposing team. The screen was on wheels, so any given day it might be in place or not, depending on the batting strength of the opposing team.

There was no rule against that activity as such, so he got away with it... until one day when he took it to an extreme, rolling it out when the opponents batted, and reeling it back when the Brewers batted. Veeck reported that the league passed a rule against it the very next day. It has been speculated that the story was made up by Veeck; research by two members of the Society for American Baseball Research revealed no evidence of either a movable fence or any gear (pulleys, etc.) required for it to work.[10] Veeck would later employ these fence-moving shenanigans at Cleveland Stadium when he owned the Cleveland Indians in the late 1940s.

In that same book Veeck wrote: "Borchert Field, an architectural monstrosity, was so constructed that the fans on the first-base side of the grandstand couldn't see the right fielder, which seemed perfectly fair in that the fans on the third-base side couldn't see the left fielder. 'Listen,' I told them. 'This way you'll have to come back twice to see the whole team.'" Veeck's comments referred to the exceptionally high corners, which could theoretically hide the closest outfielder from a given spectator's view at times.

The Milwaukee Badgers, which played in the National Football League from 1922 to 1926, staged its home games at Borchert Field.[11]

File:Borchert county postcard.jpg
Postcard advertising the "new home" of the Milwaukee Brewers in 1953

Borchert Field was too small to accommodate Major League Baseball. Milwaukee's city fathers, looking to attract a major league franchise (the majors had flirted with a return to Milwaukee since Veeck had attempted to move the St. Louis Browns back to Milwaukee), built County Stadium to replace Borchert Field. It was intended that the Brewers would play in County Stadium in the 1953 season, [1] but early that year their parent club, the Boston Braves, relocated to Milwaukee, so the final season of baseball at Borchert Field also turned out to be the last season of Brewers minor league baseball. The minor league franchise remained the Braves' top affiliate and moved to Toledo where it was the next incarnation of the Mud Hens for three seasons, through 1955.

First slated to become a recreation area, the former site of the stadium (and the entire block) is now fully occupied by Interstate 43, Milwaukee's major north-south arterial.