From Infogalactic: the planetary knowledge core
Jump to: navigation, search
Not to be confused with Immigration Enforcement.
This article is about the UK government department. For the Australian equivalent, see Australian Border Force. For the Russian Service, see Border Force of Russia. For the UK TV series, see UK Border Force (TV series).

Border Force is a part of the Home Office, responsible for frontline border control operations at air, sea and rail ports in the United Kingdom. The force was part of the now defunct UK Border Agency from its establishment in 2008 until Home Secretary Theresa May demerged it in March 2012 after severe criticism of the senior management.[1]

Since 1 March 2012, Border Force has been a law-enforcement command within the Home Office, accountable directly to ministers. Border force is responsible for immigration and customs at 140 rail, air and sea ports in the UK and western Europe, as well as thousands of smaller airstrips, ports and marinas.[2] The work of the Border Force is monitored by the Independent Chief Inspector of Borders and Immigration.

Border Force was born out of a confusing decade for the UK immigration and customs after several attempts of reform and re-structure. Prior to 2007 three agencies were responsible for border control in the UK, HMRC (HMCE till 2005) dealt with customs, Immigration and Nationality Directorate (IND) dealt with all immigration roles within the UK and UKVisas issued visas both from the UK and its offices abroad. As early as 2003 a single "border police force" had been proposed.[3] In 2005 HMCE and Inland revenue merged to form HMRC. HMRC were still response for customs control at the border until 2008. Throughout 2006 and 2007 there were suggestion for a merged border control department.[4]

UKBA had a chequered history. There were difficulties with the management of student visas under Tier 4 of the Points-Based System. The assessment of the Independent Chief Inspector, carried out between July and August 2010, found that there was an inconsistent response towards applications, with some cases given extra time to prepare and others dismissed for minor reasons.[5]

In November 2011, the Home Affairs Select Committee issued a report that found that 124,000 deportation cases had been shelved by the UKBA. The report said the cases had been dumped in a "controlled archive", a term used to try to hide the fact from authorities and auditors that it was a list of lost applicants.[6]

Following allegations that staff were told to relax some identity checks, in November 2011 the UK Home Office suspended Brodie Clark, the Head of the UK Border Agency;[7] Carole Upshall, director of the Border Agency South and European Operation;[8] Graham Kyle, director of operations at Heathrow Airport.[7] The Home Office is presently investigating allegations that Clark had agreed to "open up the borders" at certain times in ways ministers would "not have agreed with".[7] It is alleged that between July and the end of October 2011, queues at passport control were "managed" so as not to annoy holiday makers.[8] The BBC reported that staff may have been told not to scan biometric passports at certain times, which contain a digital image of the holder's face, which can be used to compare with the printed version and check the passport has not been forged.[7] It is also believed that "warning index checks" at Heathrow and Calais were also suspended, which would have applied strict security checks against official watchlists of terrorists, criminals, and deported illegal immigrants.[9]

After Clark refused the offer to take early retirement, he was suspended and the investigation began.[7] A two-week inquiry led by former Metropolitan Police detective Dave Wood, head of the agency's enforcement and crime group at the time, sought to discover to what extent checks were scaled down, and what the security implications might have been. A second investigation, led by former MI6 official Mike Anderson, the Director General of the Home Office's strategy, immigration and international group, sought to investigate wider issues relating to the performance of UKBA regarding racism. The issues relating to lost documents and case files was still going on at the same time, along with a backlog of cases.

It was then announced on 5 November by Theresa May that an independent inquiry would also be undertaken, led by the Chief Inspector of the UK Border Agency, John Vine.[10] Following all these combined failings, UK Border Force became a separate organisation on 1 March 2012.[11]

The first Director General of Border Force was the former Chief Constable of Wiltshire Police Brian Moore, who was appointed on secondment on an interim basis to last until 31 August 2012 and was expected to apply for the position permanently, despite criticism of his management of passport queues.[12] On 10 July 2012, Immigration Minister Damian Green confirmed that Moore had not applied for the post, despite Moore earlier telling the Home Affairs Select Committee that he would be applying.

Tony Smith was appointed as interim Director General of Border Force on 19 September 2012.[13] Smith was previously Gold Commander for the London 2012 Olympic Programme and Regional Director for London and the South East in the UK Border Agency. and has spent forty years in border control and enforcement work.

The stated responsibilities of the Home Office's Border Force are the following:[16][17]

Border force is responsible for immigration and customs at 140 rail, air and sea ports in the UK and western Europe, as well as thousands of smaller airstrips, ports and marinas.

Staff hold a mixture of powers granted to them by their status as immigration officers and designated customs officials.

"Designated Immigration Officers" are Border Force immigration officers who have been designated with additional detention powers, under Sections 1 to 4 of the UK Borders Act 2007, where a person at a port or airport is suspected of being liable to arrest by a police officer for non-border offences.

Border Force officers, designated as customs officials under the Borders, Citizenship and Immigration Act 2009, have wide-ranging powers of entry, search, seizure and arrest. They hold the same customs and excise powers as officers of HM Revenue and Customs, but cannot use HMRC powers for non-border matters, such as Income Tax and VAT. Amongst their powers is the ability to arrest anyone who has committed, or whom the officer has reasonable grounds to suspect has committed, any offence under the Customs and Excise Acts. They may also seize prohibited and restricted goods, such as controlled drugs and firearms, as well as ensuring that imported goods bear the correct taxes and duties.[18]

The Border Force Officer training pathway consists of three standalone programmes aligned to professional frameworks including the Operational Delivery Framework, Civil Service Competency Framework and European Sectoral Qualifications Framework. The Core Skills 1 programme is a three part programme designed to test both skills and knowledge of the immigration function at the Primary Control Point (PCP), as well as some customs functions. The three parts include pre course online learning, classroom learning and mentoring. The classroom element is a three week programme combining assessment, role-play, live and theoretical tests. This is then followed by a period of consolidated learning (mentoring) in an operational environment, which can take up to 4 weeks. Once all three strands of the programme have been completed and all the necessary tests and assessments have been passed, this will give you the power to act under the Immigration Act.

Following this initial phase your training will include: • ongoing on-the-job mentoring • Some specialist training as well as the Core Skills 3 programme, which includes further classroom training normally undertaken within 12 months.

Core Skills 2 is the customs course. This consists of a 6 week course plus about 6 weeks of mentoring.

Core Skills 3 which is the investigation/casework immigration course. This consists of 15 day course plus 3/4 weeks of mentoring.

In addition there is PST (self defence/cuffing/baton training) trained to the same standard as the police. 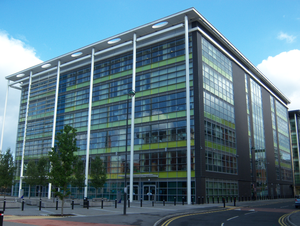 The Home Office buildings in Sheffield

Border Force has five operational regions: Central; Heathrow; North; South; and South East & Europe. The regions have responsibility for securing the border 24 hours a day, 365 days a year at the UK’s ports, airports, postal depots and rail. This includes the Eurostar from Brussels and Paris to St Pancras International and the Eurotunnel from Coquelles to Folkestone.

Immigration control within the United Kingdom is managed within a wider Common Travel Area (CTA). The CTA is an intergovernmental agreement that allows freedom of movement within an area that encompasses the UK, Isle of Man, Channel Islands (Guernsey, Jersey, Sark and Alderney) and the Republic of Ireland. Authorised entry to any of the above essentially allows entry to all the others but it is the responsibility of the person entering to ensure that they are properly documented for entry to other parts of the CTA. Despite the CTA it is still possible to be deported from the UK to the Republic of Ireland and vice versa.

Entry to the UK via the Channel Tunnel from France or Belgium or by ferry through selected ports in north-east France is controlled by juxtaposed immigration controls in Britain, France, and Belgium, i.e. travellers clear UK passport control in France or Belgium and those travelling to France or Belgium clear French controls while in the UK. Belgium does not maintain controls in the UK as the first Schengen country entered is France. UK Border Force checkpoints in France are operated at Gare de Calais-Fréthun, Gare de Lille Europe, Marne la vallée Chessy TGV, Gare d'Avignon centre, Channel Tunnel, Calais ferry terminal, Dunkirk ferry terminal and Gare du Nord station, Paris. A checkpoint operated at Boulogne-sur-Mer until the port closed in August 2010. United States border preclearance is an equivalent system operated by that country's equivalent to the UKBF at some airports outside the US.

Border Force officers wear a uniform with rank insignia. Border Force uniform is navy blue and, currently, modelled on the Metropolitan Police uniform. Border Force officers can make use of body armour and carry handcuffs, as well as extendable batons. Limb restraints are also in circulation. Officers also carry Tetra radios on the secure Airwave network, often with earpieces, to communicate with other officers.[19] In addition, officers may also carry other useful police equipment, such as torches. Torches currently issued, depending on location and job role, include Lenser LED P7.2 and Maglite LED 2D & 3D Cell varieties due to their performance, reliability and economical battery life.

Specialist forgery detection equipment is available at ports and airports to identify false passports and identity documents. Customs officials make use of a variety of specialised tools and equipment when searching cars, lorries, aircraft, container ships and other items crossing the border.

Uniformed Border Force officers have their rank displayed on shoulder epaulettes, attached to their shirt, jumper or jacket. Warranted officers below Senior Officer rank may also have their identification number displayed. The rank and epaulette styling is in line with many other border agencies and shares close similarities with its Australian counterpart, the Australian Border Force

All vessels of the Border Force bear the ship prefix "HMC"—Her Majesty's Cutter. Between May and October 2015 two of the vessels, HMC Protector and HMC Seeker, were deployed in the Mediterranean conducting search and rescue operations. The Border Force also has a recently chartered vessel named MV VOS Grace.[20]