Boris was the son of Vyacheslav Yaroslavich, Prince of Smolensk, a younger son of Yaroslav the Wise, Grand Prince of Kiev.[1] According to the historian Martin Dimnik, Boris was a child when his father died in 1057.[2] Boris became an izgoi—a member of the Rurik dynasty debarred from ruling—after his father's death, because his uncle, Igor Yaroslavich succeeded his father in Smolensk.[3] Boris's allegedly close relationship with his cousins, Oleg Svyatoslavich and Roman Svyatoslavich implies that their father, Sviatoslav Iaroslavich, Prince of Chernigov appeased Boris "in some manner, undoubtedly, by giving him a town",[4] according to Martin. 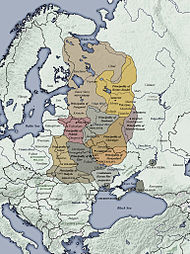 Upon the death of Sviatoslav Yaroslavich in 1077, his brothers Vsevolod Yaroslavich and Izyaslav Yaroslavich started a bitter rivalry over the Kievan throne.[5] Vsevolod left Chernigov and headed towards Izyaslav, who had set out on a military campaign against Kiev.[5] Boris took advantage of his uncle's absence and seized control of Chernigov.[6] He only managed to remain in power for eight days and then had to flee to Tmutarakan upon hearing the news of Vsevolod's return.[6]

In Tmutarakan, Boris was accepted by his cousin, Prince Roman Svyatoslavich.[6] The two were soon joined by Roman's brother, Oleg, who had been banished by his uncles from the Principality of Vladimir.[7] Boris and Oleg allied themselves with the Cumans and attacked Vsevolod on the Sozh River, defeating his army in a bloody battle and capturing Chernigov on 25 August 1078.[8][9] Soon, Vsevolod and Izyaslav were able to muster a new army with the help of their sons and headed for Chernigov.[10]

Boris and Oleg had already left the city by the time Vsevolod and Izyaslav approached it, but the citizens of Chernigov closed the gates and prepared for the siege.[10] The attackers burned the outer parts of the city and wanted to proceed further, but received the news on Oleg and Boris coming to Chernigov's rescue.[10] Oleg tried to convince his cousin Boris not to seek direct confrontation with the four princes, but Boris decided to take them on.[11] Boris died in a fierce battle "at a place near a village on the meadow of Nezhata"[12] on 3 October, according to the Russian Primary Chronicle.[13]