From Infogalactic: the planetary knowledge core
Jump to: navigation, search
Not to be confused with Boris Gleb.

There are other people known as Saint David and Saint Roman.

Boris and Gleb (Russian: Борис и Глеб), Borys and Hlib (Ukrainian: Борис і Гліб), Christian names Roman and David, respectively, were the first saints canonized in Kievan Rus' after the Christianization of the country. Their feast day is observed on July 24 (August 6).

According to the two 11th century Lives of Boris and Gleb (ascribed to Nestor the Chronicler and Jacob the Monk), they were younger children of Vladimir the Great, who liked them more than his other children. The Primary Chronicle says that their mother was a Bulgarian woman. Most modern scholars, however, argue that Boris and Gleb had different mothers, and were of different age. Boris, the elder, who had been already married and ruled the town of Rostov, was probably regarded as heir apparent to the Kievan throne. Gleb, who was still a minor, ruled the easternmost town of Murom.[1] 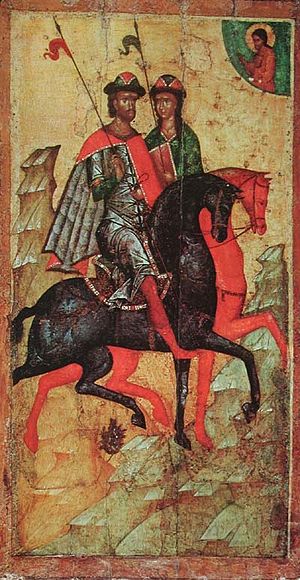 Both were murdered during the internecine wars of 1015–1019. The Primary Chronicle blamed Sviatopolk the Accursed for plotting their assassination. Boris learned of his father's death when he returned with the Russian army to Alta. When informed of Sviatopolk's accession to the throne and urged to replace him, Boris said, "Be it not for me to raise my hand against my elder brother. Now that my father has passed away, let him take the place of my father in my heart."[1] Regardless of having stepped aside, Sviatopolk insisted on having Boris executed. He sent Putsha and the boyars of Vyshegorod to execute his brother. Boris and his manservant were stabbed to death when sleeping in a tent. The prince was discovered still breathing when his body was being transported in a bag to Kiev, but the Varangians ended his life with the thrust of a sword.[1]

Gleb, under the impression that his father was not yet dead, was sent for by Sviatopolk and rushed to his father's death bed. On the way, their brother Yaroslav learned of Sviatopolk's treachery and urged Gleb not to meet him. In the middle of praying to his deceased brother and God, Gleb was assassinated by his own cook, Torchin, who cut his throat with a kitchen knife.[2]

The Life contains many picturesque details of Boris and Gleb's last hours, such as their sister's warning about the murderous plans of Sviatopolk. The narrative is a masterpiece of hagiography, which unites numerous literary traditions. Actual circumstances of Boris and Gleb's life and death cannot be extrapolated from their hagiography. Perhaps the crucial evidence comes from several unbiased foreign sources which mention that Boris succeeded his father in Kiev, and was not lurking in Rostov as the Russian Primary Chronicle seems to imply.

Moreover, the Norse Eymund's saga tells a story of the Varangian warriors who were hired by Yaroslav I the Wise to kill his brother Burizleif. Some historians trusted the saga more than sources from Rus', claiming that it was Yaroslav (and not Sviatopolk) who was interested in removing his political rivals and was therefore guilty of his brothers' murder. Others consider "Burizleif" a misreading of Boleslaw, the Polish ruler allied to Sviatopolk.

Boris and Gleb received the crown of martyrdom in 1015. The brothers became known as "Strastoterptsy" (Passion-Bearers), since they did not resist evil with violence.[3] Boris and Gleb's relics were housed in the Church of St. Basil in Vyshhorod, later destroyed.[4] Boris and Gleb were glorified (canonized) by the Orthodox church in Rus' in 1071. They were interred at the Vyshhorod Cathedral, which was reconsecrated in their name; many other Ukrainian and Russian churches were later named after them.